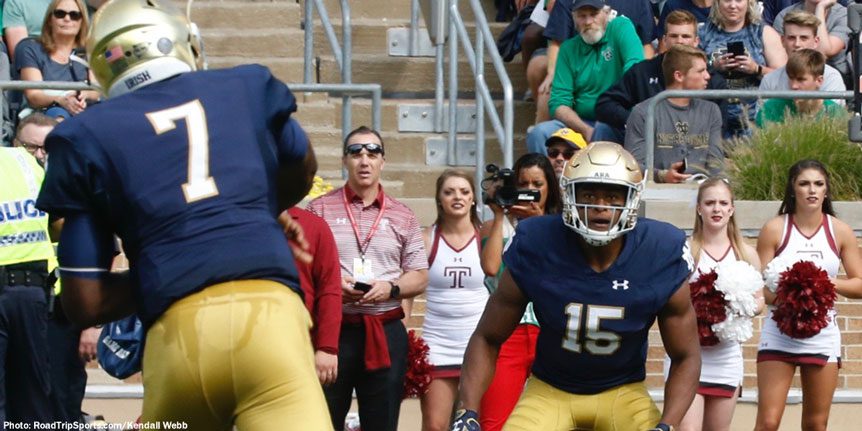 Offensively, coaches are always looking to take advantage of poor defensive alignments or adjustments. When trying to find a quick and safe way to stretch the defense and take advantage of poor alignments, wide receiver quick screens can be a great tool. Quick screens can be utilized in many different ways to get the ball on the edge fast, spread the ball out to a multitude of athletes, and keep the defense honest. Using the quick screen game effectively will force the defense to use extra players in coverage or play man-to-man and tighten down their alignments.

I believe in utilizing three different basic wide receiver screens: Bubble Screen, Now Screen, and Tunnel Screen. At Allegheny, we combined these three screens into a single option concept for our receivers. This option concept allows our receivers to pick what screen they think will be most successful against certain looks. When looking at this screen game, we are able to utilize it in a variety of ways and incorporate it into our run game as well. We tag these screens in run-pass option game with a post-snap read (RPO), run-pass option with a pre-snap read (PRO), or we can lock it in as a guaranteed pass with no read.

The first rule we teach the quarterback, if we tag a screen with a run play in normal down and distance, is that if he CAN throw the screen he SHOULD throw the screen. We call this read the pass-run option or “PRO”. Teaching the quarterback to read the pass first helps differentiate it from the post-snap read for the run-pass option (RPO) game. The idea behind this is that the wide receiver screen game is an extension of the run game. It is no different for us than calling a jet sweep, toss, or option play; it only guarantees getting the ball to the edge and having numbers to block on the outside. The quarterback will give a dead signal to the running back letting him know that his only responsibility now becomes to not interfere with the throw.

The second rule we teach the quarterback is that if the screen is taken away pre-snap it will become a post-snap read and true run-pass option. By doing this we are still sound and gaining a third outlet if the defense tries to bait us by aligning to take away the screen pre-snap, but blitzing or rolling out of it post-snap.

The last way we call the quick screen game is as a locked-in play call. If we know a defense will not take away a particular screen or we want to get the ball in a particular athlete’s hand quickly, we will use this call. We do not call it based on what particular screen we want to run; instead we will call it as a screen option and let the wide receivers put us in the best situation to win.

No matter what formation we utilize, our screens are always locked in as to what each receiver will run. The option part of the screen game becomes who is going to be our screen man and who is going to block. This option call allows our wide receivers to pick what they think collectively is going to put them in the best position to succeed. In our three receiver sets, #1 will run a tunnel screen, #2 will run a now screen, or #3 will run a bubble screen (Diagram 1). If we are in a two receiver set #1 will run a now screen or #2 will run a bubble screen (Diagram 2). The first thing we talk about with our wide receivers is a need to understand who we want to get the ball and the importance of playing unselfish football. If our best athlete is our slot receiver, then we want to find ways to get him the ball. If we call this screen option concept, I tell the receivers they become coaches on the field. I allow our receivers the ability to switch spots, putting a specific receiver in position to run a particular screen. The only person on the field who can always override our receivers is the quarterback.

Once our receivers decide who is getting the ball, our base blocking rule in a three receiver set is to cross block. The reason we cross block is to give our receivers better blocking angles. Wide receivers spend most of their individual time working releases, catching drills, route running, etc. For a receiver, blocking is something that is not practiced as much as other positions. Allowing them an angle to kick out or seal inside gives us an automatic advantage.

In a two receiver set, the base rule is to block the most dangerous man (MDM). When our receivers MDM block they do not have an angle and must square up on the defender and break down to stay under control. We tell our receivers the important thing to remember when blocking for screen game is that it does not need to be a massive collision. Settle down, stay under control, give us time to make one move and burst.

Our coaching emphasis on this route is to give the quarterback an easy target by showing your chest. After the catch is made, wide receivers can make one quick cut off of a block, but they have to get vertical now. Our base technique as receivers is inside foot up with an 80-20 lean, meaning 80 percent of our weight is on the front foot and 20 percent is on the back foot. When we teach Bubble, because we are not firing out, we tell our receivers to keep their weight more evenly distributed in their stance by having about a 60-40 lean. This helps with our first step that we call the drop and roll step. That step is a key component as receivers will actually pivot off their back foot, dropping their front foot, and rolling their body so their chest is to the quarterback. This is all one motion. Their back foot should not move on the first step, only pivot. After that the wide receivers will backpedal straight down the line, keeping their chest to the quarterback, their hands ready to catch, and their butt low so they can be in an athletic position to make a move as soon as they catch the ball.

The way we teach this route is to not get outside immediately. By running this route with the receiver’s chest to the quarterback and cross blocking in a three receiver set, we actually want the receiver to have a two way go on the outside block. After we catch the ball, if the receiver has a clean kick out block on the cornerback, we want to burst inside that block and get back outside away from the rest of the defense. If the cornerback is unable to be kicked on the cross block, but has been squared up or hooked inside, we want our receiver to make a quick move and get outside immediately and up the sideline (Diagram 3). Our coaching emphasis on the Now Screen is to make sure the receivers do not give it away with their stances. A lot of players will relax their stance and stand up too high, which can be a tip for any defense. We want the players to stay low and take one hard step upfield on the snap. After this initial step they should take one step back with their inside foot, get their balance, and show their numbers to the quarterback. After the catch, in a two receiver set, the #1 receiver should read the block of the #2 receiver and make a single move trying to get back outside. In a three receiver set, the #2 receiver should crease the cross blocks, then press to get back outside (Diagram 4). Our coaching emphasis on the Tunnel sScreen is to make sure the receiver is finding the soft spot to catch the screen. We do not want them to get too far back inside where the safety and linebackers are able to make a play, nor do we want them to stay so far outside that the #3 receiver cannot make the kick out block on the cornerback. We teach a three step take off for this screen: big, little, little. This means out of the receivers stance we are taking an initial hard step upfield and then settling with two little steps to get under control, creating cushion from the defense, and creating timing for the throw. The receiver on his third step needs to open his hips inside and try to come back up the stem as much as possible. The receiver should attack the quarterback for the ball, showing his chest for the target, but remembering that if he gets too far inside he will not have any blocking. How far the receiver attacks is based upon the #3 receiver’s kick out block on the cornerback and the block by the #2 receiver to seal the overhang defender inside. We want the Tunnel Screen to crease between these two blocks and immediately get back outside upon getting vertical to avoid any inside pursuit (Diagram 5). Justin Smith is currently taking a year off from coaching. He started with the Gator coaching staff in August 2016. After spending his first season at Allegheny coaching the offensive line, he transitioned to coaching the team’s wide receivers. Prior to arriving in Meadville, Smith spent two seasons at Limestone College, where he served in a number of capacities, including tight ends coach, wide receivers coach, quarterbacks coach, passing game coordinator, video coordinator, and assistant director of football operations, while also assisting with the field goal, kick return, and punt teams. He was responsible for creating opponent scouting reports, creating game plans, conducting all tight ends, wide receivers, and quarterbacks position meetings, and signaled the offensive play calls to the quarterbacks.