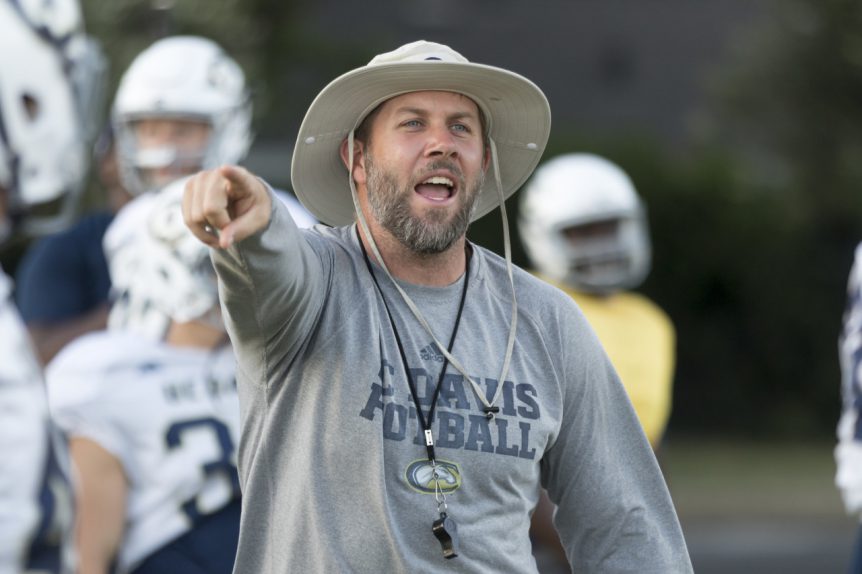 When I first got into the coaching profession I was fortunate to have quality mentors that taught me much more than the X’s and O’s. As soon as it was time for me to hang up the shoulder pads I started volunteering to coach as a student assistant while I finished my degree. One of the older coaches on staff gave me a piece of advice that has stuck with me to this day. He told me to take a few minutes during my commute into the office to reflect. The next day as I walked across campus into the football office I thought about how lucky I am to be able to coach this great game. Then when I got the opportunity to move on to a grad assistant position, I continued the practice of reflection. Every day when I rode my bike into the office I thought about how fulfilling it is to have coach attached to my name. Now, more than a decade later, when I drive into the office I take a couple of minutes to think about how lucky I am to develop young men through the game of football.

Not only do I get to coach football but I get to work with the offensive line. One of the great things about coaching the offensive line is the number of players in my position group I get to work with. It is the team within the team. We have the same number of student-athletes in the offensive line room as our entire men’s basketball team but, they have 4 coaches. Whenever there are 14 to 17 athletes in a position group there is a wide range of ability level and experience. To combat this factor, I try to break my position group into 3 tiers or ability levels. For a high school coach that may be varsity, JV, freshmen. I break up my group into travel squad, basically the 5 starters and a backup tackle and backup interior player. The next tier is the guys competing to get in the rotation, need to get them ready to play next season. The final tier is developmental players, for me, it is the redshirt guys who are developing a foundation. A good offensive line coach can find a way to push the strongest player in the group while continuing to develop the weakest member of the group.

How do you effectively and efficiently coach a veteran offensive lineman while not leaving the rookie behind? My answer was developing coaching cues that apply to everyone in the position group.  Coaching cues are short, specific buzz words that create a visual in the mind of the individual athlete. We are a no-huddle, up-tempo team that practices at a frenetic pace. As an assistant coach, I do not have time to give a detail explanation of a technique in the middle of a practice. The coaching cues allow me to give feedback to a player without slowing down the pace for the rest of the group. A purposeful coaching cue will be just as meaningful to the senior as it will be to the freshman. In fact, if you have done a good job with the coaching cues the other offensive linemen will give each other feedback.

Unfortunately, I have not found a magical cue word that fixes every technique issue. In the offseason, we study our performance and identify any issues that needed attention. The cue word itself is irrelevant. I could walk on to a practice field right now and yell “power angles” and “posture” and the players would not understand the meaning of the coaching cues. For a coaching cue to be effective it must be developed and reinforced. The players in my position group want to know the why behind the technique, which I encourage because it creates more buy-in. In the offseason, we meet as a position group and explain the details of the technique then watch film of good examples as well as bad examples. After that, we develop the coaching cues and how the coaching cues affect the individual player. During our fast pace practice, I have to coach on the run so the coaching cues are the best way to give the players immediate feedback. When we meet as a position group to review the practice I say the cue, explain how it is relevant to the individual player, and say the cue again. Our right guard may get too wide with his base so when I say “power angles” he knows to narrow his base. When I give the same coaching cue to the left tackle he knows to bend his knees because we have watched the film and identified his tendency to play tall.

Starts From The Ground Up

Being an effective offensive lineman starts from the ground up. Proper power angles allow an offensive lineman to be efficient and powerful. The first component of building strong power angles refers to weight distribution. Ideally, the weight should be distributed evenly from the heel to ball of the foot with most of the weight on the inner half of the foot. I like to have the guys take their shoes off in the meeting so they can feel proper weight distribution and build stronger muscle memory. The knees should be just outside the hips and the ankle should be just outside the knee, not shoulder width. The shoulders don’t directly correlate to the hips and knees. A good base starts from the ground up so it does not make sense to use the shoulders a reference point.

The next time you are walking down the hall really focus on how you manipulate your body to make a right turn.  In order to move to the right, you need to push off the left foot. Making a concentrated effort to develop accurate power angle will lead to increase efficiency and powerfulness when changing direction. So many of the issues our players encounter derives from not driving off the inner half of the opposite foot. Whether it is a pass set or drive block, offensive line athletes need to drive on the inner part of the opposite foot.

The next coaching cue I plan to say a thousand times this fall is posture. An offensive lineman without good posture is like a muscle car without a transmission. Correct posture allows an athlete to connect the lower body to the upper body and is made of many smaller components. For us, posture starts with the chin-up which allows for full vision of the defense. Then we talk about spreading the chest while pulling the shoulder blades down and towards the hips. Most importantly, is the reverse arc in the lower back with the core activated. The muscles in the back and post-chain are some of the most underdeveloped and underutilized muscles in offensive linemen. It is only when the offensive line athlete develops posture he can recruit more muscles when generating and applying force. It is important to work with your strength coach to make sure the posture in the weight room is being duplicated on the field and vice versa. The physics of the offensive line position are simple; generate force from the ground and translate that force to an object that is resisting you.

RELATED ARTICLE: Chopping Down The Run: Progressions On The Defensive Line

I have been coaching offensive line athletes for over 10 years and have yet to find the coaching cue that instantly turns a freshman into a 1stround draft pick. Coaching cues are not a short cut for hard work. They do, however, allow you to get a vast amount of individualized information across in a short amount of time. The coaching cues you develop must be specific to what you drill and teach within your program. Have to clearly communicate to players in controlled setting, meetings or pre-practice, what you are trying to accomplish with the coaching cues. This is a great time of year to review last season’s film and identify the issues or deficiency within your position group. Research ways to correct any issues. Get some feedback from the players then go coach them up. Always remember how amazing it is to have “coach” attached to your name.

Tim Keane, who played for UC Davis from 2003-06, returned to the Aggie football coaching staff in January 2016, after two previous coaching stints at his alma mater. The 2019 season is the alum’s eighth as a member of the program’s coaching staff. Following UC Davis’ 2018 FCS postseason run, the first in program history, Keane was elevated to Running Game Coordinator.