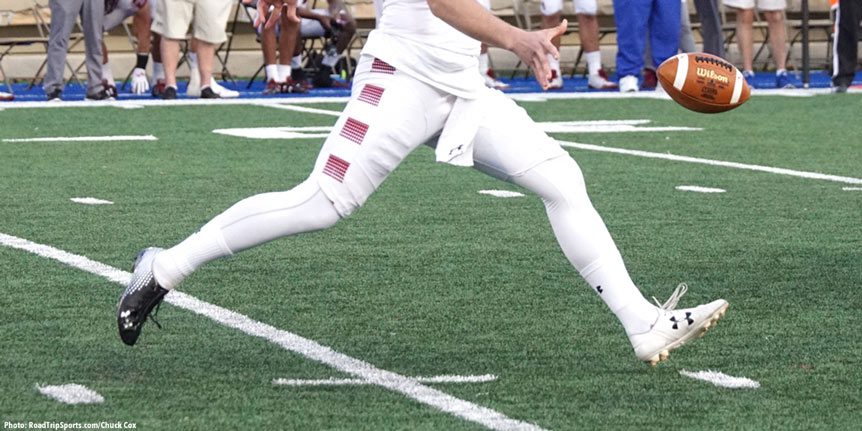 Do you think special teams isn’t as vital a part of the game as offense or defense? Do you ever sit back and think about what type of effect Appalachian State’s win over Michigan and Alabama’s loss to Auburn had on the landscape of college football? Both amazing wins occurred because of special teams plays.

Sooner or later, coaches realize that much like dominant offenses and defenses, stalwart special teams units keep you in the game.

It is without question that get-off is the most important element in blocking a kick and the hardest component to teach. Searching only for speed may not be the answer. The get-off involves quick footwork, retaining low pad level and maintaining balance. We teach a heel-to-toe staggered stance, with the foot on the aligned shoulder back, allowing for tighter and more compact first steps off the ball.

The biggest mistake that beginners make is they take an elongated first step on ball movement, and their chest rises up, exposing more surface to block the rusher. Combined with a flat back, butt slightly raised, and off-arm raised, the player puts more weight on the fingers so he must go forward. The points of emphasis for a great get-off are maintaining a heel-to-toe relationship, exploding out and not up. Little tricks that help the get-off include watching the twitching or tightening of the center’s fingers to anticipate the snap. The mental aspect for the rusher is to get to the blocker’s hip as fast as possible.

The second aspect of blocking the kick is making “the bend.” The bend is when the rusher is even (hip to hip) or just beyond the blocker. Like a defensive lineman on a speed pass rush, as the rusher gets even with the blocker, the inside foot must be planted slightly beyond the hip (toe pointed toward the block point), tight to the blocker’s body. The arm on the same side must rip upward, and the rusher must lean his lower body into the offensive blocker. Once the blocker’s hip is cleared, not only is the foot pointed correctly, but the focus of the rusher should be on the block point and not the punter.

Still, blocking a kick is not guaranteed without a perfect finish. Just like a returner hitting the tunnel, the block specialist now up-shifts his gears and steps on the gas. Much like a sprinter, the rusher’s arms are pumping to maintain speed. Extending the arms too early or too high slows the rusher’s speed.

RELATED ARTICLE: How To Implement Important Fundamentals Of Punt Return

The hands should be interlocked at the thumbs and the arms should be extended on the last step prior to reaching the block point. At the block point, the rusher should push the ball down with his hands. If the rusher is coming from the outside, he should swell with his chest keeping it directly in front of the kicker’s leg. This creates a bigger blocking surface and will help maintain approach speed.

Pushing the ball to the ground on the block gives the punt pressure unit a greater opportunity to scoop and score. The block point should be attacked by the rusher with his eyes on the ball. The rusher should never leave his feet as it will cause the loss of body control thus increasing the chances of hitting the kicker. Each rusher must believe he is the one who is going to block the kick.

Diagram 1 shows the drill used to access a player’s abilities and to teach the proper techniques to block a kick. An intensive film study of the opponent’s punt formations, blocking schemes and operational processes is the first step in developing a punt-pressure game plan. You must ask yourself certain questions.

When it comes to blocking kicks, you must have various techniques already in your toolbox. These techniques allow you to beat a variety of potential blockers.

The simplest of all the techniques is direct hit, or “Speed and Rip.” This involves a rusher using the principles described above.

The “Slant and Rip” technique is used to get inside a blocker who is kicking/sliding to the outside. This slant starts with a 45-degree step toward the gap the rusher is assigned to attack with the second step straight up-field. The coaching point here is to “run the inside leg” of blocker, staying tight to him so he cannot get his hands on the rusher. The slant allows the rusher to dip and rip on the inside blocker with a better angle to escape the blocker and finish closer to the block point.

Another individual technique is the “Up and Under,” or Cyclone technique.  Here the rusher drives hard up-field slightly outside the blocker. This draws the blocker out, allowing the rusher to cross over and back up-field to start his approach to blocking the punt. Moves used to get the blocker off-balance or screening the blocker’s path include a bull-rush, pin, and grab techniques. Diagrams 3 shows how these man-detaining techniques can be utilized in conjunction with the individual punt-blocking maneuvers to block a punt. Film study of the blocking schemes will aid in the development of the punt block scheme. It helps coaches choose techniques in the tool box that could be used to develop a punt pressure scheme to block the punt. When blocking a punt against a shield punt formation, the “two rushers on one blocker” alignment is utilized. In combination with a speed rusher (dip and rip) and a man detainer technique, this two-on-one attack is a solid approach to attacking the shield punt.

Once again, film study of the blocking scheme establishes the techniques and alignment to use to build a punt block against a shield formation. A coaching point in blocking a shield punt formation is to study the shield and how they move. Does the punter stay behind the shield to punt or does the punter rugby kick? Generally, all rushers that get to the shield need to attack the shield at about the same time and hit key landmarks. If the shield moves due to a rugby operation, then the landmarks will adjust accordingly.

Diagram 6 gives an example of using the speed and rip technique in coordination with bull rushes to attack the shield punt. In this case, there was no rugby operation by the punting team. To be a great punt pressure unit, personnel cannot be overlooked. Your block specialists must have great get-off, can drive off the line of scrimmage, maintain balance and make themselves as small as possible. Find the players who can perform man-detaining techniques, keeping the blocker off-balance or screening the blocker’s path with a bull-rush, pin and/or grab techniques.  Using the best players with the best techniques to perform the scheme’s requirements will produce the most effective results.