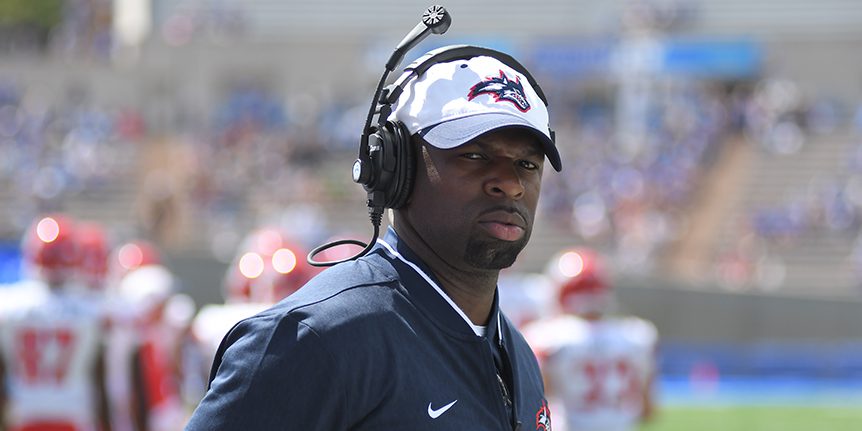 In an RPO, up-tempo offense, there are some skills that wide receivers need to exercise for individual success, as well as the success of the entire offense. Some of the skills require no talent at all, but can be improved with repetition and attention to detail.

Wide receivers in RPO and up-tempo style offenses need to have a great understanding of their responsibilities. First, the receiver group needs to understand the importance of their alignment in spread formations. A receiver’s job is to stretch the field horizontally and vertically. If our receivers understand where they need to align themselves, we are able to put stress on defenses by putting defenders in space where they may not be comfortable deciding whether to read or attack.

When running an RPO and/or up-tempo style offense, I believe it is vital for wide receivers to understand defensive coverage and what the defense is trying to take away from the offense. If the receiver group has an idea of what the defense is doing, it will give them more confidence when executing their assignment. In these styles of offenses, the receivers are involved on every play and have consistent opportunities to turn a small gain into a big play. Having a basic understanding of coverage and the positioning of defenders will allow receivers the opportunity to execute the proper techniques and put themselves in the best position to defeat the defense.

When receivers come in as freshmen, one of the first priorities for a coach is to help them recognize coverages. This is important so that they can play in these offenses and have success. When my receivers are freshmen, I try to keep things as simple as possible. I want to train them to use their eyes and see what is going on in between the lines, as opposed to running around without a purpose. It is critical that they check their near safety. When I teach stance and start, I make it a point to make sure our guys keep their heads on a swivel checking the safeties and seeing the ball. When receivers are checking the safeties as young players, they are looking for two things that should be easy to process if they hustle to the line of scrimmage.

Once they’re able to determine these two things, the receiver can start to prepare for the route conversion or blocking responsibilities prior to the snap of the ball. As a receiver develops and the game begins to slow down for them, the coach can build on these foundational rules by teaching more detail. I have found that teaching these simple rules at the beginning of a wide receiver’s career helps them know where to put their eyes prior to the snap and recognize their correct alignment.

In the past, players were assigned one position and they learned that one position. I have found that, to make the offense more efficient from a receiver perspective, I need to raise the bar and mandate that my players learn the entire offensive concept in addition to the responsibilities of their position. Doing so allows them to have a more in-depth understanding of what we’re trying to do as an offense. This heightened understanding can also promote communication on the field and make it easier for coaches.

In the beginning, there will be growing pains and a learning curve, but the long term benefits are well worth it. Specifically, this understanding allows the outside receivers to keep pressure on the defense and cut down on the time that it takes for players to switch sides on the field. Communication is the key and the receivers have to be comfortable communicating with the quarterback, the end man of the line of scrimmage, and each other. Making sure that the receivers are all on the same page is very important when executing an RPO or up-tempo style offense.

In an RPO or up-tempo style offense that utilizes multiple personnel groupings and formations, creating and taking advantage of matchups has become a major part of the game planning process. On the offensive side of the ball, we are always looking for ways to get our best players in space and/or create a mismatch for a defensive player with our formation (e.g. linebacker on a wide receiver in man coverage). When we create one of these opportunities, it is important that we capitalize.

RPO and up-tempo offenses utilize a lot of three-, four- and five-receiver formations. As discussed earlier, the job of a receiver is to stretch the field horizontally and vertically. As a receiver group, it is important that each receiver executes his assignment to the best of his abilities. Blocking on the edge is just as important as blocking in the box. After the offensive line opens the initial holes, the wide receivers then have the opportunity to turn a three- or four-yard gain into a big play and possibly a touchdown.

If an offense of any type is going to be successful in the run or pass game, wide receivers must be willing blockers. When receivers are willing to block, it helps the running game. When the offense is gaining positive yards in the run game, it may cause the defense to dedicate more players closer to the line of scrimmage to help stop the run. If this is the defense’s reaction, it is likely to result in more one-on-one matchups for receivers on the outside. By giving great effort in the run game, receivers will begin to have more opportunities to make plays in the passing game.

RELATED ARTICLE: Mastering The Art Of The Catch For Wide Receivers

Receivers often have the stigma of being selfish and unwilling to do the things that are necessary for the entire offense to be successful. One of the great benefits that up-tempo and RPO offenses provide is that they keep receivers involved on every play. With the possibility that they could get the ball on any play, it keeps them playing hard. It is critical that receivers read their keys and play with great effort in order to give the offense its best opportunity to execute at the highest level. Wide receivers must understand their role and perform it to the best of their ability.

In closing, after working in both RPO and up-tempo systems, I have realized that there are some attributes essential to successful wide receiver play in these offenses. I really enjoy both styles of offense and how much they have contributed to the evolution of football in the past several years. The skills discussed in this article are ones that I have found help receivers play faster and get them more involved in the entire offense. Implementation of these skills will take some time in the meeting room and reps in practice; however, I believe that once learned, they will help receivers become more well-rounded football players and more effective as they grow in a program.