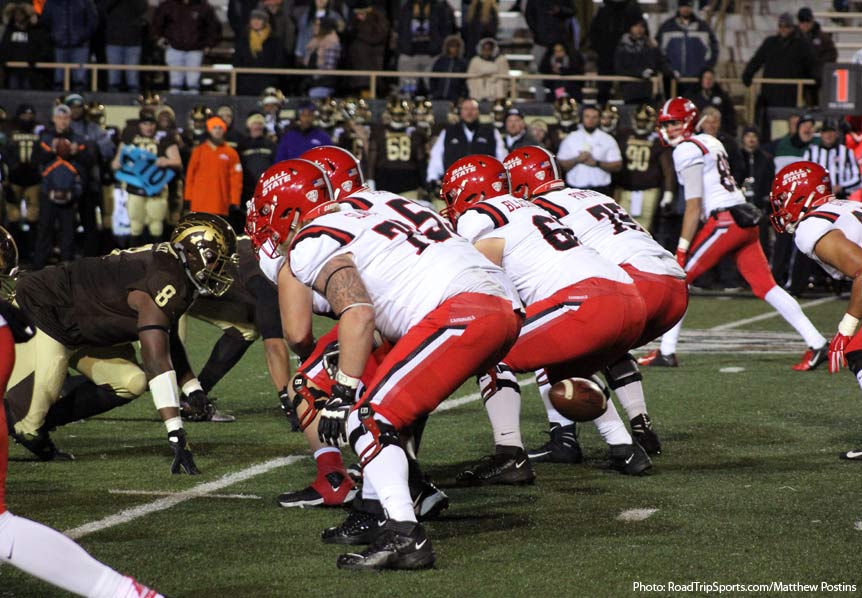 The jump set is an aggressive pass set which allows a pass blocker to get into the defender as quickly as possible. It also allows for a change-up when pass setting a defender. However, when utilizing the jump set, there are some rules that need to be followed to be successful.

As well as having the awareness of defensive structures, the lineman must understand the defender’s alignment, the defender’s pass rush moves and counters, along with down and distance.  The launch point of the quarterback is always critical regardless of the pass set being put to use.

The offensive lineman is attacking the line of scrimmage, quickly reducing and taking space away from the defender. Due to the aggressive nature of the jump set, the pass blocker will set on a flatter angle. Therefore, the aggressive set and the flatter angle of departure will not allow the pass rusher to use certain types of pass rush moves because the space between the pass blocker and defender is reduced.

The jump set will remain the same as if an offensive lineman was working a typical set.

Here are the fundamental concepts of the jump set.

The most difficult move to jump set is the inside move. If the defender crosses the offensive lineman’s face he will not have enough time to react and redirect to the defender’s movement due to the reduced space.  The lack of separation disallows the blocker the ability to redirect and maintain leverage due to the launch point of the quarterback. Maintaining leverage is critical on an inside move when jump setting. If the blocker gets beat on an inside move, the inside hip will open causing the post foot to drop, losing the post staggered relationship and giving the defender a direct path to the quarterback.

Down and distance will play a big role if executing the jump set. For example, if it is 3rd and long, the pass blockers may anticipate a twist game. If one offensive lineman jump sets and the adjacent lineman doesn’t jump set, they are now on different levels and can’t force the switch, thus unable to pass defenders off. Therefore, communication is key among pass blockers. Both lineman need to be on the same page. If not, it will create too much of a difference in the space (not on the same level) of their sets.  Be aware of the pass rusher’s alignment. Don’t ask an adjacent offensive lineman to jump set if a defender is too wide in their alignment. Communication is key!

Film study is essential part of the game.  Studying film will help to understand the defensive structure, stunts, and blitz setups an offensive lineman may face. It is equally important to understand what is happening on certain downs and distances, especially 3rd down situations. Film study will determine if it is viable for the blocker to jump set. A significant aspect to performing the jump set is the awareness of the type of defensive structure and the defender the pass blocker is facing. Another key aspect of film study is evaluating the type of pass rush moves and counters a defender will utilize. Jump setting can be an effective change up when pass setting a pass rusher.  There are certain rules to adhere to along with the visual awareness needed for a successful jump set.