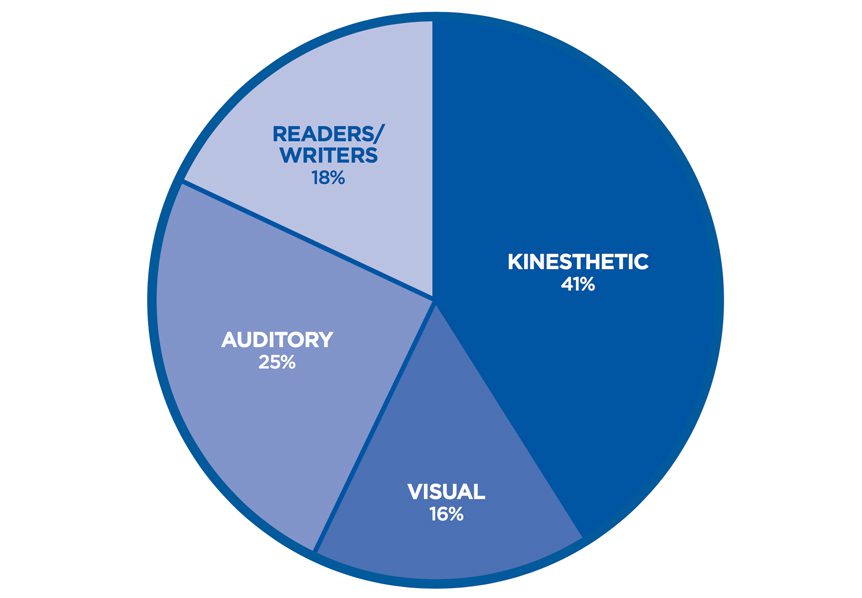 Figuring out different ways our student-athletes learn on a daily basis is of critical importance. Here are some examples and applications of how I cater to a room filled with different preferred learning styles.

Players who are visual learners prefer to see information and visualize the relationships between ideas. Visual learners need to see it!

In my meeting room, I reach my visual learners using several tools. They are more successful learning after they have seen an individual perform the task I am trying to teach them.

It doesn’t matter if it is me demonstrating the technique I want them to perform or if it is an old clip of a former player using the technique successfully. They benefit when the playbook and notes are color-coded as well. It really helps when they can see the connection between our play calls to a certain color.

For example, if all the 21P/12P calls are in green on the install sheet, it helps them see the correlation. I have also had all of our 21p/12p personnel cards at practice and games be created on green paper.

Usually after we finish an install day, I try to get my guys to keep a running chart on all the calls we have installed thus far. The intent of the chart is to allow my players to have a visual picture of what personnel each call is intended for, along with what family each call belongs to. My freshman and summer JuCo transfers have stated numerous times it allows them not to get caught up in the number of calls, but focus on how the call is just a variation of a previous call we have installed.

One of the biggest mistakes we make as coaches is the tendency to teach calls independently. There is no way a player can learn what we do on defense unless he can learn to become a conceptual learner. I try to stick by the rule that if it doesn’t fit a concept we’re running, eliminate it or create some more calls so it can become a family.

Peer teaching on the dry board is a great method for visual learners. In my meeting room, I make certain that I’m not always making the corrections on the film. I like for the guys to watch the tape and tell their peers when they are using techniques incorrectly and how they would fix the problem. I know we don’t believe this, but players get tired of hearing their coaches 24/7.

Finally, my student-athletes who are visual learners love receiving a playbook. Whether it’s a physical playbook or on an iPad, it is necessary to have them available for your players. As I mentioned before, it also helps these learners when the playbook, notes, zone pressures, and calls are color-coded. You can have the players take notes, but visual learners like to read instructions; they struggle with having to create the playbook from their own notes.

Adding daily or weekly handouts with the necessary notes and corrections are essential for this type of learner.

Players who are auditory learners prefer to hear information rather than reading it or seeing it displayed visually. It doesn’t matter if the position coach is explaining a coverage, or a player is asking a question about a blitz, auditory learners are listening. You can sometimes see players with this learning preference use “self-talk” or try to recite rules and little catch phrases to help themselves learn the information. I know we all have that player who asks right after the meeting is dismissed, “So, coach, you’re saying my eyes should go from No. 1 to No. 2 in Cover 2?” Usually the player who is asking you that is an auditory learner and wants to hear it one more time before they hit the field.

It really helps auditory learners in the meeting room if you use rhythms, buzz words, or catch phrases to assist in teaching certain concepts. For example, in Zone Pressures, the Nickel is a No. 3 to No. 2 player unless No. 3 disappears. If this happens, now he is a No. 2 to No. 1 player. My auditory learners easily grasp the catchphrase “No. 3 to No. 2” or “No. 2 to No. 1.” When I ask them something about Zone Pressures, I usually snap my fingers twice. The first snap, they answer No. 3 to No. 2, while on the second snap, they reply No. 2 to No. 1. I believe the rhythm of the snapping and having a rule every time there is a Zone Pressure allows the learners to catch on to the buzz words and catch phrases.

It may take some work, but I believe voice-over corrections and playbooks really benefit auditory learners. It is convenient for a player who may be in his dorm, or even at home for the first session of summer school, to still improve his craft while he is away from the field house.

Players who are read/write learners prefer reading and writing information you want them to learn. The best way I found to reach my read/write learners is by using written tests. I know a lot of coaches aren’t a huge fan of written tests before games, but I like to know what each player knows individually. It also shows me which players I shouldn’t put on the field together.

The tests give these types of learners the opportunity to jot down what they know. I either grade all of the tests myself, or I hand them back to the players and they grade each other’s papers while we go over the answers. I prefer when they grade each other’s quizzes because it allows them to know what their teammates know. It also assists the reading learners once they have their corrected test and can skim over it leading up to game time.

Read/write learners benefit from having playbooks just like visual learners. I have a place for notes in the playbook and in the game plans we give them during the season. The note section allows them to gather their thoughts along with putting things in their own terms. Also, if you have any notes for them or a slide deck, it’s always good to give them a copy of the presentation while you go over it with them. It allows their minds to stay focused and jot down any questions they may have after you finish going over the install.

Players who are kinesthetic learners prefer learning by being hands-on and doing the task at hand. Kinesthetic learners love to be active. Because of this, it can be difficult to reach them in your typical lecture style meeting room.

Luckily, this preferred learning style can also learn from jotting down notes during a position meeting. Like writing learners, the action of writing the notes aids in their learning. I enjoy having my guys draw up the new blitzes we are installing from time to time instead of already having it done on a handout. Sometimes I’ll draw the blitz on the dry erase board, or on the video, and then let the players copy it in their notes section. We go over everyone’s responsibilities and illustrate that in our drawings as well. Usually seeing everyone’s job allows them to grasp the concept we are trying to run, as well as how their role fits into it.

The most successful way that I’ve found for these players to learn is during our walk through. During this time, players are granted the opportunity to perform the techniques or plays being taught. First, we have a special teams walk-through where the coordinator goes over the drills for the day. Next, we usually have a separate defensive/offensive walk-through before practice. During that segment, we will go over the new material (install) for the day, difficult motions, unusual formations, and anything we need to revisit from the previous day. Finally, we go to a walk- through against our offense with a “three hard step tempo” in which both sides get to work their new concepts being installed for the day. With this schedule, it allows these players to learn by repetition.

This leads me to the last piece that I believe is important in reaching your kinesthetic learners: practice and game reps, if they’ve earned them. This isn’t a “Participation Ribbon” deal, however, it is hard to evaluate a player if they never get reps. Everyone should get reps at practice but the reps aren’t equal.

This article was written by Lamar Morgan, Safeties Coach, University of Houston.