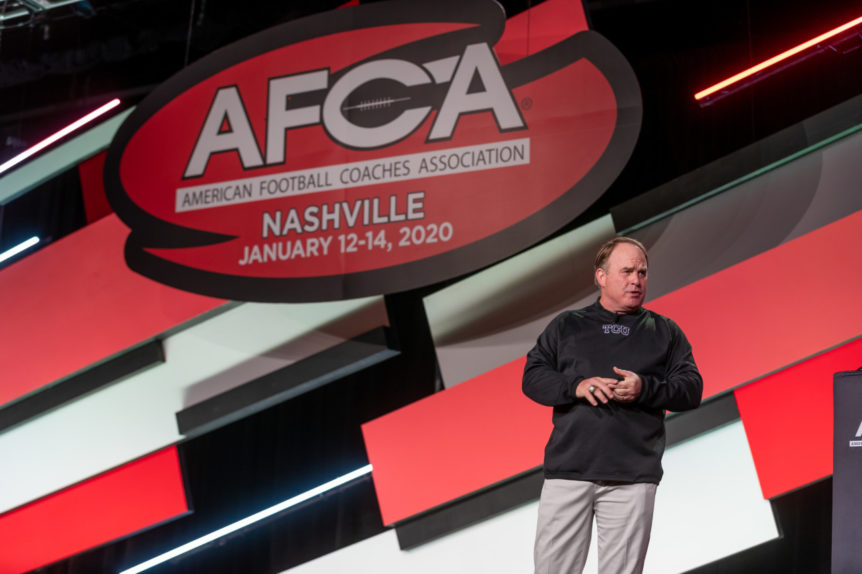 The AFCA’s recently named president, Gary Patterson opened the 2020 AFCA Convention General Sessions sharing a great deal of knowledge and unique perspective on how he has been able to sustain longevity at Texas Christian University. Coach Patterson recently finished his 19th season as head coach at TCU, making him the nation’s second longest-tenured head coach. Over his career, Patterson has been a part of 22 bowl staffs.

Coach Gary Patterson has been named National Coach of the Year by the Walter Camp Football Foundation, Associated Press, American Football Coaches Association, and Sporting News while also receiving the Bobby Dodd Award, Eddie Robinson Award, Liberty Mutual Coach of the Year Award, George Munger Award, and Woody Hayes Award. As a coach with many accolades, in his General Session, Patterson addresses the keys to having continued success over the duration of a football coach’s career.

What Is Your Why?

Patterson begins his talk by stating how he wouldn’t be where he is today if it wasn’t for knowing his “Why.” With passion, Patterson exclaimed to the crowd of thousands that no coach can truly succeed in this profession without knowing their purpose. However, he acknowledged how that doesn’t always come easy.

Coach Patterson admitted it took him a near twenty years to hone his craft, but he knew that is what it would have to take to get to this place of longevity and sustained success. As all coaches know, there is a great amount of development that comes along with being a football coach, but in Patterson’s speech he advised coaches everywhere to use those years of development to superb their skills and ultimately find their why.

Be Careful Who Defines Your Good

Throughout the entirety of Patterson’s General Session, he talked about his wife, Kelsey, his three sons, his friends, and his staff with such grace and compassion. He specified that a successful career stems from huddling around people that you care about and can trust no matter what. Over his 20 years coaching at TCU, Patterson has had hundreds of staff members coach with him at some point in his head coaching journey. Patterson truly believes that surrounding yourself with people who have a common good in mind will lead to more cohesiveness throughout all walks of life. When specifically referencing Patterson’s definition of ‘good,’ he addressed, “If your standard is to just win ball games, then you don’t know what it means to be a coach.” To Patterson, being a ‘good’ football coach is so much more than what the record books may show. He has had immense success in the role of head coach at TCU, due to the people he has been surrounded by, the players and staff he has been able to foster, and the culture he has embodied ever since he stepped into the role a near 20 years ago.

Know The Definition Of Coach

Coach Patterson’s General Session is all about the gridiron mentality he has been able to polish over the course of his coaching career. Throughout his session, he talked about the little things, such as the importance of putting your phone down, flipping the switch from Coach P to Gary, and mastering the things that take no talent.

Coach Gary Patterson has stepped into the role of AFCA President for a wide variety of well-deserved reasons. Predominantly due to his profound knowledge of the game, his highly experienced coaching background, and the mutual trust that he has with fellow colleagues in the coaching profession. Tune into the AFCA Educational Library to hear his first appearance as the 96th president of the AFCA!

To watch Coach Patterson’s General Session speech, along with numerous other videos and content, please log in to your AFCA membership account and search through the AFCA Educational Library.