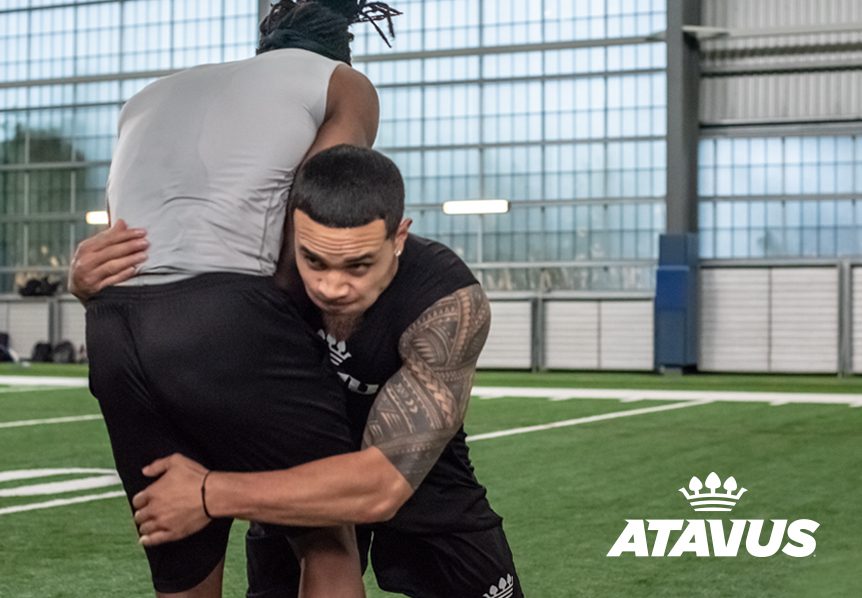 For many football coaches, the concept of “shoulder-led tackling” made its debut in July 2014 when Seattle Seahawks head coach Pete Carroll published the Seahawks Tackling video for all to see. For many, it opened their eyes to a tackling method that not only took the head out of the tackle — thereby increasing safety — but helped defenses tackle more effectively, which dramatically improved defensive efficiency.

That style of “shoulder-led tackling” was not altogether new, but rather had been in use in the game of rugby for many years. In fact, it was a man named Waisele Serevi, founder of Serevi Rugby, who met with Carroll to talk about the benefits of shoulder-led tackling back in 2014. In June 2015, he rebranded Serevi Rugby to Atavus and launched Atavus Football just one month later.

This meteoric rise comes as no surprise to Kerry Carter, Vice President of Football Operations, for Atavus. Carter played college football at Stanford University where he is still 7th on Stanford’s career rushing list, 4th in career rushing touchdowns, and 7th in career touchdowns. He played professional football for the Seattle Seahawks, Washington Redskins, and Montreal Alouettes, with which he won two Grey Cups.

“Every position group on the field has specific reasons for performing their drills. If an offensive line struggled in their pass protection or getting up to the second level, they’re going to be working on it in practice that week, you can believe that,” he says. “But, tackling never really got that attention. The measure of performance has always been, did he miss it or did he make it, not how many times he tackled, his miss/make percentage, and a lot of other data points that can inform how coaches do what they do best, which is coach up their guys.”

Primarily, Atavus wants the tackler to align his spine and keep his head up through the tackle, instead of the old “head across the bow” method. Furthermore, the tackle doesn’t start with contact, it actually starts with pre-contact and Atavus breaks that up into a number different steps they teach as tackling technique. On top of that, the tackle continues after contact as the defender drives his tackle through his opponent, thereby limiting yards after contact. If you want to know the rest, you’ll need to either contact the company or go through their online certification process, which recently launched in the U.S. Five-time Pro Bowler, champion, and the No. 1 rated linebacker by Pro Football Focus for the 2017 and 2018 seasons, Bobby Wagner, believes in shoulder-led tackling. He is an Atavus Ambassador sharing his perspective on tackling technique at the college, high school and youth levels. Wagner puts a fine point on his interest in shoulder-led tackling, saying when he goes to the weight room, he’s working on strengthening his shoulders, not strengthening his head.

“Partnering with Atavus is one way that I can promote safer tackling,” says Wagner. “I’m a firm believer in tackling with the shoulder instead of the head. Atavus does a great job educating coaches and youth players in this technique, and I can bring a player’s perspective to a younger generation.”

Carter says that on top of teaching proper technique to improve safety and performance, Atavus also provides what it calls Tacklytics, which are data-driven actionable insights to help football coaches make informed decisions about improving their
team’s tackling performance.

“Data by itself is like unrefined, crude oil. It is not the be-all, end-all,” he says. “You have to take that data and refine it to make it useful. For us, that’s all in the way the data is translated. Without that translation, the data is not valuable.”

For their upper-echelon customers, Atavus reviews game film, observes every tackle using onsite analysts — many of whom are former football coaches — grades each tackle, then through the magic of the Atavus platform, provides results in a report that also contains coaching points on how to improve, including player recommendations and specific drills to improve technique. These reports are ready for coaches when they need them the following week.

“We look at this from the perspective of a coach,” says Carter. “What’s he doing on a day-to-day basis? Watching film, practice planning. Sure it’s great to get a bunch of data from us, but what does it mean? Why should the coach care? When we are watching film and grading a game, we are always asking ourselves, ‘How does this help the coach right now?’

“If we can give a coach more direction in terms of the best way we feel this data can be used right now, to help you as a coach make better decisions, for you to communicate easier with a player, for the player to understand it, then for them to go out and execute, that’s what we do for coaches. Players want good feedback. Coaches want good feedback. We translate what we see, based on our expertise in tackling, into detailed instructions or actionable insights that coaches and players can use to get better right now, today.”