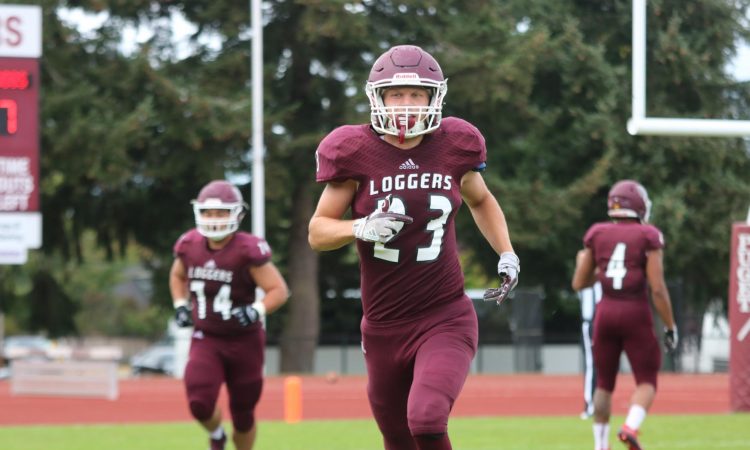 As a spread offense, it is our job to put our athletes in space in a position to win.  At the University of Puget Sound, we believe in using base principles and techniques to displace the defense and puncture their core.  We will win one on one battles, however, should the one on one battle become a difficult task, we will look to get four legs on two legs (double team on the line of scrimmage) or use angles (Pin and Pull) to win the advantage.  We will find a way to eliminate players from the play.

As coaches, we all want to train, recruit, and develop situations where our X can point at their O and win across the board.  This is the base way we teach our zone run attack.  We start with a simple count system that gives our line of scrimmage players a general understanding of their directional responsibilities.  However, the alignment of, or how good the defense is, can make this an almost insurmountable task.  Therefore, we use combination blocking to help get four legs on two legs at the line of scrimmage in a position to win through the combo backer.  This offers us a secondary advantage of a two on one, but there are times when that defensive player is in a better position to win against our two.  They are either holding our release to the second level, or they are just a great player that is splitting our double and wreaking havoc.  It is because of these situations that we have added pin and pull elements to our outside zone concepts.

The idea of our outside zone is that we will displace the defense horizontally with the intent of puncturing its core.  Our job as blockers is to attack like we are going to beat the defense to the perimeter. If, and only if, the defense declares that they do not want this to happen through aggressive outside pursuit then we will hinge hands, pushing with our backside (away from the direction of the call) hand and pulling with our play-side (direction of the call) hand, to shot put the defender out of position using their aggressive fight for leverage against them.  This horizontal stretch will open a vertical seam for our running back to hit with their shoulders square to the line of scrimmage at full speed.  The only thing that hurts the play is penetration upfield by the defensive line.

Our base technique at the line scrimmage is a Slide step.  This is a horizontal six-inch step to gain a lateral advantage.  Our second step is a 45-degree attack step punching the backside hand through the play-side number of the down defender.  If the defender stays, we create a long arm push at this angle.  If the defender fights the reach and tries to work up field, we stunt penetration (stop their upfield push) by locking with our play-side hand and using rotational force to shot put the defender flat outside to open the seam.  If the defender stunts inside we keep long arm pressure on the defender and shuffle to square, throttling down from our 45-degree run, then hinge hands and bury the defender flat inside.   Every lineman learns this base technique day one as all of our two and three-man combos are built from this base principle.

A Bucket step is a 10-inch drop stop where the lead foot is aiming to the outside shoulder of the down combo defender.  A bucket for us is like an open pull for some.  We plan to cross over on our second step and demeanor sprint, or duck demeanor to some coaches.  We are attacking the combo like we do not have a front-side (direction of the call) player, and we need to win the reach alone.  Our job as a combo player is to piggyback with our teammate.  We want to close all space to stop any penetration while keeping our eyes through the near knee of the down lineman to the combo backer.

Skip pull, which I have also heard called carioca pull, is a cross over pull that allows the athlete to get quickly running laterally by giving ground early and staying square to the line of scrimmage.  We use it on our cut off block concepts, as well as our pin and pull concepts.

A Down step is used when we are having trouble with the down defender and we are going to cut our zone (our back will not cut back inside of a Down block at the line of scrimmage) and we have decided to adjust to a pin and pull scheme.  Down is a flat step inside with a contact point at the near hip of the down defender.  Contact should happen on the second step, covering up the down defender with two feet in the ground in a position to fight pressure.  The goal is to stop penetration and wall the inside of the zone.

We also use three-man combos to attack gap exchange and stack-based teams.  Play-side Guard to Tight End is a Tri Call.  Center to play-side Tackle is a Tric Call.  Front-side and Backside rules and techniques apply.  Each player needs to be decisive in their declaration and finish. Teaching the Running Back

Before I get too far ahead of myself I need to mention that the back uses the same footwork and aim point from every position they take a handoff from in our offense.  Our back takes an open step, which is a gain ground pivot step of the play-side foot and aims at a point of two yards behind the middle of the Tight End.  We want the defense to believe he is running for the perimeter, as this is the primary goal of the play.  If nothing shows, the RB should break the run outside.  If any player crosses his path, he should plant his foot and Bang the run north/south with his shoulders square to the line of scrimmage.  The goal of the Bang should be to cross the line with a three-way go, meaning he can break back outside (climb the ladder), Bang (stay north/south) or he can Bend our outside zone play back across the plain. Our back has to understand that there are no negative plays allowed.  They need to be decisive in their reads and actions.  Get four then score, is a phrase we use to emphasize getting positive yardage aggressively.

We are a zero identify team.  What I mean by that is we match our blocking structure by count to the defense.  The first defender to the play-side is 0. The numbers then count up going out towards the play-side perimeter.  The first defender backside is Negative 1 and the players count down going backwards.  When match out blockers to these numbers based on the call side.  The Center always works towards 0. This allows us to get a better idea of where our linemen are going, and with no other information we can get on track in our zone schemes towards the correct man and the back can make us right.

Because of leverage and skill we understand that on Outside Zone Man for Man blocking is not likely going to yield the desired results, we, therefore, look for the best way to get four legs on two legs at the line of scrimmage.  Below are some examples of how we block our outside Zone. In the examples, we are using a mix of our three-man combos and two-man combos. The technique of aggressive, decisive declaration, will set us on a path to be right and force the defense to over commit, and thus be wrong.  We will take players where the want to go, farther than they want to go.  The blockers’ job is to stay lateral and strong working to a 45-degree track.  Once they decide to declare, they need to violently shot put by, or definitively pin inside.  Be decisive, and stay locked on the defensive player.

Below is our Pin and Pull Combos.  We have the ability to Pin and Pull at every position on the line of scrimmage. We added the pin and pull adjustment for two reasons.  One is for a defensive player that is beating our double team.  A player that is wrecking our backfield and we will admit is a good player and use angles to win the battle against him.  The second is when a player is using a “soft shoulder” technique on the front-side of our double, or as I like to call it, the defensive lineman is holding our combo player from climbing to the second level, wasting two blockers on one and leaving a free running backer.

The key to executing pin and pull schematically is to work them into the same combos.  Using the examples above of down block and skip pull, we are able to eliminate a player and still run our outside zone scheme using pin and pull.  While we want physical and aggressively create movement in all our blocks, the key for the down blocker to remember is we cannot let the defensive lineman chase our puller, or spin out.  We need to lock the defensive lineman at the line of scrimmage.  Pullers need to know if they are man free pullers or combo replacement pullers.  A man free puller skip pulls to the combo player tracking as if they were a climb player.  The combo replaces puller takes the spot of the down player in the combo like they are a “Piggyback Player”.  The combo replacement pull needs to focus on the near knee of the down lineman through the combo backer.  They need to be ready for a spike by the down lineman at all times.  See opposite jersey, destroy opposite jersey.  On second level players, just like on first level players, we want to aim to win the overtake, but if they declare, we will shot put and run them further than they want to go. Outside zone has become our best run play because it uses the tactics and technique of the defense as an advantage for our team.  Wherever they declare, we will aggressively displace them to open up the seam.  Our backs will press the edge and look to break the run outside, or stick the foot and get north-south.  The play can hit like toss, like middle, or like inside zone.  We will find a way to hurt the defense where they are weak, using their aggression and fit against them through declarative action.  If they have a player up front or are using a technique that hurts our scheme, we will use pin and pull to eliminate that player and work it into our base concepts to put the defense under constant pressure.  We will stretch them horizontally to puncture their core.

Rob Clements joined the Pugent Sound staff after spending the previous four years at Raymond High School (WA), serving as head coach for the last three seasons. Clements was a four- year starter for the Loggers on the offensive line from 2001-2005, earning All-NWC honors his junior and senior seasons.