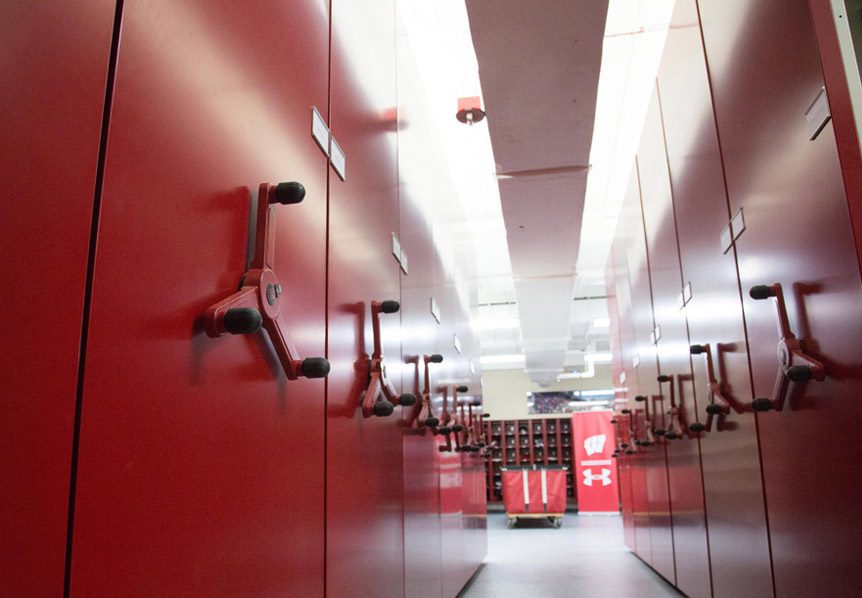 Up until a few short years ago, the equipment room at the University of Wisconsin looked much like the vast majority of equipment rooms across America. It was dominated by ad-hoc shelving and cabinetry.

The Badgers faced the same issues as other football programs using this sort of storage approach. Items were getting lost, stolen or simply misplaced, and those weren’t the only problems.

The number of coaches, the amount of equipment dedicated to individual players, the variation in that equipment, all of those things have continued to grow. But for most equipment managers, the space in which they store the equipment has not grown along with it.

“More and more sports teams are growing in roster size, and the number of coaches is growing too,” says Sam Wrobel, equipment manager for the Wisconsin Badgers football program. “The apparel contracts are better and allow us to get more and more for our athletes. We have so many items we can provide for athletes that having the actual storage space for them is really crucial.

“There was a time when we’d get just a couple pair of shorts, a couple t-shirts and a single set of sweatpants for an athlete. Now, it’s four or five pairs of shorts, six or seven t-shirts, cleats, socks, pretty much whatever they need. Having the space for all that is critical.”

Several years ago, the Badgers installed a brand-new Montel high-density storage system for their football equipment room, and access to equipment — plus the security of that equipment — has never been better.

“We installed 12 high-density storage units — six on each side of our equipment room — to create an aisle,” says Wrobel. “Our campus is landlocked, and it wasn’t designed with a huge equipment-room space in mind. We have to make do with the space we have. Thankfully, the new installation has saved us probably 50 percent of our available storage space.”

Perhaps one of the more under-appreciated aspects of Wisconsin’s new equipment storage was their ability to customize storage specifically to their needs.

“When we were preparing to do this, we met with the manufacturer and designed each aisle specifically for what we wanted,” says Wrobel. “We customized each aisle to maximize storage. The helmet aisle has all the slots for each helmet to go into, so we’re not just throwing them in there. Every aisle essentially has the functional purpose so that we can
get the most efficient use of space from it.”

That customization makes it not only easier to organize specific equipment types, but it helps when managing student equipment managers as well.

“We have five student workers that help [head football equipment manager] Jeremy [Amundson] and me,” says Wrobel. “Even if we need to have them get a specific pair of cleats for a linebacker, it’s easy for them to do it. It’s easy to explain it. We’re able to have everything organized by size, and more or less by what position. So even if Jeremy or I can’t get back there to grab a specific item, we can easily explain where it is.

“Plus, it’s all neatly organized. There’s nothing just randomly thrown in a corner.”

This customization not only looks great, but it saves equipment managers time. The fact is, it doesn’t matter how much work piles up, there are only so many hours in the day. It’s critical to be streamlined and efficient if you want your equipment room to run smoothly.

There are other aspects to storage that aren’t readily apparent to coaches unless they’ve been spending a lot of time around equipment rooms. For example, eliminating sharp corners and exposed edges can save programs money. Rounded edges prevent accidental ripping and tearing.

Now, extend that across not only the football program, but equipment storage for multiple sports and you can begin to understand how something as simple as rounded corners can keep an athletics department from throwing money down a hole.

“Obviously, we budget for extra items in certain areas, but there are some things that we don’t order a ton of extras,” says Wrobel. “Most schools don’t have the ability to order lots of extra items in general. Rounded corners and soft edges are simple, but they’re effective.”

The Badgers also looked closely at the finish of their new storage units. They wanted a smooth, powder-coated finish that would be well-ventilated. This wouldn’t necessarily occur to most coaches or administrators, but a smooth, clean, well-ventilated finish keeps equipment dry and in the best-possible shape.

“Often, we’ll get shirts or sweatshirts in that aren’t going to be used for months, even until the next season, and so of course, we’ll store these items in back of the equipment we’re using right now,” says Wrobel. “So, we wanted to make sure that everything was well-ventilated.

“If we have it on a well-ventilated shelf, then it’s not getting moldy or sitting in the back corner of some closet. When we do issue it, it comes out looking brand-new. A properly finished helmet-storage unit means we aren’t putting a ton of helmets one on top of the other. Each one has its own cubby. This absolutely prolongs the life of the equipment we use.”

Proper equipment storage is also a major consideration during practice and on game day. There is certain equipment that is completely necessary and requires a backup plan for on-demand distribution.

“We have about 10 equipment trunks that travel to games with us, essentially serving as a traveling equipment room,” says Wrobel. “When we’re on the road and someone breaks a shoelace, or forgets to pack a knee pad, we need to have replacements ready. It’s not good enough to not have an item that needs replacing. We have backup cleats for essentially everyone who’s playing. If we do have an issue, we can usually get a player a pair of new cleats so they won’t be missing any playing time.”