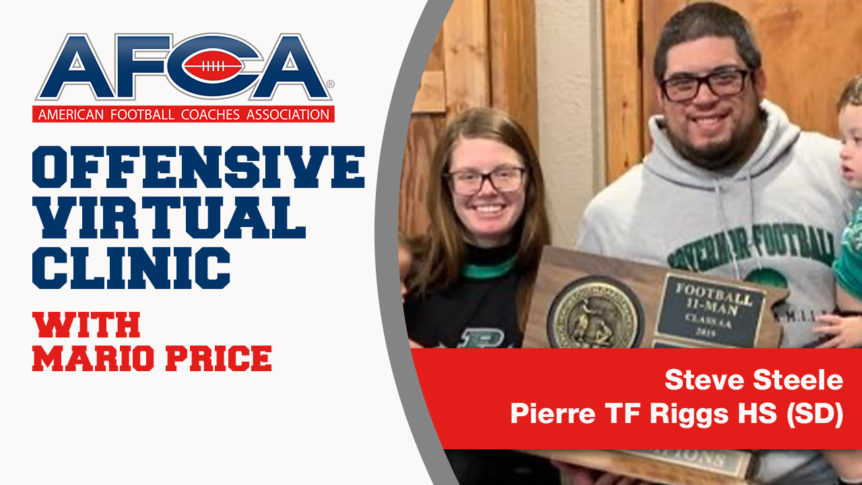 In this virtual clinic session, Steve Steele, Head Coach and Offensive Coordinator at Pierre TF Riggs High School (SD) discusses the unique offense in a box system that incorporates the use of wristbands for athletes.

As a 26-year old NAIA offensive coordinator, Coach Steele had a desire to become a head coach. With this aspiration in mind, he committed to put a unique and different product on the field that hadn’t been seen before. He also committed to “recruit the hallways” to engage people in the football program that normally wouldn’t get involved. These goals along with his passion for community involvement led to the creation of the offense in a box system. This system utilizes a wristband for each player. Rather than calling out several tags for each play, players are able to look at their position-specific wristbands for their assignment on any given play.

Some of the key reasons for the offense in a box wristband system include flexibility and minimal memorization for athletes. With the limited memorization, coaches can implement more formations and play at any desired pace. This system also allows the program to keep trending up.

This means coaches can easily change formations and plays each week without hindering the knowledge or performance of their athlete. Another advantage of this system is the decentralized command it offers. The athletes are empowered to make decisions based on the assignments listed on their wristbands.

Coach Steele explains that coaches should teach the process of getting signals and reading the wristbands in camp so that during the season they can switch formations and plays at will. This means that more and more formations can be implemented throughout the season. With that being said, Coach Steele and his staff always have two formations and two plays that have not been put on film.

Adding formations and reserving some that have not yet been seen on film frustrates defensive coaches and players. Adding some “weird formations” is one benefit of the offense in a box system. The players do not have to remember the “unusual alignments and formations” because the wristband communicates those assignments. With so many changes throughout the season it is important for the coaches to write clear and concise rules and assignments on the wristbands. This takes away excuses for missed assignments.

This system can be implemented through meetings and indy periods. Teaching the lingo on the wristbands is crucial, but it does not necessarily have to be done during team periods. Once players understand the wristbands, the cooperative language allows for players and coaches to be on the same page with the same expectations. This empowers the athletes which creates buy-in.

As Coach Steele mentioned, he truly desires to engage and involve others in the football program who normally wouldn’t be involved. This led to the recruitment of the “math whiz,” an elite student, who runs the analytics portion of the game at Pierre TF Riggs High School (SD). He, along with the other booth coaches keep spreadsheets to see which player is having the best game. It allows for the coaching staff to see which player has the hot hand and which plays are working the best.

Q: How do you apply the analytics you mentioned during halftime?

A: We get a spreadsheet with a breakdown of which player is doing the best and a points per carry or points per target, so it’s a matter of looking at that chart and determining who has the hot hand and which plays are working the best for us.

Q: Were you nervous when you first implemented this new system as a first-year head coach?

A: Oh yeah. It is a big change, so you have to make sure that the athletes buy-in and trust you. Everyone else will follow. The parents will enjoy seeing their kids bought in and enjoying what they are doing. At the same time, it becomes fun because you can mess with so many defensive guys.

Q: How much paper/printing do you do over the course of a season?

A: We used four versions (printouts) of wristbands this past seasons. It takes about half an hour of work for each version you print. It’s approximately 15-20 pages of paper per-version.

Q: How do you discipline athletes who lose their wristband before games?

To watch Coach Steele’s Virtual Clinic, along with numerous other videos, please log in to your AFCA membership account and search through the AFCA Educational Library.