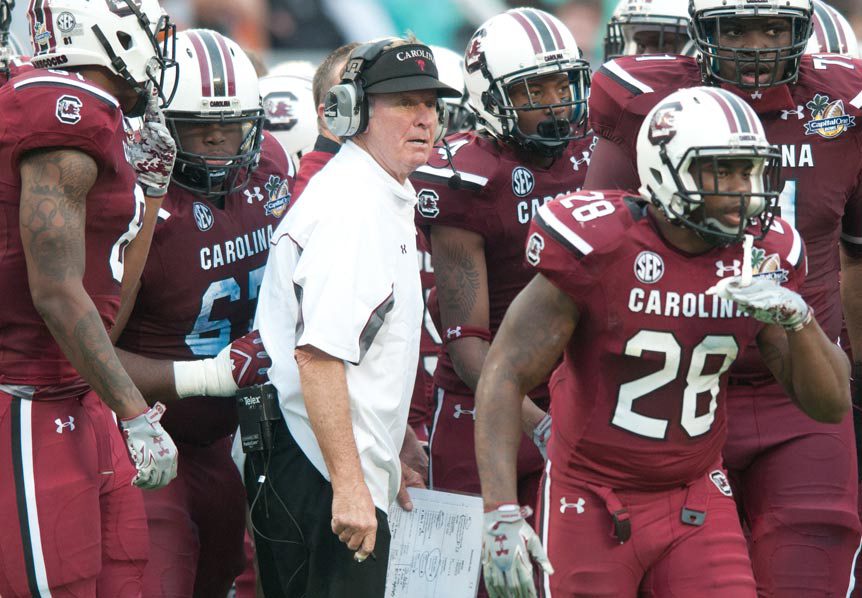 There’s only one Steve Spurrier.

The same could be said about any iconic head coach, but in a profession full of copycats, Spurrier stands out as an example of someone who found his own way. In the process, he helped transform football into the game it is today.

Spurrier says he never planned on being some sort of pioneer. He simply chose the path fitting of his personality. It just so happens his personality is unlike anyone else’s.

“I tried not to talk like the other coaches,” Spurrier says. “Seemed like when I was coaching, almost every football coach in the world would use the words ‘great,’ ‘football’ and ‘excited’ in the same sentence all the time. So I tried to find some new adjectives.”

Candid media interviews and good-natured banter became a Spurrier trademark over the years, but his individuality goes far beyond his superb vocabulary. At a time when the SEC was known for lights-out defense and running the football, Spurrier brought Duke’s “Airball” offense with him to Florida. The scheme soon became known as “Fun and Gun,” a fitting term for a coach whose approach seems to stem from the old cliché of working smarter, not harder.

“There are two ways to be successful in life: you can do it like everybody else does and try to outwork them, or you can do it differently,” Spurrier explains. “I definitely thought differently was the best path to success for our teams.”

What may strike some coaches as a relaxed philosophy is really nothing more than Spurrier being himself. Spurrier says his teams always tried to conduct their business “the right way,” but he found no reason to run his staff into the ground chasing a competitive advantage.

“You can watch film all night. You can sit there and watch one game for two or three hours and call that work, or you can watch that same tape for 35 minutes and feel like you’ve got a good feel for the competition.”

Coaching football successfully is hard work no matter how you approach it, but it only becomes harder when coaches try to be someone or something they are not. While coaches may criticize Spurrier’s philosophy, it’s hard to argue with his results.

Countless coaches have found success by outworking their opponent. Piling up the hours represents one successful coaching approach; Spurrier’s way is another. But there is no limit to the number of successful coaching philosophies, any more than there is a limit to coaches’ personalities or backgrounds. Maybe that’s why one of the hardest accomplishments as a new football coach is finding a style that meshes well with the individual.

Coaches spend most of their careers working to bring people together, but at the end of the day, every team is made up of individuals – including the coach. Spurrier encourages coaches who choose to approach the game with a workaholic mindset to make sure they remember to take time to care for themselves.

“Get away from your job. Find some stress-free activities,” Spurrier says. “Don’t be consumed 100 percent with your job the whole year. Have ‘get-away time’ so you can recharge your batteries, and get ready to go full speed when the season starts.”

Winning football takes year-round commitment, and coaches who feel they are too busy to have some fun are often the coaches who need a break the most. Proper recovery is just as critical for coaches as it is for players.

Spurrier has received countless accolades over his storied career. He is a Heisman winner, a National Champion, and a member of the College Football Hall of Fame as both a player and a coach. Yet, with all these bullet points on his resume, his greatest accomplishment may be his uncanny ability to just be himself. The highest levels of success never changed the “Head Ball Coach.”

“I’ve been blessed way beyond my wildest expectations,” Spurrier says. “For some reason I’ve had a bunch of awards and honors, and I’m thankful.”