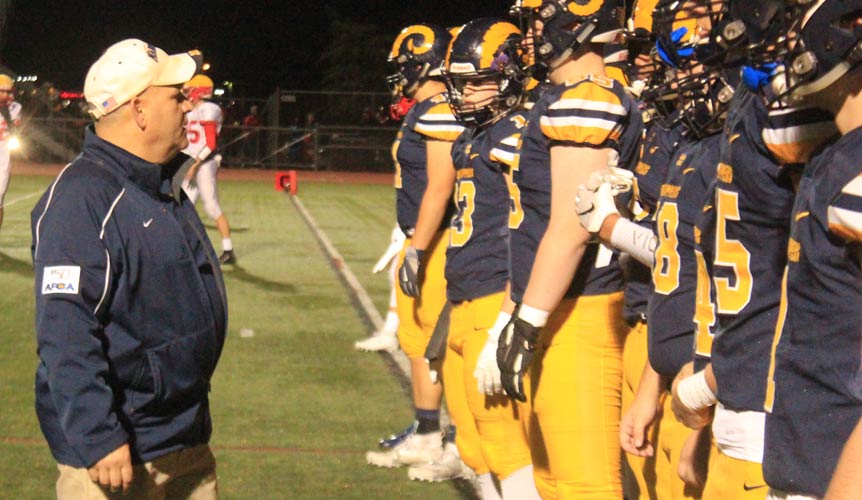 Most football coaches feel the weight of expectations.

Whether those expectations come from within the program, the local community, or even from public perception on a national scale, expectations abound in the coaching profession.

For the Marquette University High School (MUHS) football program in Milwaukee, Wisconsin, expectations seemingly ascend to new levels each and every year. This year was no different.

Coming into the 2019 campaign, MUHS Head Coach Jeff Mazurczak’s crew was poised to make another deep playoff run, having earned a spot in the quarterfinals of the Division I Wisconsin Interscholastic Athletic Association Playoffs five times in the last six years.

And who would their first opponent of this promising new season be? They faced none other than their final opponent of the 2018 season, the reigning state champions from Muskego, who had edged them the year before and ruined their hopes for an unbeaten season.

The rematch would end in much the same way, with the Warriors taking a hard-fought victory, 14-10.

While starting 0-1 is less than ideal, it was far from the end of the season for MUHS. But the situation quickly snowballed on the Hilltoppers, dropping their next two games and suddenly finding themselves at 0-3.

If there was to be any chance of continuing their recent run of success, the team needed to stop the bleeding – in a hurry.

The famous boxer Mike Tyson once said, “Everyone has a plan until they get punched in the mouth.” After starting the year on a three-game skid, the MUHS coaching staff was certainly feeling like they had been, and their mental toughness was being put to the test.

Fortunately, in times of adversity like this, Mazurczak knows exactly where to go to find the support he needs. First and foremost, he looks to his family.

“[As coaches], we’re all fortunate to have wives that allow us to get out of the house six days plus a week to be little boys and be involved in football, in a game,” he says.

Beyond the support of his family, Mazurczak leans on his staff. Having been involved with the program for over three decades, he realizes that if they can’t solve their problem with the great group of men he is surrounded by, they likely won’t solve it all.

The last place Mazurczak draws strength from in times of adversity may be the most obvious, and yet underutilized – his players. “In the 30 years I’ve been here, the best teams we’ve had have been player led,” he says.

But in order for a team to be able to rely on player leadership, coaches have to set processes in motion that intentionally develop that leadership. Mazurczak and has staff have been working hard at finding increasingly better ways of doing just that.

About 10 years ago, they started the Junior Hilltopper program for grade-school athletes. From the time players come into that program, until the time they are seniors, the MUHS staff instills concepts within them like responsibility, compassion and excellence both on and off the field.

Years later, as players get ready to write their final chapter as Hilltoppers, Mazurczak goes out of his way to talk to the seniors about the standard they want to set for the next generation, and the legacy they want to leave.

Practically, on a week-to-week basis, the MUHS staff constantly forces players to think like leaders. The players who have “been around the block” take those who haven’t under their wing, and the interaction makes both groups appreciably better.

“And, it also gives that senior the opportunity to coach and sometimes you learn more about the sport by coaching, and it really augments the playing aspect of it.”

In the eye of the storm, with no apparent reason to be calm, and seemingly every reason to panic, the UMHS staff took inventory of the situation.

On the one hand, the team had performed admirably in terms of their attitude, preparation, focus and effort. On the other, they were an 0-3 football team. So what gives?

“You have to know your team and you have to know the personality of your team,” Mazurczak says. “We might’ve had a change some of the script if we weren’t getting great effort or if our shortcomings were effort or philosophy related.”

After evaluating the film, doing their best to set aside their emotions and personal biases, the staff came to a simple conclusion – the team was on the right track. Regardless of the story the wins and losses told, they simply needed to make a few more plays and tighten up their execution.

How could the coaching staff, who had been unified in the same message practice after practice, and year after year, abandon the process that they believed in? What message would it send to the players, after telling them all offseason not to worry about results, if the results dictated to the staff that the process of getting better required wholesale changes after three tough games?

As simple as it sounds, provided the effort and discipline is there, sometimes a team just needs to put their head down and keep grinding. And that’s precisely what the Hilltoppers did.

“The whole while our coaching staff did a terrific job of maintaining positivity and building these guys confidently. We had some injuries, so we had to put energy and focus into getting the next guy ready. We’ve always been a next man up mentality, but at one point in the season we had lost four defensive backs.”

The pile of injuries the team suffered represents another convenient scape goat that a lesser staff may have latched onto. But the MUHS staff took the injuries as an opportunity for the younger players to take the lead.

“This is their opportunity. So, you always try to use that as something to build confidence in that next guy,” Mazurczak says. “You have an idea of what the next guy looks like that’s got to go in. And, sometimes it’s always not the next line on the sheet. Sometimes I’m going to move my corner to safety and then I’m going to bring in the next corner.

“And you have to be careful in how you present that to kids, because that can be somewhat demoralizing to that second safety. Who was the second safety, but is left questioning why they are still the second safety, when there’s still someone ahead of them on the depth chart and the number-one safety is hurt.”

The reoccurring thread with the way the MUHS staff conducted themselves boils down to this: clearly communicating reasons for the players to be confident in the face of adversity. Regardless of what misfortune they had endured, trusting each other would be the only way the 2019 MUHS football team would have a chance to leave their mark.

“I learned through my playing career how important it is for coaches to instill confidence in their players,” Mazurczak says. “It means a lot when you’re a player that your coach believes in you.”

In the fourth week of the season, the Hilltoppers were victorious.

Slowly but surely, the team started to stack success. Seven weeks later, the 8-3 Hilltoppers found themselves preparing for a quarterfinal playoff game yet again.

MUHS, refusing to be defined by their rough start, adds yet another chapter to their legacy, one that has not only produced good football players, but those who have gone on to great careers in business, the armed forces, as doctors and lawyers – even an F-16 fighter pilot.

But the most impressive aspect of the program isn’t the type of people the program produces, it’s the greater Marquette family it has helped to create over the years.

One such example is Mark Spellman, a Hilltopper center who went on to earn First Team All-Conference Honors at Illinois State. During the year, Spellman volunteered to come in and work with the MUHS center, who had been struggling through the first couple of games.

Another more well-known example is Oluwadare “Dare” Ogunbowale, who currently plays for the Tampa Bay Buccaneers. When the Bucs had their bye week in October, Dare could have gone anywhere and done anything with his free time.

He came back to Milwaukee to be on the sideline for the Hilltoppers final regular season game.

“We’re fortunate to have that type of loyalty, camaraderie and brotherhood,” Mazurczak says. “Our players really do feel like they’re coming back home. I think that’s a tribute to our coaching staff and how we mentor these guys.”

When the playoffs arrive, Mazurczak will dress the entire Sophomore class, as well as a handful of freshman. It’s not uncommon to see 130 to 150 young players, brimming with pride, lining the field on a chilly Wisconsin evening.

For all the accomplishments of Mazurczak’s career, nothing can steal his joy in seeing those young men who represent all that is good about high school football standing on the sideline united in one common goal.

“It’s a balancing act, because I’d love to bring all of our freshman to playoff games, but I don’t quite have the ability,” Mazurczak says. “The athletic director’s says, ‘Listen, we’re not going to send four buses to the game,’” he jokes.

The 2019 Hilltoppers didn’t have a fairy-tale ending. They fell in the quarterfinal round, losing to the eventual Division I runners up, the Bay Port Pirates from Green Bay.

In many ways the game was a microcosm of their entire season.  They fell behind early and all hope seemed lost.

But when faced with tough adversity, they did not quietly accept their fate. They fought back with everything they had.

This seemingly small footnote in a losing effort captures one of the greatest lessons that football can teach – no matter what comes your way, you have to keep fighting. If nothing else, the 2019 season certainly taught those young men this lesson.