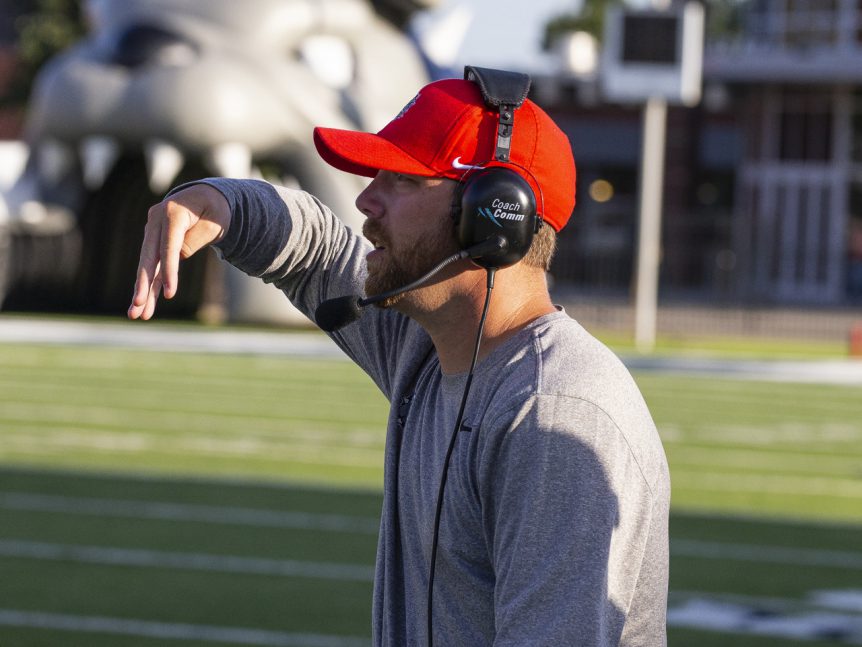 As a first-year Defensive Coordinator, I am excited to bring my experience of coaching within a 3-4 Defense to SWOSU and put it to work for new Head Coach, Chet Pobolish.  After working a year with Coach Pobolish at Missouri Western State University as Running Back Coach, we quickly realized that our philosophies were similar in how we saw our side of the ball playing.  I will detail these philosophies throughout this article which started with the concept of being a “jack-of-all-trades while master-of-none”. This meant sometimes giving up the more common theme of being very good at one specific play with coverage, blitz, etc. Rather we sought ways to get as many players on the field allowing us to be more versatile while providing our players increased opportunities of being successful in their assigned positions.  With these elements in place, we are encouraged with how our players responded during spring ball and are looking forward to a great summer. Preparation, Execution, Effort, and Toughness are the four pillars and the foundation of our 3-4 defense. In our first meeting, the players were introduced to how we define each of those four pillars. They understand that in order to execute a successful 3-4 defense everything we do on and off the field must reinforce those pillars.

Preparation is the first pillar and the most important in our philosophy. How we prepare ourselves for every aspect of the game is paramount.  While planning, practice, and preparation for each game is key; how we prepare off the field is what will prove crucial to our success. This includes the players’ accountability for academic responsibilities in the classroom and while consistent workouts build physical and mental strength, our players understand the integral importance of developing healthy sleep habits. If there is not effort, discipline, and focus channeled into each of these components, performing at the highest level will not be realized and cannot be sustained on the field. We teach our players that “It’s all about US.” #SpotTheBall is our motto and how we want our players and coaches to live.

Execution is the second pillar and is directly impacted by how we prepare.  If we commit at a high level in our preparation, execution will be reinforced allowing us to perform at the highest level possible. Players understand that sustaining a high level of execution is supported by monotony which includes: repetition of watching film, routine practices, and regular workouts.  As a team, we must recognize our negative attitudes and correct them; allowing us to execute at a higher level while preparing ourselves to execute no matter the situation.

Effort and Toughness are the final two pillars of our philosophy. Our team understands that we will not sacrifice either of these to be successful. We teach our players that effort in every aspect will define who we are. One way we do this is by asking the question, “How do you want to be defined?”  We emphasize running to the ball, finishing plays and giving everything they can to each play. Toughness is hard to gauge by numbers or stats but can easily be seen in how players practice, workout and overcome adversity.

The awesome thing about these four pillars is they are easily transferable to any side of the ball, any team or any situation.  We want our players to create an atmosphere to be successful. By basing our 3-4 defense on these four pillars we believe we are establishing the right path for them to follow.

Our defensive philosophy was developed with the overall aspect of the team in mind, keeping a broad philosophy for our team to make sure our rationale behind everything we pass along to the players is similar and not watered down.  Branching off of our philosophy we get very specific as we step towards our goals. The next ten items are what we will pursue and our reputation as we work towards a successful future for SWOSU Football.

As is evident, we stress the ability to get to the ball in many different ways.  Our main emphasis during these past spring practices was running to the ball and finishing the play no matter where we were on the field or what the outcome might be. Trusting that your other ten teammates will do their job is key!

This Spring was vital for us as a football team and defensive staff.  We were implementing a completely different defensive scheme from the previous years and wanted to make sure that everyone was on the same page while still pushing our players to increase their mental capacity along the way.  Our defensive staff decided that the best way to do this was to meet and install by using multiple modalities of learning.  We prepared daily by meeting with each position group in the following ways

As we progressed through spring we not only learned from our players but also from each other.  Meeting as a complete staff daily, we discussed different means of getting through to our players.  Obviously in terms of football but also in life discussions about who they were, where they came from and what their goals were after graduating.

Aside from the game, we as coaches and teachers are very lucky to impact the lives of so many individuals throughout our careers. Our staff wanted to make sure that our players understood this from day one–by being there for them, no matter the situation.  When personal obstacles arise, we treat our players as young men and not children.  We give them an opportunity to talk through these situations and guide them toward appropriate responses to whatever has occurred in their lives. In the end, as they move toward graduation, we want to instill in our players the values essential in building the strong character necessary to become young men of integrity, honorable husbands and great fathers who will benefit their community.

Although I did not mention the word communication in this section, it should be evident that instilling this into your players is the greatest step in communicating on the football field.  As coaches, we must model for our players’ effective communication on the field, so they can follow by example.

As referenced earlier it was critical that our players and coaches were on the same page. We created a system which would provide our players with the simplest and best possible means to be successful.  We began with our positions and names. Joker (S) –  Give LEFT or RIGHT call based on Strength

Mike – Relay the signal from the sideline

Sam – Echo personnel from the sideline

Joker (W) – Echo LEFT or RIGHT call based on Strength

Now that we are able to line up to any formation or personnel we give our players the ability to play fast.  This starts with them feeling comfortable enough to make strength, coverage and blitz calls by their own reads.  While we already discussed our different means of teaching our daily installs, these are the quickest ways to give our players this freedom.  By putting them in situations to initially be unsuccessful, quickly learning from mistakes and taking advantage of that new knowledge was key. By allowing our players to play in a fast pace manner, they learned from being coached off their mistakes, from the film the following day.

Once we are able to line up to any formation we can proceed to move and stunt our line in any direction based on strength calls.  We will almost always send a fourth player which can come from any of the linebacker positions.  We call the fourth player coming the “Hot” player, which dictates where the defensive line will be stunting.  When we bring five or more players we then say we are blitzing and can run a variety of coverages based on how many “Hot” linebackers we have coming.  The most important thing about these blitzes is that the players understand the principle behind where they are coming from and why.  By associating blitz names, we start with the overall family of the call and can then make adjustments to bring the blitz different ways based on formation, running back or strength calls.  This gives us the ability to have a multitude of blitzes that are essentially the same but look different because of how we bring them.

Playing a 3-4 defense at SWOSU will be a great advantage for us as it allows us to have quicker and more athletic players on the field, we can adjust to any formation and it simplifies our calls.  Leading to playing faster and fewer mental errors on the field.  Most importantly, our players believe in what we are doing and they play with a ton of confidence and energy.  If you are interested in finding out more about our defensive scheme, don’t hesitate to call our offices or send me an email.

Thank you and good luck to everyone this coming season!  #SpotTheBall

Colin McQuillan is in his second season as the Defensive Coordinator and Linebackers Coach at SWOSU after joining the staff of head coach Chet Pobolish in December 2017. In his first season in Weatherford, McQuillan guided a defense which had two individuals selected to play in postseason all-star games in senior defensive lineman Dejai Johnson and TJ Harris.