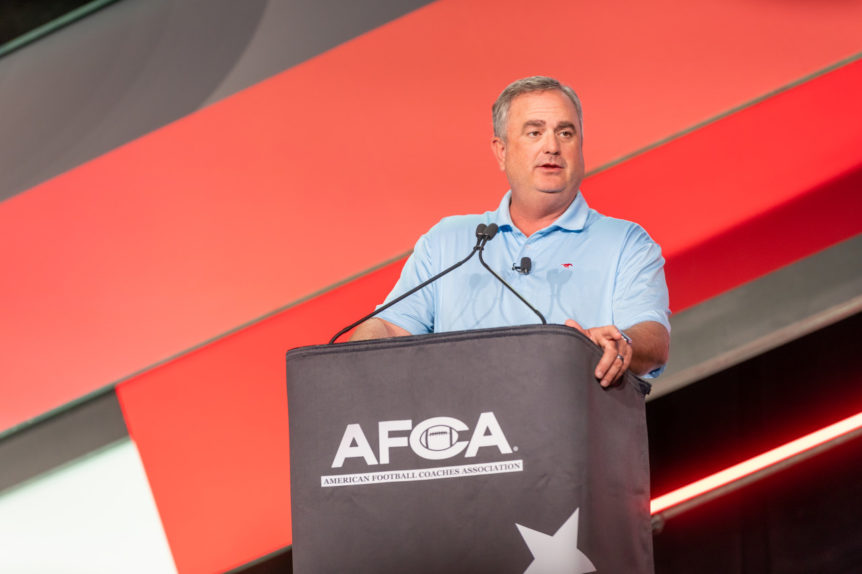 Becoming a head coach for the first time can be quite overwhelming to even the best of coaches. Thankfully, one of the things that makes this profession truly one of the best around is other coaches’ willingness to share what they know and their experiences. If there is one that will always be true about coaching, it’s that you can never be successful doing everything yourself. Coach Sonny Dykes buys into that philosophy and was kind enough to break down what he believes are the keys to being a successful head coach and running a successful football program. While he shared many great points, let’s highlight a few of the big ones.

To begin with, the hardest part for many aspiring coaches is getting into the profession with that first job. For Dykes, it was no different. However, his path into coaching football was certainly different. Dykes spent his college days on the diamond, not the gridiron, playing 4 years of college baseball at Texas Tech. When Dykes finished his playing career he decided he wanted to get into coaching, specifically high school football. Eventually, Dykes decided he wanted to get to the collegiate level and began applying to every division 1 college in the country. After a few years and countless applications that never turned into anything, Dykes landed a job at Navarro Junior College. This is where his career jumps off.

But when people ask Dykes how he broke into the profession. His answer? Be good at where you currently are.

After sharing the story of how he broke in, Dykes began breaking down the keys to success once you’re there. What do you need to do to maintain success? Dykes shared many of what he calls his “Keys to Success” but here are a few of the big ones.

Understand every job has its unique strengths and challenges

This idea can sometimes get lost in translation with many young coaches. Not every job is all sunshine and rainbows. While some schools may have seemingly unlimited budgets for football, that comes with its own set of challenges. Some schools don’t have world-class facilities on their campus, this can present its own unique set of challenging circumstances. Listen to Dykes explain the challenges his staff has faced at Louisiana Tech, Cal, and now SMU.

As Dykes explains it, sometimes as a head coach it is easy to become isolated. Dykes combats this by trying to get around his players as much as he can in a non-football environment. He will call guys randomly on his team to see how they’re doing. He will visit them in their dorm rooms or have groups of them over to his house. He wants them to feel comfortable in non-football environments tell him what the pulse of the team is and what his players have going on in their lives outside of football.

Leadership starts from the top and works its way down. If you as the head coach freak out when things go wrong so will the rest of your staff and, eventually, so will your players. As a coach, you need to practice what you preach. If you’re constantly telling your players to maintain a calm demeanor and to roll with the punches, you can’t freak out when things go wrong. Dykes shares a quote that has he got from working with Mike Leach at Texas Tech:

One of the most obvious points made all night was something that manages to get overlooked quite frequently. The complexities of modern offensive and defensive schemes allow for a myriad of different plays to be drawn up and implemented. Regardless, none of it matters if your players can’t execute it. Dykes talks about the idea that keeping things as simple as possible helps your players think less and play more. While Dykes was at Kentucky working under Hal Mumme and Mike Leach, they played Louisville and went into the game with an open field script of 7 plays. They ran through those 7 plays multiple times in a row. Why? Because the players had confidence in them and could execute the plays.

Unfortunately, there will never a “one size fits all” method to coaching. There are many complexities that come with being a head coach at any level and many hurdles that you will undoubtedly have to get over. But as Sonny Dykes said, focusing on the key to success can help you turn any football program into a winner. Dykes shared many more of his keys to success during his speech at the 2020 AFCA Convention in Nashville and you should absolutely watch the speech in its entirety. You can watch the full speech by logging into the new and improved AFCA Membership Library.