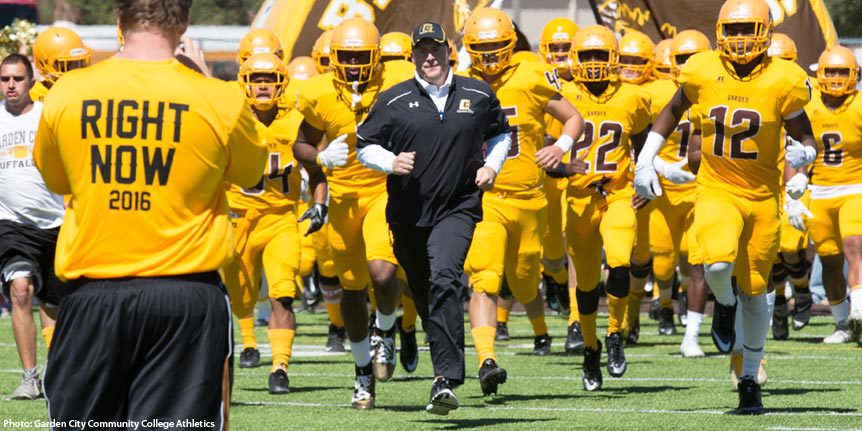 When Jeff  Sims was an assistant coach at Florida Atlantic University, he remembers the football program bringing in former Youngstown State and Ohio State coach Jim Tressel to address the coaching staff.

As the 2016 football season opened, Sims was staring down a roster comprised of 70 percent freshmen, which he says is the biggest difference between Division I and junior college. There simply isn’t the time for long-term projects or goals at the JuCo level. It’s why the 2016 season’s motto for the Broncbuster football team made so much sense: “Right Now.”

Needing to rely on such young players, Sims says he and his staff must be on target when identifying the three types of player they want to fill the Garden City roster.

1. “Try Hard.” Sims says last season’s freshman quarterback, Peyton Huslig, is a prime example. He had a 4.0 GPA in high school. He led his high school team to the state title game. He never got into any trouble and everyone described him as a hard worker, but he just didn’t show enough to get a Division I offer. Huslig opted to go the community college route to prove himself rather than Division II or III. It worked. After entering the program fifth on the quarterback depth chart, he made his way up the ladder and by Week 4 he had his shot on the field. He made it count and earned a scholarship to Missouri State for the 2017 season.

2. Academic Non-Qualifier. Sims describes these players as good enough to play at a major college but simply not academically prepared throughout high school to post the GPA and test scores needed to qualify. Sims’ goal for these players is for them to follow the structured, disciplined academic system in place at Garden City so they can earn at least a 2.5 GPA and 48 transferable credits during their two years on campus. “We tell guys, ‘You can be an All-American in our program but if you don’t have a 2.5 GPA, you won’t have the opportunity to transfer on.’”

3. “Bad Night.” Sims is quick to point out he doesn’t have any “bad people” in his program. He says everyone works too hard academically and athletically to allow a bad person to infiltrate the program. But, Sims sees opportunities for students who have had a bad night. “If you’re 20 years old, you’ve lived 7,300 days. If for 7,299 days, you’re a good dude, that one day still will hurt you because Google never forgets. But, if you make a mistake, you have an opportunity to come to our program and work really hard to show major colleges that you are a good person.”

If the focus seems to be on the individual, that’s by design. Sims bluntly reports, “We embrace the fact we are not their dream school. No one lies in bed at night and says, ‘I want to go and play for Garden City Community College.’” It’s a harsh reality for the coaches at the junior-college level but Sims says once you understand it, then you are better prepared to lead the players who compete there.

With that in mind, Sims says they follow a simple mantra for all players in the Garden City system: “Graduate, Scholarship, Championship.” It’s in that order for a reason.

Garden City gelled as a team during the 2016 season, posting 10 straight victories heading into the NJCAA championship against Arizona Western. The program’s perseverance was tested in the title game.

Sims says the “Right Now” motto showed up. With the defense facing a first-and-goal from the 3-yard line, the unit held tight. Stop. Stop. Stop. Now, on fourth-and-3, Arizona Western went for the win, rather than the field goal, to put the game out of reach.

The call was a naked bootleg and Garden City snuffed it out. Specifically, defensive coordinator Josh Hager and free safety B.J. Hager watched that play in a film session the night prior to the championship. Arizona Western had run the same thing in a game earlier in the season. They were prepared for the possibility of it and made yet another huge play when it counted.

“We really emphasize the ‘right now’ moment. So what if they’re 3 yards from the end zone? Right now, if we make a play, none of this matters. When you do that enough, in that type of game, then our guys really believe they are going to make a play,” Sims explains.

The defense — as it had all season — made the play. Then, the offense marched 86 yards in fewer than 90 seconds to score a touchdown and win the title, 25-22. Sims, who bills himself as an offensive coach who likes throwing the ball around, admits as a head coach, he knows which side of the ball controls your fate.

“What wins football games is defense. It’s easy to be a football team when the other team can’t score. Your offense plays loose. Your special teams get to go after fakes. If you’re a head coach, you should build your team around the defense,” says Sims, who says he made sure his first hire at Garden City a few years ago was a defensive coordinator and admits their recruiting leans toward defensive players … especially the ones who fit into their system and have the ability to contribute immediately.