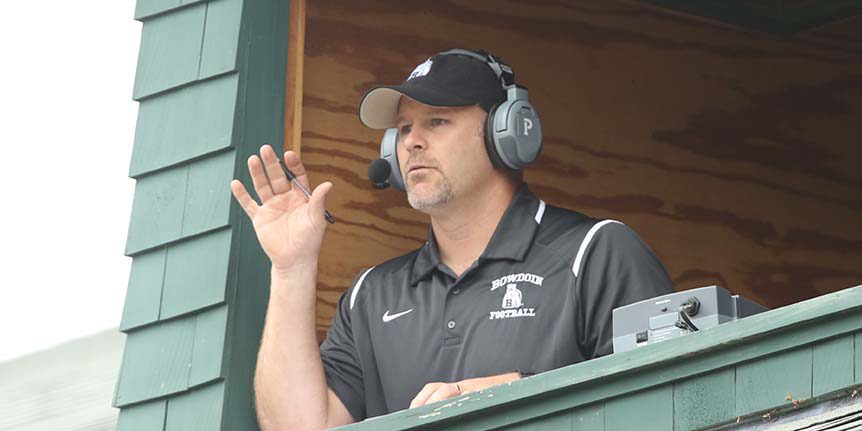 In this article, I will discuss how I break down our coverages by concepts. In the New England Small College Athletic Conference, we have a roster limit, so we have to be very meticulous about personnel. At Bowdoin College, our defensive staff’s job is to get the best 11 players on the field. Teaching coverages by concepts allows us to plug in the best available player. I will use our base coverage of Cover 3; it can be 3 deep 4 under or 3 deep 3 under (Diagram 1). We will show both a 2 high safety look and a 1 high safety look. I break it down into four concepts for the secondary. They need to know the following concepts: True Third Player, Closed Third Player, SCIF Player, and Post Player. We need to be able to cross train the secondary players to play in any of these four concepts. If our #2 corner is athletically better than our #2 safety, then he will play before the other guy. Description: When you have two detached wide receivers from the formation. It can be to both the field and boundary. Deep as Deepest True Zone/Quarterback Technique. Maintain Depth as long as quarterback or ball carrier is behind line of scrimmage. Don’t play any 3-step and quick game moves. Needs to be on top of all routes.

Run: Pass first player. Crack or Kick Replace. Fill where needed, pursue outside to inside. Description: When you have a single wide receiver to your side. It can be to the field or boundary. Pattern Read Deep technique. Deep as deep as receiver in your zone. Can be aggressive to 3-step routes, want to be in a position for a catch and tackle on the wide receiver.

Key: Ball action, Inside threat to #1. Hard Key single receiver or tight end to Nub side.

Run: Pass first. Crack or Kick Replace. Contain second, pursue outside to inside. Description: Underneath Zone technique responsible for second widest underneath route, landmark is #2 or Seam. Must carry vertical #2 or original #1 through the seam. Run with Wheel route of #2.

Key: Base Rules. Always be aware of split of #2 to determine drop.

Run: Force Player: Keep ball on the inside shoulder.

Run: Pass first. Alley. Pursue inside to outside.

This is a brief overview of what we teach within our secondary. Please feel free to contact me with any questions.

Rob Eggerling is currently the co-defensive coordinator/secondary coach at Bowdoin College. He joined the Polar Bears in the summer of 2016 after eight years at Saint Anselm, where he was most recently the associate head coach and defensive coordinator. His prior coaching experience includes a stint at Hartwick, where he was the team’s defensive coordinator in 2007, as well as UNH and St. Lawrence. Eggerling was a four-year letterwinner in football at Southern Connecticut State University where he earned his bachelor’s degree in exercise science in 2001. Eggerling graduated with his master’s degree from Saint Lawrence University in 2003.