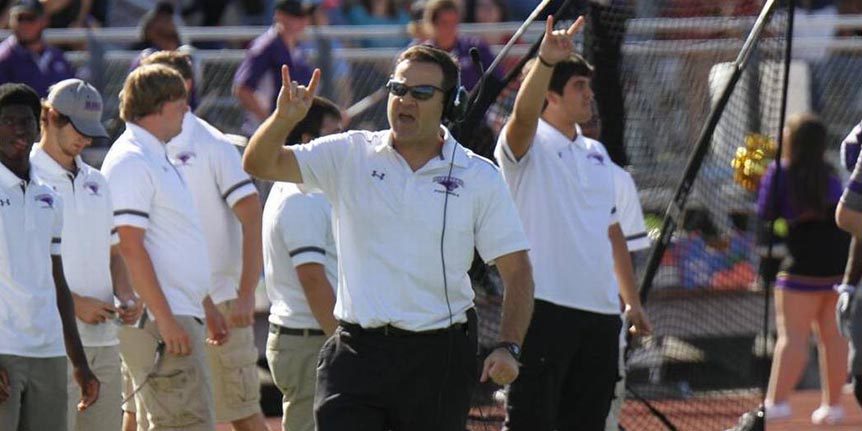 There are many variations of offenses today. Whether you are a spread team that snaps the ball every five seconds or a Wing-T offense that likes to snap the ball with one second on the clock, the object is simple: SCORE POINTS. Even though the object is to score points, teams cannot just grind the ball on the ground for 3 yards a play. If this is the case, the defense at some point will get a negative play or even a zero gain. This means you are punting more often than you would like to. At some point, you are going to have to get some chunk yardage. This is where the vertical passing game comes into play. Completing a ball down field does not have to be a lost art, it can be something that can easily be obtain.

There are many ways to throw the ball downfield – one-man routes, two-man routes, etc. All of them have their pluses and minuses. Pushing the ball down the field is necessary; it not only has a chance for a big play with a good chunk of yardage, but it also forces both safeties and corners to honor the deep ball. This also can force the defense to be a little deeper and help open up your run game and 3-step passing game as well.

One of my favorite vertical passing game threats is 4 Verticals. The reason I like this concept is that it gives the quarterback options, you can run it out of a variety of formations, and it is easy to teach. As you can see in the diagrams below it does not matter what the formation is, the landmark for the wide receivers (tight ends, running backs) are the same. Whether you are a wide receiver or a tight end, your landmarks are always going to be the same.

Receivers will best release around the corner and push vertical back on their line. Overall, their landmark is the bottom of the numbers. They will assume that it is a one on one route versus the corner. They will want to “Save The Box”. This means that if they chose to go outside the corner they must push back into the field (about 6 yards for the sideline). They must keep this box open so that the quarterback can put the ball outside in this area so the receiver can work away from the corner and catch it in the open area.

The landmark for inside receivers is +2 outside the college hash. If you were at the high school level the hash would do. If the coverage is going to be middle closed (Cover 3 or 1), expect the ball as soon as you clear the linebackers, and stay wide away from the free safety. If the coverage is open (Cover 2 or 4), you will bend it in slightly. You do not want to bend it hard because the defensive player that can take the ball away is the backside safety. Come slightly under the safety over the top of you and let the ball bring you in. Sometimes wide receivers have a hard time understanding the difference between middle open and middle closed. The easiest way is to see if there is a safety over the top of them as soon as they clear the backers. If there is (open), bend it. If not (closed), stay on your mark and expect the ball to push you away from the free safety.

RELATED ARTICLE: Adapting To Your Personnel In An Emergency Situation Running backs will be in the protection as it’s a 6-man protection. Teams will usually use a 6-man slide protection as to not have the quarterback throw hot, but I will leave that to your discretion. If the running back does not have his blitz keys, then he will work to about 2 to 3 yards over the center, then sit and wait for the ball. If he feels a defender come up and try to cover him (man-to-man), he will burst hard away from the defender and expect the ball from the quarterback. The nice thing for the quarterback is that he doesn’t care whether it is receivers, tight ends, or running backs who run the routes. It doesn’t matter to him because they will be in the same spot regardless of personnel.

The footwork of the quarterback while under center will be three big steps, a gather step, and a balance step (5 in total), and a short hitch up in the pocket. If the inside receivers come open early you might be able to throw it on your fifth step, but you have to have enough balance in your stance to be able to deliver a strike. If you are in the gun, you will take one step off of it (i.e. 4-and-Hitch). If I’m a right-handed quarterback, I’ll lead with a quarter step back with my left foot. Opposite for a left-handed quarterback.

As the quarterback is working his drop, he also needs to work his eyes. As he’s dropping back he will push his read one way or the other with his eyes. This can push a defender where you want him to go or, at worst, keep him where he is so as to not drift toward where you want to throw. The type of ball you want to throw for the inside receivers, or the outside receiver versus Cover 2, is a “Goal Post Throw”. Some people call it a 2-Ball, but it’s a shot right over the top of the linebackers in the hole before the safety has a chance to get there; it usually will not be farther than 25 yards downfield.

If you are playing the outside receiver and getting Cover 3, 1, 0, especially if getting press man and want to take a shot, you can take a 5-and-Hitch throw and lead him downfield outside his line. Picture a “Trash Can” 35 to 40 yards downfield about 4 yards from the sideline. You have to get enough height on the ball in order for the ball to go in. It’s your job as a quarterback to get it in the “Box”. It’s the wide receivers job to go get it. The quarterback reads his “North Star”. Usually it is his boundary safety and he will tell you the coverage. You are trying to push your deep free safety one way or the other, and play your 2 on one up the middle.

You need to anticipate the wide receivers coming up about 20 to 25 yards as soon as they clear the backers, and throw the ball before the safety can get there. The steps are still 5-and-Hitch. If you are already on your second hitch, you will find your check-down in front of you. You will never throw the ball late over the middle as that is when interceptions happen. If the guys don’t get open, hit your check-down and live for another day. (See Video 1.)

If it’s middle closed and you like your matchup on the outside (maybe it’s press-man, or you like the matchup with your wide receiver versus their corner), take it. The steps are still 5-and-Hitch, but you can give a little air under it in order to give the wide receiver time to get open. (See Video 2.) There are a bunch of different ways to run 4 Verticals. The nice thing is that for the quarterback the progression is still the same. Variations can keep the defense on their toes, but it also forces your players (wide receiver, tight ends, etc.) to learn a variation of the play. Diagrams 7 and 8 show two different ways you can run 4 verticals out of a 2×2 type formation. You can also tag players to “Cross” and take a different landmark. If linebackers and corners are used to seeing the same wide receivers work vertical, it is easy to get hands on, collision, and knock receivers off of their landmark. By crossing, this can force a defender to knock the wrong receiver and get off his landmark drop, which in turn can open up holes for a quarterback to throw. (Diagrams 11 and 12, and Video 4.) All offensive plays look great on paper. Just because the quarterback has options doesn’t mean the defense is going to sit idly by and let you throw deep against them. For instance, if a team decides it is going to play quarters against you, it’s hard to throw 4 Verticals. You can always throw comebacks on the outside if you play a quarters team to give the quarterback another option. Those routes can convert versus press or corner roll so as to still give you a 4-Vertical concept.

In Middle Closed, the corners start coming off their landmark of being on the number and are making the hole shots to the inside guys harder to hit. Defenses like to cheat some of their players a lot. Some defenses feel like you are not going to throw the field go. It’s a far throw and for the most part I’d agree with them, it is a far throw. However, you cannot just give up on it or else the defense won’t even cover the guy. Through film study and in game scouting, you can tell your quarterback to take a peek at Field #1 if the corner is cheating it a little too much. Other options are to keep him on either a comeback or a dig to give the quarterback another option if a team will cheat the corner.

Something will fail at some point. A wide receiver will trip and fall, a lineman will forget to block the correct down lineman, the defense had the perfect call called against you…things happen. Don’t panic; hit your check down and live for another day. Find out what is wrong, and have the compliment ready to go.

Four Vertical concepts are a great way to push the ball down the field, and yet keep it very simple for the quarterback. With most of our passing game, the acronym K.I.S.S. (Keep It Simple Stupid) always resonates with me. It’s not how much you as a coach know, but what your players can retain. The easier the concepts are, the faster the players can pick it up. Why do you think defenses line up the same way in their base defense 75 percent of the time? The 4-Vertical passing game can give your players confidence to throw downfield and make big plays. Making big plays breeds confidence in your players. This helps score points. Scoring points is the name of the game and can ultimately help you win.

In 2018, Mike Babcock begins his sixth season as the head coach of the McKendree University football program. Since taking the helm of the Bearcats’ program, Babcock as helped lead McKendree through its early steps as NCAA Division II members. Under Babcock’s leadership, the McKendree football program enjoyed a breakthrough season in 2015, turning in their first winning season in the program’s NCAA Division II era. The Bearcats’ success was noted by the voters in the AFCA Division II Top 25 Poll as the team earned its first-ever vote in early November. Babcock came to McKendree after spending five years as an assistant coach at Colorado State University-Pueblo, serving his last four years as the ThunderWolves’ quarterbacks coach and passing game coordinator. Babcock arrived at CSU-Pueblo after spending the 2007 season as the tight ends coach and director of football operations at the University of San Diego. Prior to that, he had stops at the University of Colorado (2005-06) and his alma mater, UCLA (2000-04).