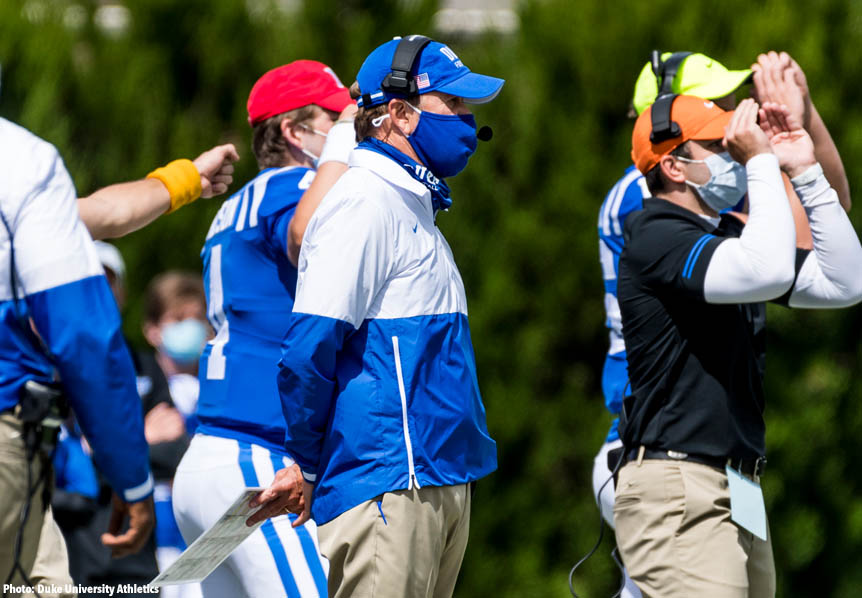 “I grew up in a football family; I grew up on a football bus,” says Hooper, who along with his brother Paul, is co- owner of Porta Phone. “My dad coached football all his life. That’s how we got into this business. We’ve tried to run this company like a football program. You treat your employees like family and they’re going to play hard for you.

“We built a brand here with Porta Phone, and we’ve done it by showing that we care about others and we do the right thing. Those are important values, and you can find them in our products, our service and the loyalty our customers have for us. It’s been that way for decades, and for good reason.”

Like many other suppliers around the country, Porta Phone has had to come to grips with a fragmented and disrupted football season. By the time this article comes out, maybe 8 of 10 FBS conferences will be playing. In all likelihood, no FCS, DII or DIII conferences will play in 2020, and spring 2021 remains questionable. Somewhere around 30 states will be playing high school football as you read this, and even within those states playing, not every school that normally plays will field a team.

The unprecedented reality forced upon us by COVID-19 has compelled suppliers to make adjustments internally and externally to remain in business through the duration of the pandemic. For Porta Phone, plant manager Aaron Cassidy proactively divided his company’s manufacturing lines into multiple, separated lines in different buildings. If by chance one of Porta Phone’s manufacturing lines gets hit with a COVID-19 illness, the factory won’t need to shut down. That’s working smarter instead of harder.

In true communications supplier fashion, Porta Phone also modified its phone system so employees could receive calls wherever they happen to be in the world. By deploying a cloud-based system, if one or more employees were required to quarantine for two weeks, internal communications won’t spiral out of control, and will instead remain seamless.

These simple, yet straightforward maneuvers spread potential risk and keeps Porta Phone’s eggs in multiple baskets, which is great for football coaches.

“Fortunately, COVID-19 hasn’t impacted our operation in any major way,” says Hooper. “You have to understand. Here, we have the same commitment to our employees that we have to our coaches. Forty years after I started here, that’s my big takeaway in terms of what I’ve learned from this pandemic. You just do the best you can, commit yourself to excellence and show other people you care. We try to live by those values here as espoused by Lou Holtz. During this tough time, those values have definitely helped us steer through all this uncertainty.

Porta Phone’s commitment to their product development also continues apace. As more and more football programs choose to utilize sideline communications gear during practice, as well as games, simplicity of use and portability has only grown in importance.

“Our equipment is so streamlined that it all fits in one box, and there’s no real setup time required,” says Hooper. “It’s extremely convenient for coaches to use in either game or practice situations. Programs across the country are using our equipment in practice because they can replicate game situations.”

Bose has been a major player in sound systems and communications for decades, however, their pedigree in this space stems in large part from the aviation and broadcast industries. As you might imagine, pilots sitting in the cockpit of an alarmingly loud aircraft value clear communication as much as any other factor contributing to the successful execution of a safe flight plan.

Bose is using its success in the NFL and other markets — including aviation — as a springboard into the college and even high school markets with its B40 headset, a variation on the B30.

“The B40 Soundcomm headset has been a product that’s really based on our aviation technologies,” says Ruwe. “Think about high-noise environments, think about aviation, and think about Division 1 FBS football coaches in their normal Saturday environment. Think about critical communication in aviation. You have to be able to hear air traffic control and they have to be able to hear you. It’s the same thing on a football sideline.”

The three fundamental aspects of the B40 are clarity of communication, active noise cancellation, and of course, comfort. These are foundational elements of the headset, and they are baked into the form and function. It also doesn’t hurt that the B40 is designed to work with any major belt pack currently in use.

Having only recently launched to the wider football coaching market, Bose is on the offensive during a time when suppliers throughout school sports are pulling back. Bose is taking real, proactive steps in an environment that has caused numerous suppliers – and football programs – to turtle up, hoping to just weather the storm.

“We didn’t know COVID was going to come when we started this, but I’m not so sure even if we did know, whether we would have changed our position in terms of launching the B40,” says Ruwe. “I’ll tell you why. You don’t typically see a coach — right before a game — try something extremely risky or completely revolutionary. They stick with their plan because they know it best. Similarly, Bose is not a company that takes huge risks.

Ruwe says it’s the same for coaches. If a coach knows that there are no playoffs this season, no conference or state championships, no season in the general sense of the word, then now is a great time to take a risk and add a new wrinkle.

“Now’s the time to take your chances, learn something new, expand your horizons and bring something fresh to your program that can ultimately help you achieve your goals down the road,” he says. “It’s hard to take that risk when you’ve got something good going, but this year, maybe it’s time to add some new value going forward.”

As vice president of sales for CoachComm, Mike Whitley hasn’t let COVID slow him down, though it’s certainly changed the game he knows so well. Because of social distancing requirements, sideline boxes have been expanded significantly. The same requirements have forced coaches — who maybe stood shoulder-to-shoulder at one time discussing aspects of a game — to stay far enough away from each other that shouting is not really an option for clear communication.

For much of the pandemic, Whitley’s been selling hard, extolling the virtues of CoachComm’s X System, which truly does boast a variety of features and benefits designed to make gameday a reality in the unreal era of COVID-19. The system makes it extremely easy to add more coaches to the network, stretches coaches’ ability to work farther apart from each other with no signal interference, and gives coaches the opportunity to establish “side channels” for easy peer-to-peer conversations that can occur off the main channels.

“This used to happen with guys yelling at each other 4 feet apart, talking outside their headsets,” says Whitley. “Now they have the ability to set up point-to-point communication with any coaches on staff and carve out their own private channels, outside the normal channels but still within the system. So from a COVID perspective, that has allowed coaches to not be dependent on actually speaking to each other face-to-face on the sidelines.”

This is critical because research has shown that the coronavirus spreads most easily within respiratory droplets expelled by people talking, yelling, singing, coughing, sneezing and more. Private channels keep a lid on those droplets — infected or not — while still maintaining clear communication.

Generally speaking, Whitley is a man adept at making cogent adjustments and adapting to challenging situations. Football is a market in constant flux. Coaches change jobs. Players move on to bigger and better things, within the game or without it. Parents change. People change. Maybe this year more than they have in a long time.

But good organizations are capable of evolving, whether you’re talking about football programs or suppliers to the school sports market.

“What I’ve learned in all this is about perspective,” says Whitely. “It’s been about perspective in life as a whole. Everyone thought sports and football and all these things were the most important things in life; they were everything to everybody. Then all of a sudden, you’re hit with a global pandemic, with the life and death issues that come with it, and it helps you take a step back and evaluate your entire life, your family, work, all of those things. And what you learn is this: Don’t panic. We learned that you have to stay positive, keep your people positive, help them understand that this too shall pass, make good decisions and keep your head up.

“The crazy thing is, it’s all of the things we learned in sports as a kid. You use those same principles, hard work, dedication, commitment, not giving up, find a way to work through adversity, come out the other side, be an optimist for other people, set the example, set the pace, encourage people. Those principles run the gamut in sports, and they run the gamut in life, and that’s why we’re all going to come through this thing, learn a lot from it and get better.”