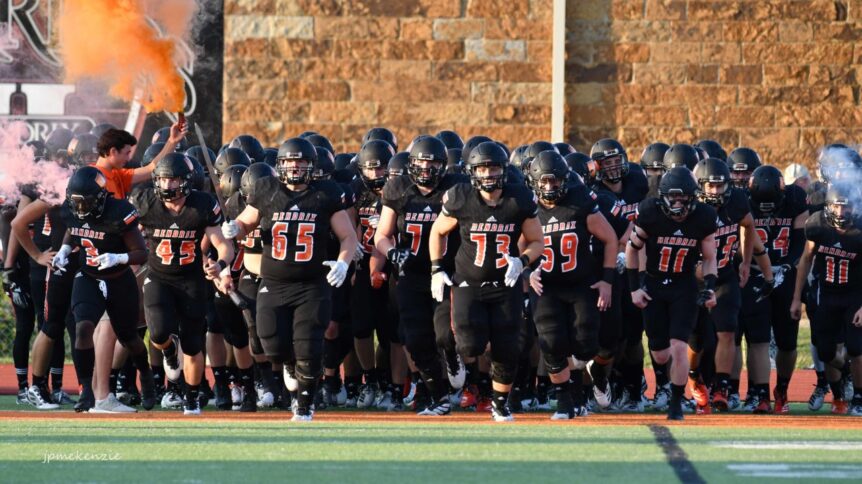 The most successful organizations have a roadmap for success that may contain themes, goals, and/or objectives. A common thread within those organizations is that their members are fully engaged in developing measurable outcomes. Of course, the overall measurable outcome that we, as football coaches, try to attain weekly is winning the game. This article will highlight our transition at Hendrix College from the traditional use of statistics to our current applied statistical model that led us to develop our keys to victory.

In the quest to build a successful program, we all develop and use measurable objectives. Statistics are inevitably used by most of us as a basis for measurable objectives. However, merely adding statistical data to a checklist or chart is not necessarily an effective strategy for overall team success. What it takes to win games is not necessarily a set number of yards, first downs, turnovers, etc. There is a difference between being a statistical champion and winning a championship, and our program has experienced both.

We have a short history at Hendrix College as we have only been playing for seven seasons. In 2013, we shocked people by being immediately competitive. During that inaugural season, most of our goals were more intrinsically motivated and not statistically driven. In 2014, we attained our first winning season, and we started to identify key statistics that would get us to be leaders within our league. In 2015, we won a conference title and represented our league in NCAA playoffs. That is when we started to identify statistics that would allow us to rank with the top teams in the country.

In 2016, we had the honor of being the top offense in the history of NCAA Division III, finishing the season with an average of exactly 600 yards per game, but unfortunately, we failed to win our conference championship. We were able to win eight games in 2017 and continued to have statistical success, but we were not necessarily growing or becoming better as a team. Then, in 2018, we suffered our worst year as we could not meet our weekly statistical expectations, and the benchmarks on our goal boards became a constant reminder of our failures. Those failures perpetually sowed seeds of self- doubt, and we finished with only two wins. Over those six seasons, we won the majority of our games and had statistical success, but we got to a point where we put more emphasis on actual statistics rather than using statistics to develop a plan to achieve team success.

I believed that we were in need of change at the end of our 2018 season. At a clinic years ago, I heard my former high school football coach, Marty Criswell, talk about shared team objectives from his days as head football coach at Bryan High School in Bryan, Texas. One of the main takeaways I got from his presentation was that if one side of the ball is statistically dominant while the other is not, then it can create a divide in the team. I thought that Coach Criswell’s concept provided a foundation to have success as a team. That idea had always stuck with me, and it ended up being the driving force behind developing a new way of using our statistical data.

I tasked our staff to analyze our six years of statistical data to create a set of measurable objectives before our 2019 season. I credit Thomas Eddlemon, our linebackers coach, and Jordan Neal, our former offensive coordinator and now McMurry University head football coach, for starting the deep dive into our statistical analysis even before we had decided to change our goal structure. The philosophical basis for our model also should be credited to Johnny Burnett, our former assistant head coach, who engrained us with the United States Military Academy’s keys to winning from his years of coaching with Jim Young at Army: Win the mental battle, win the turnover battle, win sudden change situations, win defining moments, win special teams, and win the fourth quarter. After crunching six seasons of data, we were able to combine both philosophy and statistical data to develop the following seven keys to victory. 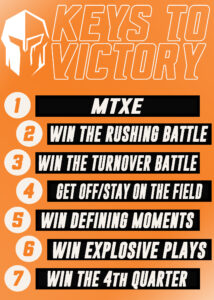 Here are the keys to victory with our evaluation criteria:

Having mental toughness and extreme effort are paramount for any football team. These qualities embody practical measures such as playing hard without loafing, being ready to play on the opening kickoff and drive, refraining from foolish penalties, and sticking together as a team.

Outrushing the opponent in total yards as well as yards per rush are essential for winning. The ground game is highly important and must be successfully developed so that opponents are unable to stop it.

This one is commonly touted as a deciding factor in the outcome of a game. It is crucial to remain in the positive with takeaways. Avoiding fumbles, interceptions, and turnovers on downs seems obvious, but is a vital component to winning.

4. Get Off/Stay Off the Field

Getting the defense off the field, and keeping them off the field is necessary for several reasons. Lowering the opponent’s third and fourth down conversion rate is crucial. By getting stops on third and fourth downs, not only are you helping your own team, but you also demoralize the opposing team. Forcing demoralizing drives ending in turnovers or punts help your team’s morale and physical exertion.

Defining moments are crucial must-haves throughout the game. For example, offensive scores after gaining turnovers, defensive stops after losing turnovers, effective two-minute situations, red zone conversions and special teams plays would all be considered defining moments. It is very important to be successful in these moments as the game could easily be determined by any of these situations.

Explosive plays can be defined as plays gaining more than eight yards. By winning the number of plays converted for a gain greater than eight yards, your team positions itself for success. Additionally, winning the average total yards per play sets up for a win nicely. Special teams are once again a topic of conversation as explosive plays can be gained offensively and prevented defensively. Handling snaps and holds, getting off of key blocks, starting with better field position, and making tackles in open space are all valuable ways to create success.

Doing things right and finishing the game with grit and determination is vital to secure a victory. The fourth quarter can make or break a team. Remain disciplined on all sides of the ball. Protect the ball, create explosive opportunities, convert late in the game, force turnovers, and score points. These sum up the other keys to victory but maintain focus on finishing well.

Our record over the last seven years is 41-30-0 (.577). The following table is a breakdown of our measured statistics for our keys to victory through those 71 opportunities. See Table 1. 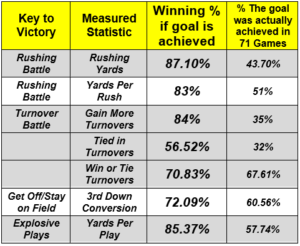 The table includes our winning percentages when we achieve the following keys: outrush the opponent, win the turnover differential, win third and fourth downs, and have more yards per play. The table also includes the percentage indicating we won those specific goals through the 71 games. This data is how we were able to justify our switch from our traditional statistical benchmarks to our applied statistical model.

Our keys to victory are much more fluid than traditional statistical goals, but they are still measurable objectives. The ability to share each of these goals within all three phases of the game allows everyone to have an impact on the team, and their relevance to the outcome makes everyone’s job actually matter. By abandoning traditional statistical benchmarks we are able to shift our focus to what is important to win the game we are preparing for and playing each week.

Failure is inevitable in any endeavor, but I believe that our keys to victory can allow us to fail forward. For example, if we were to have a traditional defensive goal of not allowing 100 yards rushing, and we give up a couple of big plays in the first quarter, then we would immediately lose that defensive goal. Subsequently, we would have to overcome that negative emotion for the rest of the game. However, with our current goal to outrush the opponent, our defense knows we can make the necessary adjustments. At the same time, our offensive knows that they will have to step up and control the line of scrimmage because we can still outrush the opponent for the duration of the game. The same example would apply to any of the other categories because we have created measurable objectives that allow everyone’s job to matter. This also reduces the propensity to transfer blame, which enables us to grow together and overcome failure.

I believe the most significant benefit we have achieved over the past year is that we are better together; we have lessened the divide between our offense and defense by prioritizing how we are going to win each game. Our shared goals have created a more positive culture within the team, especially on the sideline during games. This takes total buy-in from everyone in the organization, and our keys to victory are an integral part of as well as support our overall program philosophy. We have our keys to victory goal board in the locker room. We list and reiterate the same keys in our weekly scouting reports for all three phases of the game, and we organize practice around emphasizing our keys to victory. Our coaches and players have determined and agreed that our keys to victory model is one of the most critical components for our organization’s road map to success.

Buck Buchanan was hired as the Hendrix College head football coach in March of 2012. Buchanan, who is in his ninth year at the helm of the Warriors, is 41-30 as the head coach at Hendrix.

Prior to Hendrix, he helped restart the program at Louisiana College as an original staff member in 1999. As associate head coach, he guided Louisiana College to a top 25 ranking. He also coached a defense ranked nationally in tackles for loss, sacks, defensive pass efficiency and turnovers in his final season. Buchanan served as Louisiana College’s defensive coordinator in 2005, and from 2007-11 as he built one of the top-ranked defenses in NCAA Division III.