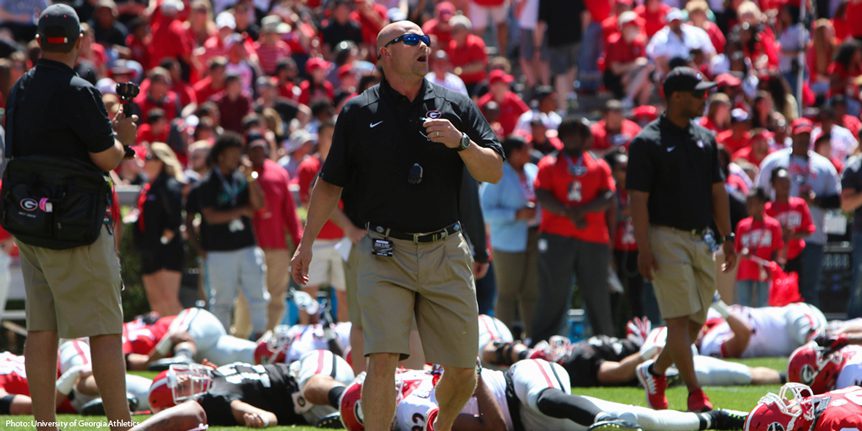 Coaches hear it all the time. The drills you’re running need to translate well to the field. The same is true of the weight room. That’s why Scott Sinclair, MSCC, director of strength and conditioning for the University of Georgia football program, believes in squatting heavy and squatting often.

“That movement happens in most sports,” says Sinclair. “Most sport coaches, they talk about how a guy’s gotta be able to bend. We don’t want a waist bender; we want a knee bender. To me, the squat mimics that athletic stance. You are moving weight to accelerate it, to decelerate it, to stop it, to hold it. In particular with football, you’re playing the sport on your feet, and you have to squat on your feet too.”

The squat is what Sinclair calls “a foundational movement.”

“I think it builds lower-body strength and core strength,” he says. “I think if you do it the right way, or you’re doing a bunch of reps, it can be cardio. It’s a movement that builds a lot of different things. It puts the body in angles that it may encounter on the field.

Sinclair has even labeled October as “Squatober.” The team squats on Sundays (setting the tone for the week), and during the season they also squat on Wednesdays. It’s even a part of “Throwdown Thursdays,” the day of the week that Sinclair competes with his student-athletes. Throwdown Thursdays and Squatober aren’t about Sinclair standing over players, barking instructions and being removed from the process. The only place he wants to be is in the trenches working with them. He’s not out recruiting. He’s not giving press conferences. Sinclair is the person behind the scenes ensuring all Bulldogs are ready to play every Saturday during the fall. It doesn’t matter if you are a veteran playmaker, a third-string lineman or a five-star recruit.

“The standard we have at Georgia is not changing just because you’re here,” says Sinclair. “For you to come in and compete, you have to meet that standard.”

That standard has been critical in elevating Georgia to national-championship expectations and building athletes who want to challenge each other, and a properly performed squat is central to that standard.

“I just believe that when these guys can squat good weight, and they feel comfortable doing it, I believe it helps protect our lower limbs and our hamstrings,” he says. “I think it’s a movement that gives our players confidence. We squat low at Georgia. We pride ourselves on getting a good parallel squat. We don’t want a high squat. Our players know, if they’re squatting 400 pounds or 500 pounds, then they sure as heck can handle a double team of two guys that weigh 550 pounds.”