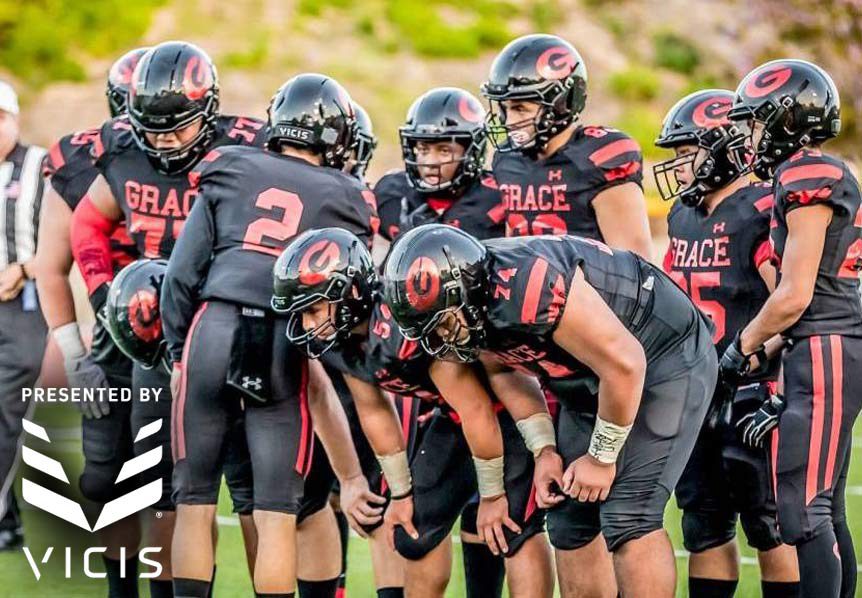 The No. 1 rule for football coaches at every level of the game doesn’t show up in your typical rulebook. Rather, it’s a rule that every coach believes more important than that.

The rule is, keep your players safe.

Whether they’re playing youth football on the local pee-wee fields or running out of their college tunnel on Saturday, players deserve the best equipment available.

Josh Henderson, head coach of Grace Brethren (Calif.) High School, knows his priorities when it comes to student- athlete safety, and when he finds equipment he likes, he goes all the way in.

For the 2018 season, the entire program at Grace Brethren switched to XTECH shoulder pads and VICIS helmets.

“When I saw the VICIS helmet, the way it was made, it was really revolutionary with the way it handled all different types of impacts,” says Henderson. “XTECH came in and showed us their testing compared to the slope of the other shoulder pads we had. We tried them out. The price tag was steep on those two items. But here’s the thing. Safety is a big deal, and it’s always easy to do the right thing when it comes to safety.”

For Henderson, seeing the appropriate testing is critical to new equipment selection.

“When you’re making equipment decisions like this, for us, we are a private school, so it’s not entirely my decision,” he says. “It has to go to the school board first.”

Having the ability to clearly and concisely explain how different products work and why they’re necessary for student-athlete safety is highly important to coaches, because those coaches often need to sell the concepts behind the equipment to the school board or other interested parties.

Henderson also researches who works for the product suppliers. Certainly, a good equipment salesperson or dealer can make any product sound great, but for Henderson, it’s important to see the right kinds of experience in everyone at the equipment supplier, from the CEO to product engineers to research and development and other areas. This is research he conducts on his own while deciding whether to purchase products program-wide.

“When companies have the right people with the right backgrounds and educations in the right positions, it makes it easier to trust their results,” says Henderson. “You’re getting the right expert at every level of the VICIS organization.

“In this day and age, as coaches, we do not make any medical decisions on the eld anymore here in California. We don’t want coaches in that position. When we can see the research from the equipment suppliers and understand it, it makes it easier to understand whether we want to put every young man in our program into that equipment.”

Understanding whether a certain piece of equipment actually leads to more wins is a tough correlation to make, but Henderson says that certain assumptions can be made.

“Certain equipment helps in terms of a player’s mindset,” says Henderson. “When they know that we’re investing
to benefit them and keep them safe, it helps their mindset when they play. It costs us a lot of time and money, not to mention all of the discussions we had. But I think the mindset that we’re always pushing, always growing, it’s something that permeates throughout a winning program.”

The second element is more practical. The new VICIS helmets expand a player’s vision horizontally. The shoulder pads are more protective. The number of injuries are reduced.

“So, not having kids out because of injuries, that’s a benefit to everybody,” says Henderson.