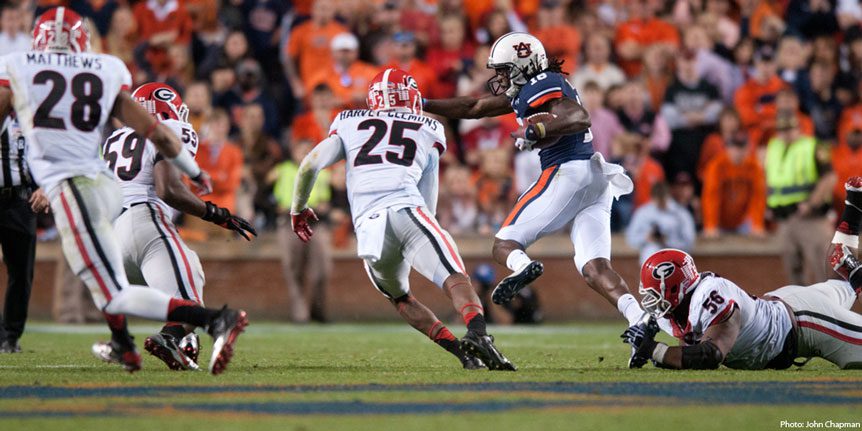 Each football player’s stance and first step are vital to the success of each play. Each player must be in a position to move and be highly efficient in his movements. Preventing false steps or wasted steps can make the difference in a play being a success or a failure. The running back must master several first steps or footwork. Successful footwork enables you to take the path that will ensure you get to the correct place.

The lead step is the most common first step for a running back. Use this step when the outside foot will go in the direction of the play. The 6-inch step’s angle depends on the play. It could be a toe pointed to a spot outside the tight end’s alignment on an outside zone or stretch play or pointed directly at the offensive guard on a direct run or isolation play. It might also be a step directly at an outside rusher when the running back is going to block a defensive end.

Use the open step when the outside foot and toe point directly to the sideline. Use this step on option plays, swing routes, and toss sweeps.

In the drop step, the outside foot drops 6 to 8 inches then goes forward toward the line of scrimmage. Use the drop step when you are running a direct run or isolation play behind the offensive guard.

Use the width step on inside zone plays when the quarterback is under the center. The outside foot gets width, then the inside foot crosses over. Again, the shoulders remain square to the line of scrimmage during this footwork.

Use the rhythm step to buy time when running the inside zone out of the shotgun. The 4-inch step with the inside foot gives the offensive line time to block its gaps while allowing you to slow and read the blocking in front of you.

This article was excerpted from Complete Running Back, by Tim Horton, a book that features 81 of the most effective drills for running backs. Whether you’re a power back who muscles the ball across the goal line or an ankle-breaking open-field specialist making defenders miss, you’ll improve your game with this book. Featuring 81 of the most effective drills, Complete Running Back is the ideal resource for players and coaches, it is published by Human Kinetics and can be ordered at www.HumanKinetics.com. Tim Horton is Running Backs Coach for Auburn University.