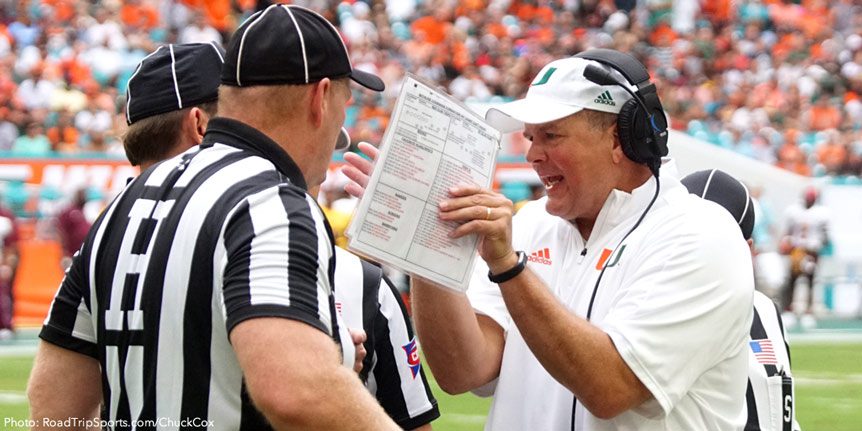 As the season draws near, it is time for the National Football Foundation (NFF) & College Hall of Fame to highlight the key rule changes that will take effect during the 2018 college football season.

Since 2011, the NFF has partnered with Rogers Redding, the national coordinator of College Football Officiating (CFO), to help generate awareness for the rule changes in college football through a series of regular columns distributed by the NFF. The CFO functions as the national professional organization for all football officials who work games at the collegiate level, and the organization held its annual winter meeting of conference coordinators for football officials in late January for the sixth consecutive year at the NFF headquarters in Irving, Texas.

Having officiated football for more than three decades, Redding started his career working high school football in Texas. He later officiated in the Southwest Conference from 1988-93, served as a referee in the Southeastern Conference for nearly a decade and worked three national championship games. He received his bachelor’s degree from Georgia Tech and later obtained a master’s and Ph.D. in physical chemistry from Vanderbilt. Redding was honored with the NFF’s Outstanding Football Official Award in 2010.

The NCAA football rules committee has completed its work on the rules for the 2018 season and has received approval from the Playing Rules Oversight Panel for a number of changes. Because this is an even-numbered year, the committee was able to consider changes for all aspects of the game. Under the guidelines for the two-year process, only player-safety rules may be changed in odd-numbered years.

Here are the 2018 rule changes as summarized by Rogers Redding:

The kickoff return continues to be the play with the highest risk of head injuries, and there have been a number of rule changes in recent years intended to provide incentives for a team not to return the kickoff. One such rule was made in 2013: after a touchback on the kickoff, the ball is brought out to the 25-yard line rather than the standard 20. In response, some kickers have perfected the art of the “pooch kick,” lofting the ball deep in the receiving team’s space in an attempt to pin them down with poor field position or effectively force a return.

To counter this trend, the committee this year created a new rule: if a kickoff receiver makes a fair catch inside his 20-yard line, his team will have the ball at the 25-yard line – just as if the ball had been caught and downed inside the end zone for a touchback. So for example, if a receiving team player makes a fair catch of a kickoff at his 5-yard or 10-yard line, his team will put the ball in play at the 25. The hope is that this change will encourage teams to take advantage of the better field position rather than return the kick.

Under the current rules, if the defense commits a personal foul or unsportsmanlike conduct during a field goal, the kicking team must either take points off the board and continue the drive with a first down, or decline the penalty and keep the three points. However, the penalty would not carry over to the kickoff after the successful field goal. Beginning in 2018, there is the option to keep the three points and enforce the penalty on the kickoff—just as with such a foul during a touchdown. The effect of this change is to make penalty enforcement the same on all scoring plays.

New Rule On Blocking Below The Waist

The rules about low blocks are sometimes a challenge because they are situational. That is, whether a particular block below the waist is legal depends not only on the block itself, but also on the situation. Without exception, blocking below the waist is always illegal during a kick play and after a change of possession, such as an interception return or the return of a recovered fumble. However, the identical block might be okay in a different situation.

This year, the rules committee took some steps to try to make the rule not only simpler but, much more importantly, safer. Setting aside changes of possession, here is the rule for the team that snaps the ball.

One final note: clipping (i.e., blocking below the waist from behind) is essentially always illegal. The rules we are discussing here are for low blocks from the front or the side.

Over the past several years, we have seen a trend in players’ pants getting shorter. This has a safety component as exposing the knees without padding means a risk of knee injuries and lacerations, and it is detrimental to the look of the game. In 2017, the rules committee declared that beginning this year, the legal uniform will include knee pads in the pants with the knee pads and pants completely covering the knees.

RELATED ARTICLE: 13 Keys To Success for the Graduate Assistant

Officials are mandated to enforce this rule strictly by not allowing players to be in the game with pants that do not completely cover the knees. Uncovered knees indicate illegal equipment: players must leave the game for at least one down, and they may not return until the equipment is legal.

New Rule On Pace Of Play

For many years, the rules have allowed the umpire to wear a small TV camera (no audio) on his or her cap. Based on experiments during one of the bowl games, this year the rule has been expanded to allow any official to wear such a “cap-cam,” subject to the approval of the two teams and the official’s conference.