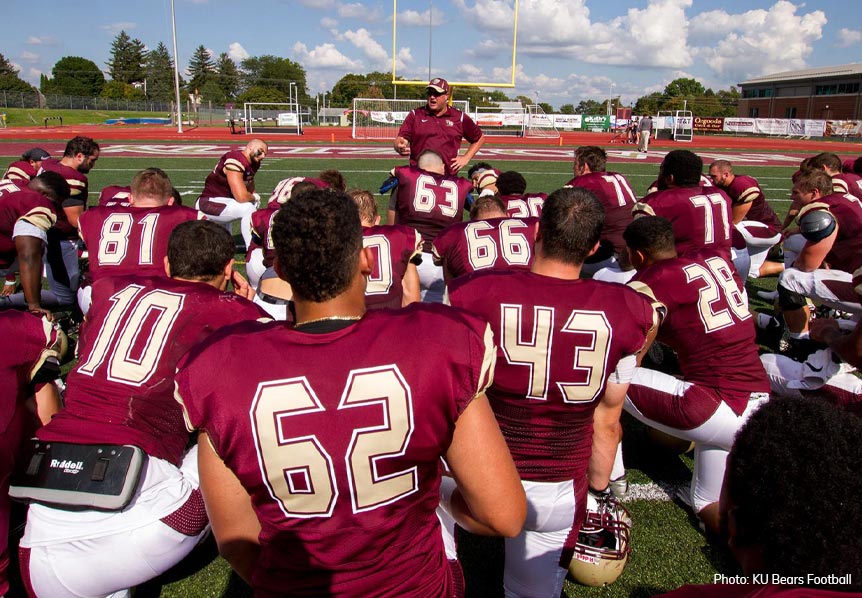 As receiver coaches, we still teach perimeter blocking fundamentals, but the Run-Pass Option (RPO) has created a new dynamic that we must drill. Like many programs, we have several types of RPOs. We have first-level RPOs that involve bubbles and now screens. These force quick, early blocking assignments on the perimeter. We have quarterback run-game RPOs that are married to quick-game routes. This type of RPO requires what we have come to label as the Transition Block.

The term transition indicates changing quickly from being a pass catching threat to now becoming an active open field perimeter blocker. Basketball coaches talk about transition defense, meaning the offensive team quickly adapting to defending, due to a change of possession. The offensive team becoming the defensive team is a similar concept to our receivers morphing from potential targets to active blockers.

As a coach, when you label things, it crystallizes the skill in the player’s mind. A transition block opportunity occurs when a receiver runs a predetermined route as part of a RPO scheme and does not get the ball. After he runs the route, the receiver is expected to quickly transition from eligible receiver to perimeter blocker. The speed with which this transition occurs is often the difference between a modest gain and an explosive play. The defense will always have at least one unblocked defender, so we cannot afford to be spectators during RPOs. 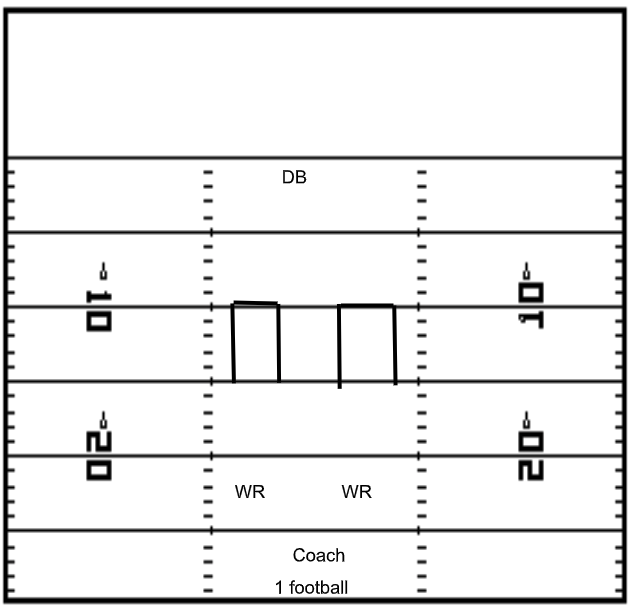 For the basic version of this drill, you will need two receiver chutes, a few footballs to avoid waiting, and a shield for the defender. If you do not have receiver chutes, traffic cones or pop-up bags could be substituted. Three players are working at one time during the Transition Drill. Two receivers line up 5 yards away from their own chute or cone. The receivers are also not standing right next to each other. They should be about 5 yards apart, split-wise. The coach or quarterback stands in the middle of the two receivers. The defensive back is deployed downfield about 10 yards from the chutes.

Check out the video to see the drill in action.

Both receivers’ take off at the same time running hitch routes through the chutes. The next part is very important. As the receivers get through the chutes, or past the pop-ups, they turn away from each other, planting and working downhill. The coach/quarterback will complete the ball to one of the receivers, thus triggering the other receiver into the Transition Block. (See Diagrams 2 and 3). 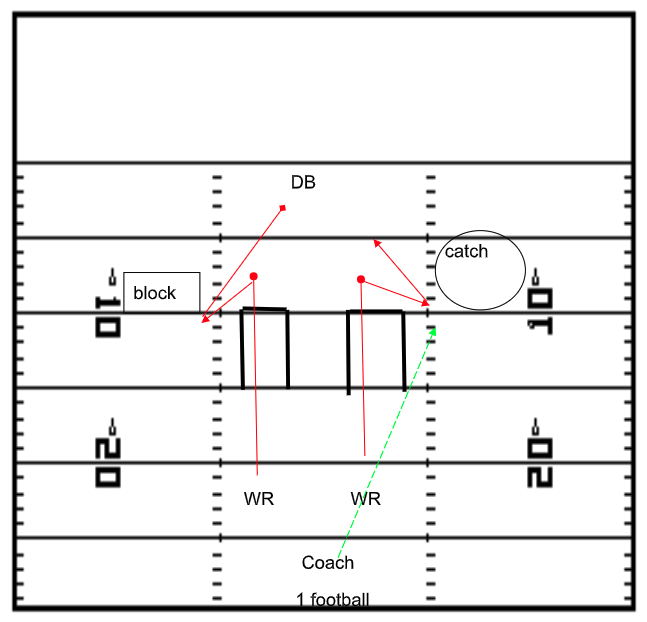 The blocker now hustles to find the defender and the ball carrier must read that block and score.

We usually try to set this drill up around the 20-yard line so the receiver must practice scoring. The blocker must engage the defender until the receiver has reached the end zone. For the logistics of the drill, we have the defender take three consecutive reps before switching a new defender in. Perhaps the best part of this drill is the amount of skill work that gets covered. Although our primary focus in this drill is teaching the Transition Block, we are also hitting footwork, ball drills, ball security, run after catch and reading downfield blocks. It is also a fast-paced drill that can accommodate a large group of skill players, including running-backs and tight-ends.

Although the Transition Drill was a byproduct of the RPO revolution, it has applications throughout any playbook. For programs that are big quick-game passing teams, these fundamental blocking skills have tremendous carryover. Coaches everywhere are always exhorting their players to “get a block,” yet you rarely see drills designed to target this situation. This drill will help enhance that skillset and will result in more explosive plays on all the calls on your sheet.

The Transition Block should be drilled just like any other specific type of perimeter block. We work it into our receiver drill rotation on a regular basis and feature it with our entire receiver corps. Do not assume that players will automatically know to quickly turn and get a block after the quarterback has kept the ball on your QB draw stick play. It must be emphasized. Do not assume that a receiver who was one of three or four receivers not targeted on Inside Zone or Dart Hitch RPO will realize that he must quickly find work to spring his teammate.

Like many other fundamentals of the game, Transition Blocks show up all over film study. Take the time to create film cut ups of both explosive plays that were created by Transition Blocks and chunk play opportunities that died on the vine because of a missed Transition Block. Protecting the ball, blocking the edge, and playing as a unit are the three key ingredients for our receivers. The Transition Drill has become an important staple that ensures those ingredients show up on game day.