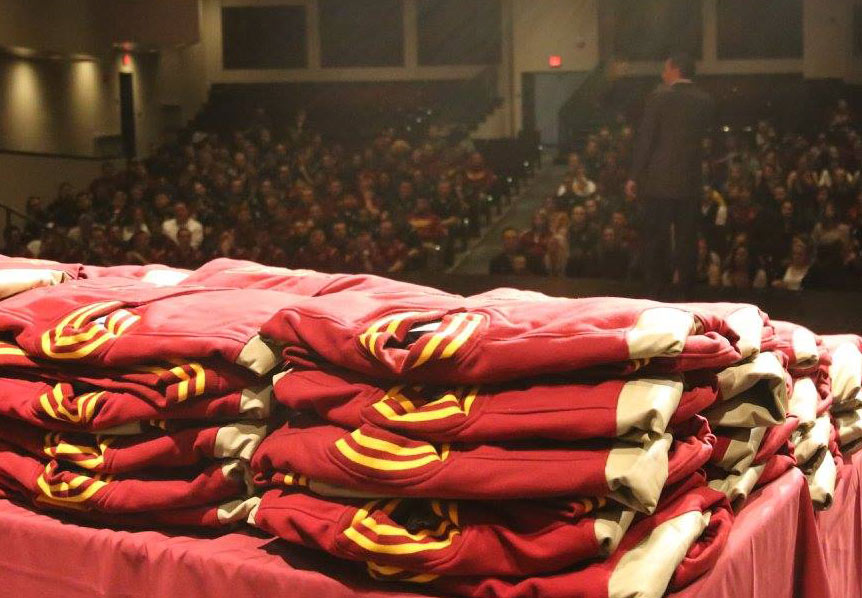 Early in his career, Chad Beeman worked at one of the biggest suppliers of championship and class rings in the world. Being that close to the industry, Beeman learned over time that there was significant waste in the processes behind creating these rings, but removing that waste in order to create a better system was not always an easily identifiable path.

One thing was certain though. These rings meant so very much to their recipients, and with good reason. Not only are there hundreds of secret techniques passed down through generations of skilled craftsmen and goldsmiths that make each ring a unique work of art, but each ring also carries with it meaning unique to the individual receiving the ring.

Beeman’s company, Signature Championship Rings, is in the business of celebrating the successes of its customers. The company’s stated goal is to help individuals and teams showcase and celebrate their accomplishments by creating their perfect custom ring.

Think about that for a second. Think about what it means. A championship ring, a plaque, an award of some sort, symbolizes the hard work, the early mornings, the late nights, the practices, push-ups and pain that each athlete struggled through. It symbolizes an entire season’s worth — and sometimes more than one season’s worth — of overcoming obstacles blocking them from their stated goal: a championship.

Any athlete who has been to that pinnacle knows, and that’s why these rings mean so very much. What may appear an unusually large and intense piece of jewelry to the uninitiated can often appear as the perfect symbol to the player who’s earned it.

“A championship is the culmination of years of hard work and sacrifice,” says Beeman. “Every one of our customers deserves to be celebrated. It’s such an honor to help each team build a completely custom and unique championship ring, one that’s personalized to only their special achievements and one that’s unlike any other ever crafted. This is what makes sports so amazing for us.”

The Ring Of Truth

When you think about what goes into a championship ring, it’s important to understand that the symbolism of it is built on a foundation of reality. The incredibly hard work and long hours it took to achieve such heights, to earn the symbol, is difficult to encapsulate in the symbol itself. That’s why, as coaches who seek to provide championship rings or to recognize individual efforts within their program, coaches must be intentional about telling the story, utilizing premium materials to build unique rings and provide athletes with an opportunity to provide input throughout the process.

The well-known company Jostens has been working with champions for decades. Their tried-and-true process begins by working with coaches to capture their story through the design of the ring itself. They know what it takes to ensure a memorable experience for players, coaches and families.

Chris Poitras is division vice president and chief operating officer for Jostens’ college, sports and specialty offerings. Jostens is responsible for the creation of the majority of all Super Bowl rings. Having worked with Super Bowl Champions to create their unique rings to celebrate their enormous accomplishments, Poitras knows how it makes a champion feel to earn this incredible memento.

“You can see the blood, the sweat, the tears that they go through,” says Poitras. Part of the sporting event in any championship is the athlete chasing the ring, he says.

“For us, it’s about becoming the storyteller of champions,” says Poitras. “How do we help that team tell the unique story of their entire season on a ring, using every nook, cranny and technique we can to capture that story?”

Down to the millimeter, rings are crafted to bring to life the story that it symbolizes, which is truly unique.

The Key To Family

For the vast majority of athletes and coaches, achieving a championship ring is just not in the cards. It only happens for a small margin of players and coaches, but that doesn’t mean programs can’t celebrate the family created by overcoming shared and individual adversity throughout the season.

The Iowa State letterwinners truly believe in the legacy created by achieving that specific accomplishment. It’s a prize worth seeking. Any time student-athletes wear the letter jacket, they are reminded of the sacrifice and tradition the letter represents.

Sage Rosenfels played football for Iowa State and was a clear standout at the quarterback position. Rosenfels went on to play over 10 years in the NFL for a variety of teams, but he looks back to his career at Iowa State, where he led the Cyclones to an 8-3 regular season mark and a bowl game in 2000. That season, Iowa State came away with wins against top-tier programs, including Iowa, Missouri, Kansas, Oklahoma State and Colorado. He was also named MVP for that year, and was a member of the Letterwinners Club.

“It really was a magical time in my life, and it’s something I look back on very fondly,” says Rosenfels. “I still talk with a lot of my teammates and old roommates about how great it was.”

Don Giddens is CEO of Maverick Awards, a manufacturer and supplier of athletic awards to colleges and universities in the country. From NAIA to NCAA Division I, Maverick works with hundreds of athletic departments across the country to recognize and honor the achievements of student-athletes. He has a unique perspective into what varsity letter jackets and other awards can mean to athletes who’ve worked so incredibly hard to earn them.

“Everyone loves to be recognized,” says Giddens. “I don’t care what level you played. When someone hands you a framed jersey or a jacket, and it has your name in the pocket or on the lining, they have such enormous meaning as those people go through life. The bottom line is that it really matters in a personal way.”

On top of that, schools find that these awards tie the player closer to the school, so as the player goes through life and develops into an adult who uses the values he learned and principles he earned on that football field, those letter jackets and four-year letterwinner rings become symbols of those values. Those athletes become parents who send their children to that university or donate time and money to that university’s causes.

“Many schools are trying to learn how to harness that relationship with former athletes as the develop and become working members of society,” he says. “The more you acknowledge the athletes who played for your institution, the more they’re going to talk about it and give back. It’s a great way to build those generational relationships.”

As time goes on, one would suppose that memories would fade, but the reality is that athletes who accomplish the feat of winning a championship at any level never forget it. And this extends to far more than just rings.

Championship rings, varsity letter jackets, framed awards and plaques, these are all symbols that help immortalize the accomplishments
of student athletes and they are incredibly important to not only that athlete but the athletes that come after them. Next time you walk through your own school, just take a look at the walls and trophy cases loaded with these physical representations of achievement in the years gone by.

One might think that as time slips away, so does the memory of these accomplishments, but it’s not true. Once a champion, always a champion. If anything, the memories become more streamlined and poignant, reflecting only what truly mattered to the individual or the team.

Becoming a champion is special. Celebrating the journey is absolutely necessary. Some folks will say a ring is a ring is a ring, but not in this case, and certainly not when it’s bursting with meaning and memories that will last a lifetime.