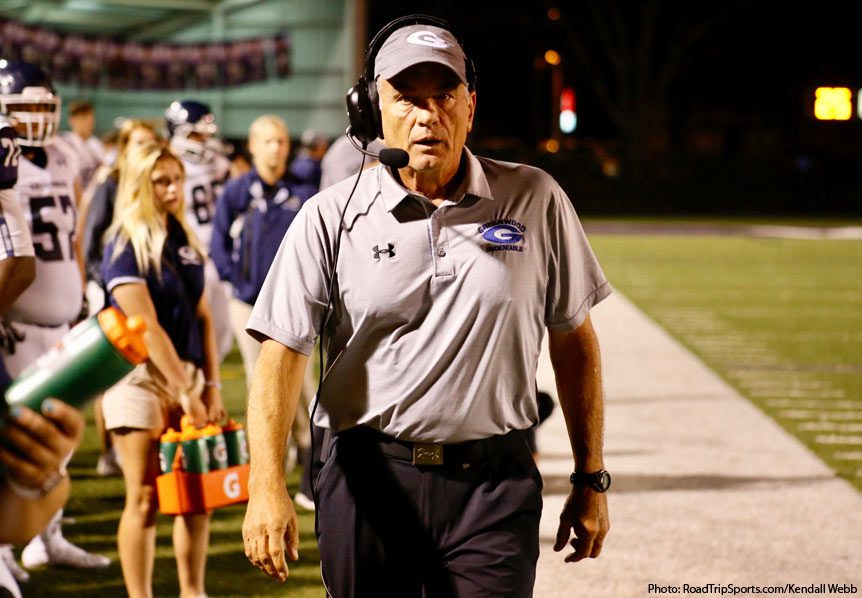 Greenwood (Ark.) High School head coach Rick Jones is the recipient of the prestigious 2018 AFCA Power of Influence Award, presented by TeamSnap. As he looks back on all the opportunities he’s had to make a difference, he encourages his peers to recognize the unique power they wield.

Under the guidance of Jones, Greenwood High School has been a consistent contender; they have been as impressive as any high school football program in the state of Arkansas over the last two decades.

Jones coached the Bulldogs to the state championship in just his second year as their head coach back in 2005, and has since won six more, including the 2017 Arkansas 6A Title, capping a perfect 13-0 season. But all of the stats, all of the wins and all of the championships are not what Jones focuses on.

Jones estimates he’s had the opportunity to influence around 1,700 players over a career spanning more than four decades. He hasn’t squandered the opportunities he has been given to make a difference in the lives of the young men who play for him, and his track record with helping players become successful off the eld, even more so than on it, is why he is the recipient of the 2018 AFCA Power Of Influence Award, presented by TeamSnap.

“It’s very, very humbling,” Jones says. “Coaches can win a lot of games, but when it’s all said and done, I’ve always thought we’ll be judged on how we actually have influenced people.”

To understand why Jones has been so dedicated to setting his players up for success over the years, one need only look at those who influenced him in his formative years. Of course, Jones’ very first coach, Hamer Prestidge, is pretty high on the list.
“He was probably 5 feet, 5 inches tall and 140 pounds. He owned a janitorial supply company in Duncan, Okla., and he was my peewee, Mighty Might football coach,” Jones recalls. “He was so full of passion and desire and motivation and enthusiasm. He would scream and yell at us one second, and he’d hug our necks in the next second.”

Prestidge was the first person outside of Jones’ family to challenge him to push his limits. He also demonstrated the love and compassion human beings should show one another, regardless of whether they have a reason to or not.

In addition to his first coach, Jones’ dad, like so many other coaches, was the very first reason he fell in love with the game of football. Jones’ father loved football so much, two of his three boys became coaches. While Rick has found great success at Greenwood, his brother David has been the head coach at Tivy High School in Kerrville, Texas, since 2012.

Fathers almost always have a profound impact on the lives of their sons, for better or worse. In Jones’ case, his dad was always a positive, loving influence. The impact he had on his family for the better is undeniable. In the late 1990s, the Jones brothers lost their father unexpectedly, but right up until the end, he continued to make his family a priority.

“Before he had a major heart attack, the last thing he did was go watch my brother’s team play at Allen, Texas. e week before, he’d been up in Broken Arrow, Okla., watching our team up there,” Jones remembers. “He alternated weekends. He’d go up to see us one weekend and go to see my brother’s team the other weekend. And, on the Saturday morning after the game, he had a massive heart attack and passed away 29 days later.”

As devastating as it was to lose his father, Jones recognizes how blessed he was to have him as a positive influence well into his adult life. Many of Jones’ players on the other hand, have not been so fortunate. In fact, right around the same time Jones lost his dad, other events transpired in his life that profoundly illustrate this sad reality.

After about three weeks of laying preparations for another great season of Greenwood football, Jones enjoyed a typical weekend at home with his family, unaware that the coming Monday would change his perspective on life forever.

One of Jones’ players who was new to the program, after battling through issues at home and frustrations with his girlfriend, took his own life. His mother, with limited options at her disposal, asked Jones if he would read the eulogy at her son’s funeral. Sitting in the second row of the church and taking in the surreal moment, Jones remembers being struck by the lack of positive male role models in the young man’s life.

“It really was a sad commentary on the fact that the boy didn’t have anybody else to give his eulogy other than a coach who had known him for three weeks,” Jones says.

Looking back on his conversation with the team on the previous Friday, Jones always wonders if there was something he could have said or done — something he should have noticed. In the end, Jones will never know if, had he done things differently, the young man’s life could have been salvaged. But the pain and suffering it caused has stuck with him to this day. It serves as a sobering reminder of the opportunity coaches have to change the course of their players’ lives.

“In our business, we deal with issues and when the players walk out the door, it’s on to the next issue,” Jones says. “To them, it could be some words or some thoughts that linger in their mind forever.

“I’ve gone through situations where I told kids, ‘Be smart. Don’t do stupid things this weekend.’ And I had a kid go 110 miles per hour and roll his car and hit a tree and was killed. You go through that for a while and it makes you understand the power of the everyday contact we have with kids, because you just never know in this life if it’s your last chance.”

Some coaches get more chances than others; that’s a fact. Jones has been blessed with a long career, and with it an innumerable number of chances to positively influence the lives of those around him.

Coaches understand how looking ahead or dwelling in the past can affect their win-loss record, but somehow it escapes them how it can also impact their players. Just because the team had a bad game, or may be facing a tough test, doesn’t relieve the football coach of his responsibility to be a role model.

But coaches also feel a responsibility to win. e pressure of chasing improvement or chasing a championship can take over even the most well-intentioned coaches if they aren’t wary of it. Jones says it’s something he has guarded against his whole career.

Jones encourages his peers to let the obsession with winning go if it means cutting corners or short-changing players. Taking his approach of being on a one-year deal can free a coach from the pressure to win. By putting winning first, coaches may find the success they are seeking on the field, and it may help them keep their job, but their players will suffer because of it.

Jones has won a lot of games. He knows how to build a program, and has coached a lot of champions. But none of these are his first priority. In today’s winning-crazed world, he knows these priorities could make him replaceable as a coach, but not as a role model. If he does get red, it’s no big deal. He’s on a one-year contract.

Jones and his staff work hard to instill character in their players, but he doesn’t believe that football teaches character — well, at least not by itself.

“Football doesn’t teach character,” Jones says. “There’s no way it does, but it is an awesome vehicle with which to teach character. But it has to be intentional. I’ve always taken the holistic approach to coaching football. The academic, the education, the social, the emotional — we try to check every box along that way.”

Jones’ statement may seem like he’s splitting hairs, but he feels it’s an important distinction. From his vantage point, far too many coaches are of the belief that just playing football will instill character in a player. At Greenwood, that’s simply not the case. The Bulldog coaching staff is constantly trying to teach players how to be better men, fathers, brothers and citizens — not just block and tackle.

Football forms the most unique high school classroom in this way. No other subject in high school has the ability to shape the whole person. When players learn math, they don’t use equations to teach history. In English class, they aren’t mastering arithmetic. But, in football, they are expected to learn far more than just X’s and O’s.

Not only does football provide the best classroom for affecting these big-picture changes in players lives, in many cases it provides the only classroom. For Jones, that’s simultaneously the single most inspiring and terrifying aspect of the coaching profession.

“We’re lucky at the junior high level, and especially at the high school level to have an opportunity to help kids at a very, very important time in their life,” Jones says. “Coaches have to realize that sometimes we’re the only hope. We’re the only hope they have.”