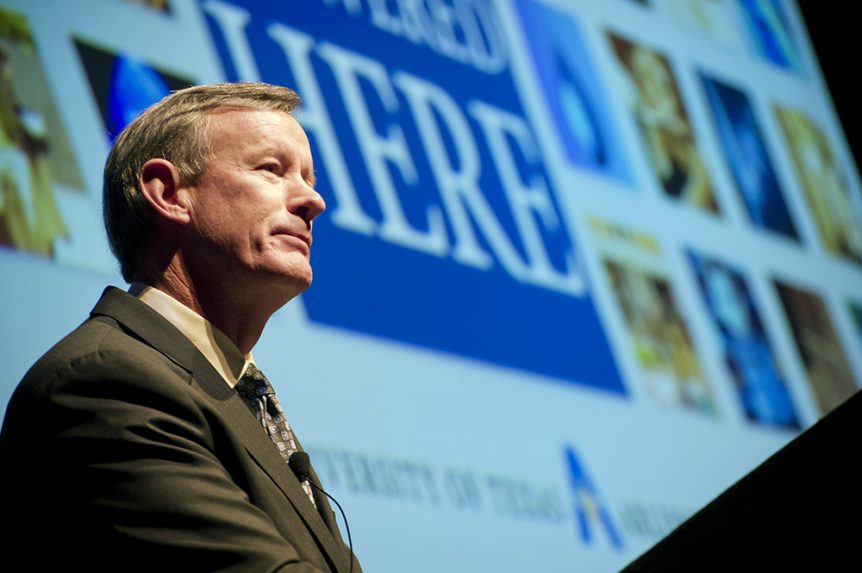 In the traditional sense, retired U.S. Navy Admiral William H. McRaven would not be classified as a “football guy.” Unlike a coach, he does not obsess over X’s and O’s or spend countless hours in a film room, but that does not minimize his connection with the game. Football and football coaches hold a special place for McRaven.

McRaven was the 2016 recipient of the Tuss McLaughry Award, which is given to a distinguished American (or Americans) for the highest distinction in service to others. During his acceptance speech, he delved into his reasoning for the importance of the game.

While the coaching profession can be glorious for some, it is far from easy. McRaven, who knows plenty about leadership, was quick to point out the responsibilities that one must bear when they accept the title of “coach.”

“Being a coach is likely the hardest and yet most rewarding profession in the world. It’s hard because everything you do, everything you say, how you act, how you respond to adversity—everything you do—has an effect on the young men you mentor. Consequently, you have to be at your best at all times.”

Although he only played football for two seasons in high school, his former high school coach played a significant role in giving him confidence. McRaven was attempting to break his high school’s record for the mile, and he had gotten close, but he only had one meet left.

“The night before the race, I received a call from a former football coach at Roosevelt High School – Coach Jerry Turnbow. I was stunned. I didn’t even know the coach knew who I was. I sat the bench for two years on the football team before deciding to go into track. The coach had departed Roosevelt 18 months earlier for another football coaching job across town. The coach called me, and he told me that he knew I was running my last race. He knew it was my last chance to break the school record. He told me I could do it. All I needed to do was to run my hardest and give it everything I had. The next evening, I broke the school record. No one cared but me, but breaking that record changed my life. It gave me the confidence that I could do anything I set my mind to. Four years later, I became a Navy SEAL. In the course of my 37 years, I’ve likely affected the lives of tens of thousands of men and women. I only had this opportunity because a football coach took the time to call me and give me a few words of encouragement.”

Consider that for a moment. Coach Turnbow’s seemingly small act—for a backup player at his former job— went on to indirectly affect the lives of tens of thousands of people through the course that he helped set in McRaven’s life. One phone call with exponential results that continue to grow each day, and that’s just the impact Turnbow had through one student-athlete.

In the course of my 37 years, I’ve likely affected the lives of tens of thousands of men and women. I only had this opportunity because a football coach took the time to call me and give me a few words of encouragement.

At the end of his speech, McRaven became emotional as he offered up one final image to push home the importance of football.

“The marvelous thing about being overseas in a combat zone is that the military goes to great lengths to provide a little touch of home. Consequently, every Saturday we would get almost all the games played. Most of the time, my SEALs or Army Rangers rarely got to watch an entire game, but we would take peeks at the TV in between preparing for a mission. I can remember countless times when it was the last two minutes and the game was on the line. The SEAL platoon would be jocked up, body armor on, night vision goggles on, guns in their hands, and the sounds of the helicopters in the background waiting for the guys to load up and go on a mission. They would all pause for just one more minute trying to catch the end of the game. If their team won, they walked out of the command center with a sense of confidence and pride that they had won. That somehow the mission would go better because their team was victorious. For some of those guys, it was the last thing they saw on TV. There is nothing quite like being 10,000 miles away from home and cheering on your football team to truly make you understand how important this game is.”

The game of football matters.