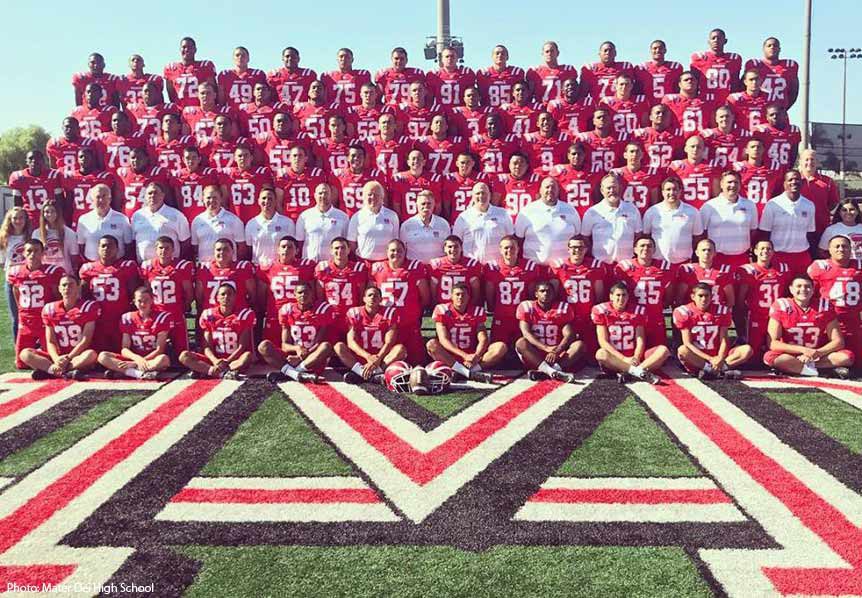 Leo Boese is a no-nonsense equipment manager. At Mater Dei (Calif.) High School, his job title is Athletic Manager/Inventory Control Manager, and his reach extends deep into the football program.

Year after year, Boese’s attention to detail keeps the program’s student-athletes not only looking sharp on the field, but also protected in the latest safety equipment. His rules on equipment usage are hard and fast, and he expects student-athletes to follow them.

Boese says working with freshmen student-athletes and their parents requires the most persistent education. Freshmen and their parents always have pre-conceived notions about what they’re going to wear on the field, and it’s Boese’s job to correct them.

“As freshmen, most of our players would tell you that they cannot stand me,” says Boese. “The kids and their parents are great, but they’re also the first ones who aren’t supportive when a kid brings in a pair of junior all-American shoulder pads.If anyone sees a kid out there with a pair of shoulder pads that aren’t ours, I need to know immediately. Or they say, ‘Hey, you don’t make it fun because you don’t let my kid pull his kneepads up.’ I say go play golf then. It’s like letting a kid play soccer without shin guards. You don’t do it.The rule is, you have knee pads on. ”

As players mature from year to year, they understand that Boese runs the show from an equipment perspective, and they need to respect that.

“As they become varsity players, I think most of them would tell you that they love me,” says Boese. “I’m relentless about education when they’re freshmen. I’m trying to teach them the right way to wear the equipment. By the time they get to varsity, they know Coach Boese is going to get them what they need. Don’t wear something he doesn’t approve, because if he finds it, he’ll rip it up.” Boese says that college and professional players are partly to blame for safety issues at the high school level, because players see the pros dressed improperly on the field with their knees uncovered, their shirts untucked, and so on.

“Once the high school kids see that, it’s tough to break it,” he says. “But I try to use examples. Shoulder pads are the same way. Players want them small, but then they don’t cover the shoulder properly. They also wear them loose instead of tightening them up. Even for varsity players, we’ll have to check shoulder pads right before the game. We say, ‘Hey, tighten those up. You’re going to get knocked out if you get hit and they’re loose.'”

Boese says that equipment managers have to be relentless and dogmatic when it comes to teaching student-athletes to wear equipment the right way. It comes down to repetition.

“If any equipment manager tells you he can tell his kids one time and it’s done, then they’re playing with some awfully responsible students,” he says. “At the beginning of the season, we run through our equipment litany. We spend about 20 minutes on uniforms. We spend a bunch of time on helmets and fitting. Then, five minutes later, you’re telling a player, ‘Son, I just told you about your helmet. It has to be strapped up right.’ I think it’s just a constant thing. You have to be consistent.”

Boese asks his coaches for very little help in the realm of equipment management, but he does ask them to back him up when it comes to equipment choices.

“That’s all we ask coaches to do. Just support what we’re doing here,” he says. “Our rule is, if you want to wear something that we didn’t provide, it has to be approved by me. Other than that, you wear what we give you. If it’s damaged in any way, shape or form as a result of competition or football practice, we replace it, no questions asked. It’s pretty simple.”