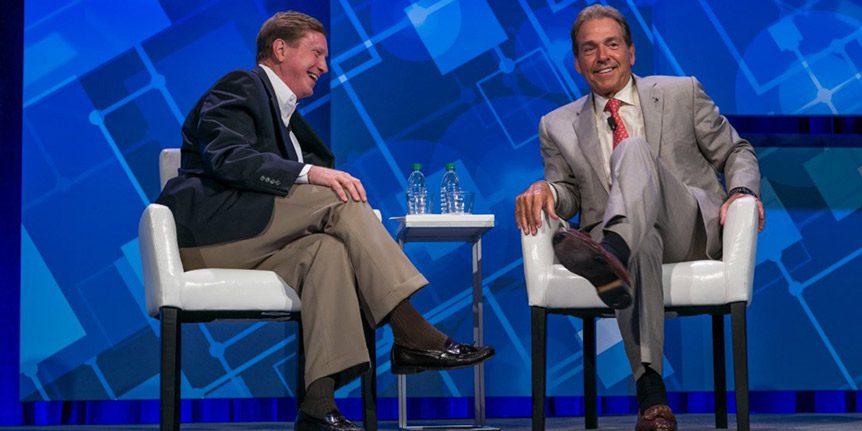 Since 2006, the American Football Coaches Foundation® (AFCF) has honored the chief executive officer of a major U.S. corporation with its CEO Coach of the Year® Award. In 2018, that award went to Tom Fanning, chairman, president and CEO of Southern Company, a leading gas and electric utility holding company located in the southern United States.

“Honestly, this is one of the greatest honors I’ve ever had,” says Fanning. “I have been a fan – believe it or not – of the AFCA for decades. My fondest memories are recalled from the decades I spent coaching youth sports. While the goal was to guide my teams to victory, the purpose was to teach the athletes principles such as teamwork, discipline and leadership to prepare them to become the type of citizens who make our communities a better place to live because they are there.”

Before Fanning rose to become chairman, president and CEO of one of the largest energy holding companies in the U.S., before he was responsible for everything from business strategy to finance to investor relations to risk management and more, before serving on the board of directors for Vulcan Materials and becoming a member of the Business Roundtable, Fanning was a football coach.

From 1975 to 2001, Fanning coached football in Atlanta for the Northside Youth Organization. Later, he worked for Riverwood (Ga.) High School as a volunteer assistant to the defensive coordinator, breaking down film for the high school team on his weekends.

“I’m a total geek about football,” says Fanning. “In fact, I used to order the publication of the papers at the convention for years. I’ve been a player, a fan and a coach. Number one, I am absolutely thrilled to be associated with the AFCA. Number two, I am beyond honored to be included in the same group as the past recipients. It’s quite a group to be associated with.” There’s a reason the CEO Coach of the Year Award winner and football coaches across America are similar. They’re all leaders of teams. Whether you’re coaching 100 student-athletes or 32,000 employees, many of the basic tenets remain the same. That structure and similarity are not lost on Fanning.

“So much of my personality from sports and coaching apply to business and leadership,” he says. “I had three rules with all of my teams. Do the right things. Do them to the best of your ability, and have fun. That’s the kind of execution I like to see at Southern Company.”

It goes beyond “the four corners of the assignment,” Fanning explains. It’s the “whats” and the “hows.”

The “whats” are the tasks employees perform every day to execute the fundamentals of a business.

The “hows” extend to the behaviors of the company in how everyone treats customers, fellow employees and the communities they serve.

“As an energy provider, we make, move and sell energy,” he says. “But it’s our interaction with each other. It’s our effort. It’s our extension of leadership into the community, making it better because we are there. It goes beyond an 8.5”x11” business summary of what our company is. It goes well beyond that.”

Fanning continued that a successful culture is an important factor for success in business and football alike.

“One of the things I think all successful coaches learn is that everyone’s different,” he says. “You really must figure out how to bring the best out of each individual, then blend that together to build the best team. That’s how we think about developing people here at Southern. When we think about leaders, we’re not thinking only about who the best leader is, but who is the best leader for which team and how do we build the right people around that team to perform best for our shareholders, our customers and our community.”

If there’s a single word that Fanning carries with him from his playing days – he was the quarterback and co-captain of his high school football team – it’s the word “resilience.”

“There’s nobody in life who hasn’t had a major setback, whether it’s your personal life or your professional life,” Fanning says. “One of the greatest things you can learn playing football is how to get knocked down, then get back up and put your heart and soul into the very next play. The way I translate that into the workplace is, essentially, there are days where you have these setbacks, and somehow, you must find the energy. Find the fire within yourself to make today better than yesterday, and tomorrow better than today.”