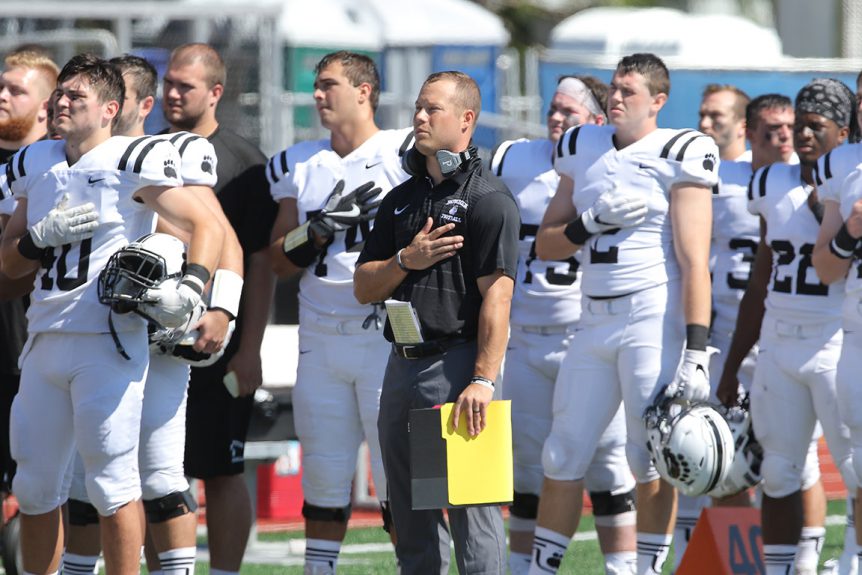 As a special teams coach, you have the ability to interact with almost all of the players on the team, instead of just one side of the ball. This allows you to build a connection in a different way with all the players. As competitors, we all want to feel like we are contributing to the success of the team. There will be more players contributing to special teams than offense and defense, and quite possibly this may be their only way to make an impact. Stress the importance of their responsibility. A player’s only role may be to jam a gunner on a punt return. However, that allows our returner to gain more yards, which helps out our field position, which benefits the offense and defense.

Special teams is often one area of practice that the players look forward to the least. I believe that as the coordinator for any special team you have to have a genuine enthusiasm for the individual drills and scheme which you are going to coach. If you are not excited about it, why would anyone else be? Players can always tell how you really feel about something, so approach it with the same passion you do a team period. Early on in camp, I will get involved with a specific station. As the players become more comfortable I will leave it to another coach so that I can be present in all the drills. Moving from station to station, giving a correction where it is needed, or more importantly, calling out a player when he takes a rep that is exactly what you are looking for builds a level of investment. This is not simply a period to grind them and make them tired, these fundamentals will make a difference in the game!

Our focus in the preseason, even before we introduce any scheme, is to establish the fundamentals that each special team’s player will need to make us successful. During the season more often than not individual periods for special teams are reduced or cut out, making it all the more important to develop good fundamentals in the preseason. We believe that repetition is the key to success, build the muscle memory up so that in the game it becomes as near to instinct as possible. Each practice during preseason we will have two 10 minute periods devoted to a special team. We will split up the position groups, minus the offensive line/defensive tackles/quarterbacks, into four even groups. A coach at each station will then execute the drill for roughly two minutes and fifteen seconds (giving time for them to rotate to the next station). Early in the preseason, we would allow time for each coach to explain the drill, but toward the end we expect the players to know and execute the drill with minimal need for instruction.

I chose to focus on Punt Return because I was responsible for running the look squad for the punt team at UNH. Like most schools the punt team was run by the head coach, so above all else, I wanted to make sure we were giving the best look possible. While I know there are many different ways to approach punt return, these are a few of the things that I believe helped us to be successful.

Every week going into a game we will set the goals that we hope to accomplish. We make sure that these goals are emphasized during the week, and that our scheme aligns with them.

Lastly here are five techniques that I believe are the core fundamentals to having a successful punt return team.

***Blocked punt that stays behind line of scrimmage either team can advance, we can attempt to scoop and score or fall on it (the ball will still be ours even if you miss, as long as they don’t pick it up and convert a first down.

***Blocked punt that goes beyond the line of scrimmage, instant poison call

We will also focus on two different kinds of hold up technique. Crush Technique is a more aggressive style designed to let the opponents blocking scheme work to your advantage. Mirror Technique allows your players the versatility to work against a scheme (typically shield) where the blocker might go two directions.

The last technique that we coach is protecting the returner. As a visual, we relate it to basketball, where everyone is working to “protect the rim”.

In conclusion, I would like to thank the AFCA for allowing me to contribute to the Summer Manual and hope that this material will help you in some way.

Kyle McAllister arrived at Bowdoin in the summer of 2018 after a stint as recruiting coordinator, special teams coordinator and defensive line coach at Tufts University. He will assume coaching duties of the cornerbacks for the Polar Bears this season. He began his coaching career at Georgetown in 2010 and was the defensive backs coach and recruiting coordinator at St. Lawrence from 2010-12. Prior to joining Tufts, he was the defensive ends coach and punt return coordinator at the University of New Hampshire beginning in 2012.