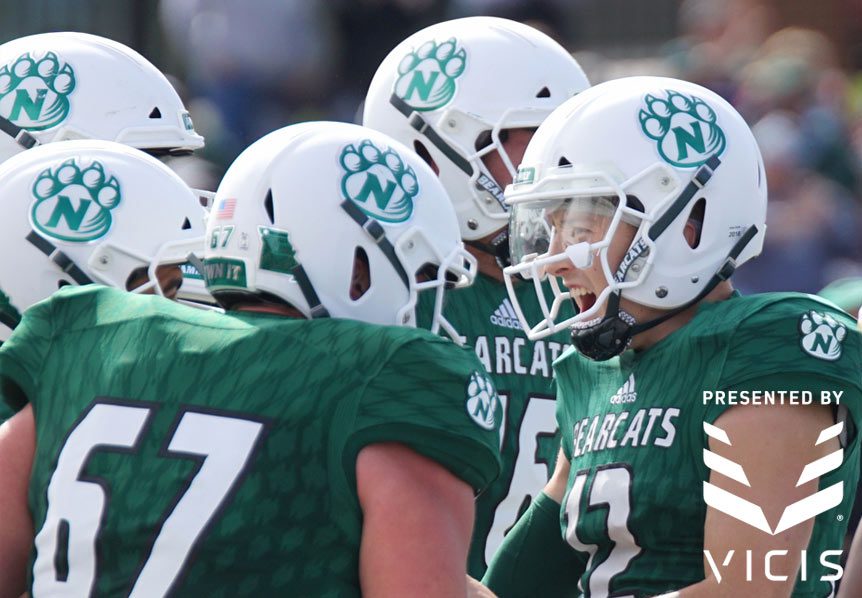 It’s fairly normal practice for cities and towns across America to brand themselves “Title Town,” particularly when one of their local athletic programs competes for and wins the championship game.

The city of Maryville, Mo., has earned this distinction. Its tradition of winning championships runs as wide and deep as the Missouri River, which cuts through the landscape just an hour west of town down Highway 46.

During a one-year period in 2016, the combined record of the football teams in the city of Maryville — from seventh grade through college — was 60-0.

Based on these results alone, the label “Title Town” is richly deserved by the community of almost 12,000. One of those community members is Tucker Peve.

He holds several outstanding titles, himself.

Peve’s commitment to excellence has helped the Kansas City Chiefs and Northwest Missouri State Bearcats achieve their high levels of success. His responsibilities include handling day-to-day equipment operations for the Bearcats. He coordinates, issues and maintains the student-athlete equipment. In addition to working closely with vendors, Peve also helps assist with practice prep, equipment transport, locker room organization and ordering.

“I knew out of high school that I wanted to get into equipment,” says Peve. “I could have played college football somewhere. I’m a big guy, but I was injured senior year in high school, so I looked into coaching and other ways to stay close to the game. I still wanted to be part of the game. I truly believe that equipment’s the closest you can be to the game without really playing. You still have the bonds with the players and the coaches. You’re still part of the family, and at Northwest Missouri State, we preach family.”

Part of protecting your family as an equipment manager is finding the best equipment and the latest technology. Peve spends a significant time each year with the Kansas City Chiefs and works full time with the Bearcats. It gives him access to some of the best football equipment available.

“I’m around new technology all the time,” he says. “The helmet technology, the shoulder pad technology, the cleats. We are 3D-scanning feet for cleats now. Anything we can do for elite athletes to make the game safer is my priority as an equipment manager.”

Peve’s boss and mentor, Allen Wright, is the long-time equipment director for the Kansas City Chiefs. He’s worked for the Chiefs organization for 35 years, and he’s helped Peve learn his craft.

“Allen’s a great guy; I’ve known him since I was a little kid, actually,” says Peve. “Allen’s been a mentor to me in the equipment industry.”

After learning about the helmet initially in Kansas City, Peve brought the helmet up to Maryville to show it to Northwest Missouri State head coach Rich Wright. Former Chiefs quarterback Alex Smith had been demonstrating the helmet for the team and it piqued Rich’s interest.

“It was intriguing because it was different,” Wright explains in a video the team made about their decision to invest in VICIS helmet technology.

“So, I put it on and immediately noticed how it opened up my peripheral vision. As a player, that’s important. Then Tucker said, ‘Now, let me talk to you about the safety features, because they’re about to revolutionize helmets.’”

Peve had done his homework. Sure, a recommendation from Allen Wright goes a long way with Peve, but as a consummate professional in athletic equipment management, he knows that it’s incumbent upon him to conduct his own research and find out whether it makes sense in his current situation and his current program.

“I wanted to show him that technology in football helmets is changing, and at Northwest, we pride ourselves on being cutting edge,” says Peve. “The VICIS ZERO1 is the No. 1-rated helmet with the NFL and NFLPA, and after we saw the data from both studies, it was pretty evident that we needed to purchase some of these helmets and give the players an option if they wanted to wear one.”

In addition to the helmet rankings, Peve also liked that the VICIS ZERO1 is the first softshell helmet on the market.

“Think of a helmet as a car bumper,” he says. “As many forces as you can absorb before they reach the body is your first priority. Depending on the location of the impact or a hit to ground, for example, the VICIS ZERO1 reduced forces better than any other helmet on the market at that time. Anything we can do to give our players that competitive advantage while keeping them as safe as possible, we want to do that.”

Investing In The Future

As any football coach knows, the latest in equipment technology — regardless of equipment choice — typically comes with a hefty price tag compared to equipment of the past. But that investment often pays long-term dividends. While Rich Wright feels that perhaps the game is under attack from certain quarters, he and many others agree that the value inherent in the game, and the lessons it teaches, last a lifetime for many of its participants.

Investing in the VICIS ZERO1 helmet made all the sense in the world to him.

“As a college football coach, I feel like I’ve got a responsibility to put the health and well-being of my players at a premium,” says Rich Wright.

To make the money work, the Bearcats reevaluated their need to have multiple helmets for each player, the only difference being helmet color.

“You kind of pride yourself on the swag factor in college football,” says Peve. “For recruiting, the guys love having the multiple helmets. However, when we made this investment with the more expensive helmets across the board, it didn’t make sense to have two colors. If we wanted to have the most kids protected on the field, why would we have half of our total investment on the shelf one week to the next. So, we got rid of our traditional green helmet and went to just white. The reason we chose white was because it gives you a blank canvas to build your brand on.”

By creatively looking at how to present those helmets week to week with different decals, the single white helmet provided the Bearcats with the best option to meet both safety and branding goals.

And, as any true Title Town professional would do, Peve decided to “pay it forward” to his local community.

Matt Webb is the head coach at Maryville High School. He caught wind of the Bearcats doing their deal with VICIS and he wanted to learn more. So Peve helped him learn about the technology behind the helmets.

“He wants the best for his players too,” says Peve. “I feel like — as a coach, an equipment manager or even a parent — you have the moral obligation to give the kids the best possible equipment. When he caught wind of it, several of his players wanted to purchase the helmets mid-season. Two of his athletes bought them last season, and I believe the response among his squad was positive.

In fact, Maryville High School announced in February that it wold equip its entire football roster with the VICIS ZERO1 helmet for the 2019 football season.

“So if you think about it, it’s the whole community of Maryville that’s wearing them now. It gives the kids a big option when it comes to safety, and it shows Maryville is progressive in stepping up to the plate when it comes to player safety. I would go out there and say, there’s not another city in America where basically most players from seventh grade through college are wearing the NFL’s No. 1-rated helmet.”

Sounds like it’s time for another 60-0 run for the folks in Title Town.