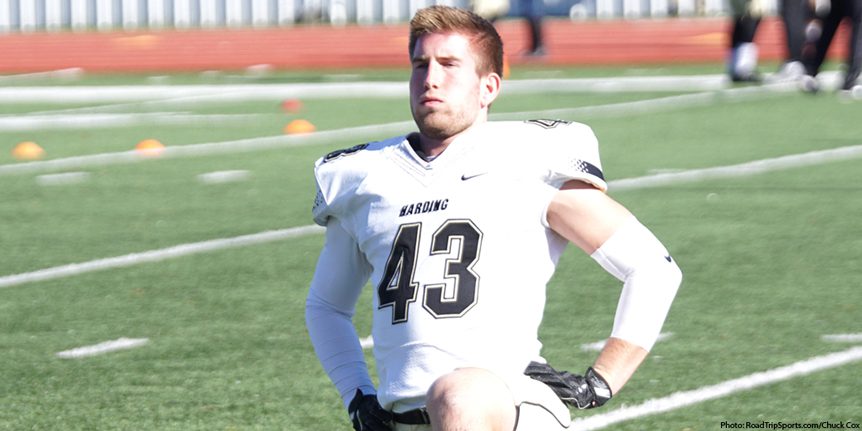 Lee Munn grew up in East Texas in a small town called Omaha, population 999. He played great football for the Pewitt High School Brahmas (2A Division II). Nutrition wasn’t always focused on during his playing days as much as it is today.

But as high school graduation approached, no NCAA Division I colleges or universities were making him offers to play, so he planned on attending Baylor University. Then, he received a phone call from a coach at the University of Mary Hardin-Baylor (UMHB), a fairly new Division III program at the time.

He visited the university in central Texas, and immediately fell in love with it. He played four years, the first year on JV and the following three years on varsity.

In his sophomore and junior year, UMHB played in the national championship semifinals.

Among highly talented high school football athletes, Munn’s story is not uncommon. It is far more likely that a high school senior will finish his final season of play and enter the ranks of Division II, Division III, NAIA or Junior College football, than it will be for that same senior to play on a Division I FBS or FCS team.

Today, Munn is defensive coordinator for Southlake Carroll (Texas) High School. Earlier in his career, he also served as strength and conditioning coach for UMHB. He is CSCS certified with the National Strength and Conditioning Association (NSCA).

Munn says even though many high school seniors go on to play different levels of football after their senior season, they will face a multitude of challenges between that final autumn whistle and the start of summer camp. He says paying attention to nutrition during high school and developing proper habits is critical to success at the higher levels of the game.

Though a focus on speed and explosiveness is highly valuable when preparing for a step up to the next level, high school seniors may as well forget about it unless they are eating right.

Lifting right is only one side of the coin. Nutrition is the other.

“Coming out of high school, I was so naïve,” says Munn. “The biggest key is fast food. Athletes need to limit fast food to one cheat meal per week at the most. I see young guys come in here all the time at 17, 18 and 19 years old, and their bodies are getting away with eating all that fast food right now, but eventually, it will wear on them.”

He also sees younger athletes eating more processed food than they should. He says athletes should eat food that is as close to its natural form as possible.

“They have to realize that if it comes in a can or a box, and has a long shelf life, they probably don’t need to be eating it,” says Munn. “If they’re eating stuff that is close to its original form, they are going to be on the right track.”

Following workouts, Munn says it’s important to eat quick, simple carbohydrates in order to replenish glycogen stores in the body. Athletes must combine that with immediate protein to rebuild muscle.

“For quick, simple carbs, protein shakes have a 4:1 carb-to-protein ratio, perfect for after workouts,” he says. “Chocolate milk is getting a big push right now; it’s a great recovery drink that gives athletes carbs and protein.”

Simple carbs can also be found in fruits, such as apples, oranges and bananas. If athletes are eating simple sugars right after a lift, those sugars will hit the system quick and replenish the glycogen stores athletes lose during a workout.

Young athletes must also be eating small meals every two to three hours during the day, which is a real departure from the classic “three-meals-per-day” mantra. As soon as they wake up, they need to be eating breakfast within 30 minutes. Their next meal needs to come two or three hours later.

“One of the worst things you can do as a high school player is skip breakfast,” says Munn. “Here’s what happens. They skip breakfast and start the day off slow. They may not eat until lunchtime; then they eat a big lunch and become lethargic. Then, they may not eat again until supper. This is followed by a poor-quality, late-night snack.”

If athletes eat every two-to-three hours, they train their bodies to expect more food soon. When the body expects to eat this way, it doesn’t respond with a need to gorge oneself at mealtime. Rather, it focuses on processing the quality, nutritious foods it has received.

“These young guys need to make sure they’re eating the right stuff too,” says Munn. “Fruits, vegetables, lean proteins like chicken, tuna and salmon are all good. They don’t need to be eating donuts for breakfast. “With the juniors and seniors we have at UMHB, we’ve finally got them eating right,” he says. “It is important. During the day, they have to be watering it up. Gatorade and water can replenish carbs and glycogen after a workout. They have to make sure they are eating properly and focusing on hydration. Nutrition is huge. I don’t think high school coaches can stress nutrition enough to their athletes.”