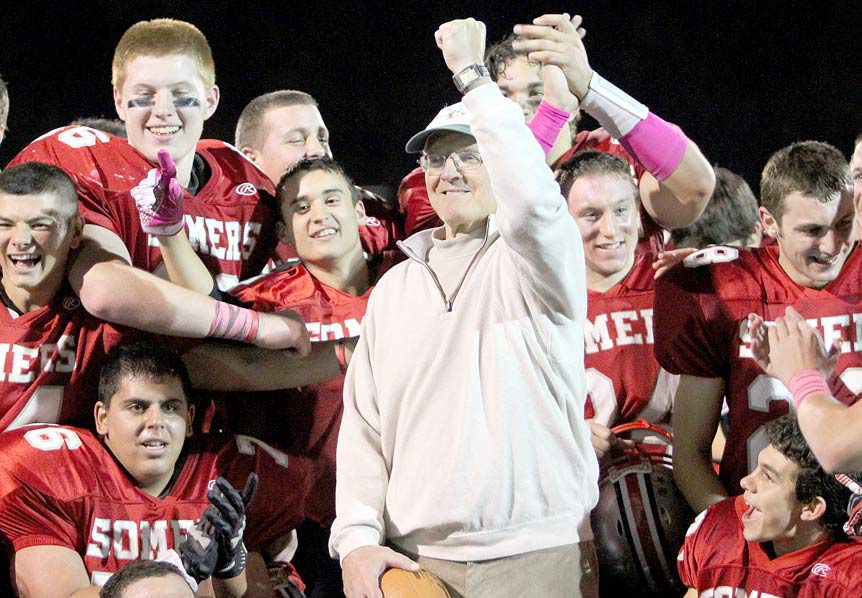 Tony DeMatteo, his philosophies and the game itself have all grown considerably over nearly five decades as a head coach. The wisdom which he has gained through decades of experience has helped him to identify what is truly valuable, a trait that helped him win the 2015 AFCF Power Of Influence Award – an award that has grown in notoriety and is now officially presented by TeamSnap during the general session of the AFCA Convention.

“When I started coaching, I did it because it was almost like playing, and even though I wasn’t playing, I could still be a part of the process,” DeMatteo says. “As the years went on, and I saw how many people I was affecting, how I was changing their lives, and how they became good people, that’s what drove me and that’s what drives me now.

“I know that I can influence kids to do the right thing and to become a good person. So if I’m affecting 50 people, and they affect 100, and those 100 affect another 100, then I have really affected society and that’s the way I think about coaching.”

One of the most effective ways in which he develops players is through his hugely successful mentoring program. DeMatteo started the program in 1993 after losing a top prospect due to hazing. After the program was up and running, the young man returned to the football field. His name was Jimmy Kennedy, and he remains the only NFL player DeMatteo has ever coached.

“We all talk about rights and privileges, but what about responsibility?” DeMatteo says. “My mentoring program teaches these kids how to be good people. You get the community interaction and you teach a kid responsibility and how to help someone. I – it’s a win-win, 100%  percent knockout situation.”

Most football players respond to leadership opportunities. Sometimes the best way to reach someone is to teach them him how to reach others. There is no fool-proof plan to reach every player on the roster, but it is always the goal.

As for teaching responsibility, part of preparing players for the real world is to help them  take ownership of everything they do. That’s the mindset DeMatteo teaches them year after year, and it’s a powerful message for young men who have plenty of circumstances in their life which are beyond their control.

“I tell my kids all the time that you can’t have a workman’s mentality. Y – you own the team;, act like an owner,” DeMatteo says. “If you see someone messing up, it’s your responsibility to fix it. You own the team. You’re the boss.”

Having ownership of their own lives is a new concept for some young men these days, but DeMatteo has been impressed with the way they have responded. He doesn’t buy into the line of thinking that kids today are not as good as they used to be. He feels it is the coaching approach in need of changing, not the players.

“People think that kids have changed. Kids have not changed,” DeMatteo says. “Kids today have the same pride and the same work ethic and are the same great kids I coached 30 or 40 years ago. The only difference is their attention span. Are they not good kids? That’s a lie. Coaches who think that way are coaches who can’t coach.”

DeMatteo cites the vast amount of technology and sources of entertainment as the cause of this dip in attention span over the years. As a result, he has chosen to model his practices after a video game. Quick, challenging drills which keep his players moving and thinking has helped his program to maintain its quality in the information age.

In an area of New York where some schools aren’t able to field freshman or junior varsity teams, the Somers program continues to flourish. The youth, freshman, junior varsity and varsity programs have each all enjoyed a high level of participation and success, and DeMatteo attributes it all to the mentoring program and their a focus on teaching players from a young age.

This article was written by Adam Reed, associate editor of AFCA Magazine and AFCA Insider. Reed can be reached at @fbcoachdaily.