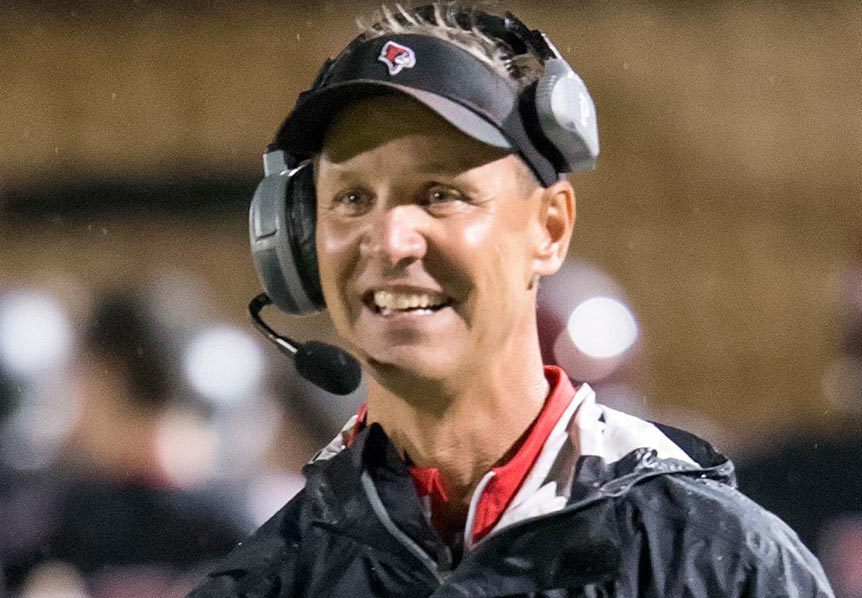 It was the spring of 2005. Sam Harrell liked to play tennis with his school’s principal and a couple other guys. They’d meet once a week and knock a few balls back and forth. One night, as Harrell began to heat up on the court, he began to lose his eyesight. In fact, he couldn’t see out of one eye at all. He went home a little shaken, but in fairly short order, his eyesight just went back to normal.

Then it happened again.

His doctor tried to be optimistic, but Harrell could read the writing on the wall.

“Of course, I didn’t know a lot of people who had MS at that time, and the ones I did know were in wheelchairs,” he says. “In my mind was the thought that I was about to lose the ability to coach. There was a lot of uncertainty. That day he told me, my wife was with me, and I can remember driving home from Dallas to Ennis. I can just remember crying and thinking I didn’t know what was going to happen.”

Ten years later, Harrell still becomes emotional when telling the tale. Nothing can prepare you for that sort of news and those scars run deep.

“We didn’t want to interrupt their lives by telling them that dad is sick,” he says. “So we didn’t tell anybody for a couple of years. No one.”

Harrell’s meds didn’t work well. It soon became obvious that something was wrong with the way he walked, and he continued to go downhill. By 2007, Harrell was coaching from a golf cart. By 2010, he wasn’t coaching at all.

Harrell was in a low place. His “hope meter” was near bottom. His doctors told him he would never get better from this.

The he receive a phone call from a friend who knew someone with MS that had visited the Stem Cell Institute in Panama and received a stem cell treatment that seemed to be doing some good.

“Just the thought of something out there and my hope meter improved,” he says. “So I started taking some steps, getting information, reviewing websites. I can remember friends and others thinking I was crazy. My wife wanted me to be cautious.

“I remember praying and asking God, saying he, if you don’t want me to go down this path, just slam the door shut so I know. But the doors just kept opening, and I kept going through them.”

Harrell applied for treatment and was accepted. The financial cost was enormous but football coaches from around Texas and the Ennis faithful chipped in and shouldered it for him.

“It took three treatments before I saw anything that was good,” he says.

The first two treatments involved the re-introduction into Harrell’s body of stem cells that grown from both Harrell’s cells and from umbilical cord-derived adult stem cells.

“The first and second trip, I saw slight changes and improvements early but they would just go away,” he says. “After my second trip there, I was as low as I’ve ever been. I had virtually no mobility. I used a walker at the house and was about six months from a wheelchair.

“I don’t know why I went a third time. My wife reminds me that it’s the power of prayer and God smiling on me more than anything. For whatever reason, that third time I saw some changes and in the back of my mind, I thought they were going to disappear again. But this time they didn’t.”

Harrell wasn’t exactly walking again in a week, but he began to see incremental improvements that began to snowball. He could do more for himself, then he would feel even better and do even more.

Harrell made daily trips to the mailbox earlier in his illness to ward off boredom and give him something to do.  One day, he saw his bicycle in his garage, and in the not-too-distant past, he couldn’t have even ridden a stationary bike.

“I can remember that day,” he says. “I was getting better and I thought, maybe I can ride my bike. Man, was I ready to try. So I got on it and I rode it.”

His neighbor, who had gone from seeing a healthy, young football coach walk to the mailbox, to watching an ailing man struggling down his driveway, suddenly saw the same man come flying down the driveway on his bicycle. His neighbor says it was the best day of his life.

Harrell returned to Ennis for a year before he landed his current job at Fort Worth (Texas) Christian School as offensive coordinator. His resilience and power of influence on his players helped him win the 2015 AFCF Power Of Influence Award – an award that has grown in notoriety and is now officially presented by TeamSnap during the general session of the AFCA Convention.

He jumps up in the morning, throws on his clothes and shoes and he goes to coach again. He says he feels as though he has been reborn.

“If people had asked me in 2011 or 2012 if I thought I would coach again, I would have asked them if they were crazy,” says Harrell. “And now all of a sudden, I am. People tell me how amazing it is, and I tell them, believe me, I’m as amazed as you are. For me to coach again, I’m still amazed. It was the grace of God and those stem cells.”

Some risks are worth the reward.

This article was written by Paul Markgraff, managing editor of AFCA Magazine and AFCA Insider. Markgraff can be reached at @fbcoachdaily.