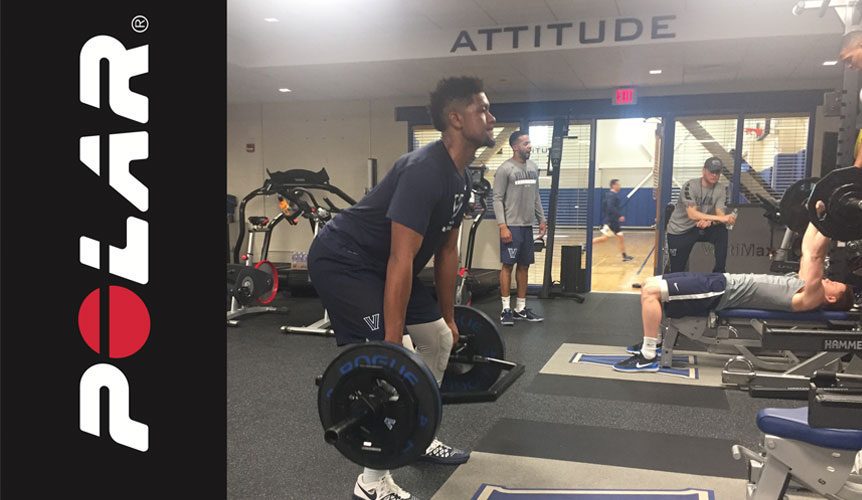 The final second ticked away as the ball sailed through the air, plunging through the net with a satisfying clunk off the back rim as time expired. And then…pandemonium! Confetti rained down as the Villanova Wildcats basketball team secured their second National Championship in program history, defeating North Carolina in an instant classic.

The hero of the day was Kris Jenkins, connecting from way downtown with a hand in his face to lift his team to victory in the final game of the 2016 NCAA Tournament. It hasn’t come easy for the young man who looked like a cold blooded assassin on that fateful day, and a lot of hard work goes into one shining moment.

John Shackleton, Villanova Strength and Conditioning Coach, tells the story of how Jenkins struggled at times to stay in peak physical condition. Some athletes, like teammate Josh Hart, seem to remain in excellent shape year round, but that just wasn’t the case for Jenkins.

After Villanova finished celebrating their title, Jenkins wasn’t where he needed to be physically. After a month off, Shackleton had his work cut out for him.

“As I monitored him with the straps in practice and open gyms I’d gather the numbers so I could know how he was doing,” Shackleton says. “As we started training, his body composition started changing, his muscles started going up and his body fat started going down.

“When I looked back at his numbers, by the fall he was doubling his sprint numbers, meaning he was moving more explosively because he dropped body fat. So I was able to go back and look at the trends.”

Shackleton monitored Jenkins’ progress using the Polar Team Pro System. The hard work in the off-season payed off, and Jenkins played 111 minutes in 34 starts for the Wildcats in 2017.

“It validated what I do in the weight room,” Shackleton says. “This is why we train – changing body composition, getting stronger, and then you can produce more force, you’re lighter and more explosive.”

The success of Shackleton’s off-season training program is based on an intelligent approach powered by objective data. The Team Pro System shows Shackleton and the rest of the staff trends in key factors like distance, speed, heart rate, acceleration and deceleration. It’s all provided in real-time and is readily available for both coaches and players to keep an eye on.

Not only does Polar help Shackleton provide better training for athletes who are struggling, it also allowed him to understand how to push those “athletic freaks” like Hart who just don’t ever seem to be challenged. Hart was the leading scorer for the ‘Cats in 2017, and is widely considered to be first-round NBA talent, and there’s a reason why he is so coveted.

“When I was first learning about Josh, I’d think he was a dog on the court,” Shackleton joked about his misconceptions of Hart’s effort. “It turned out he was just better conditioned than most of our guys because he’s a freak. He would recover so fast.”

Shackleton went on to explain how Villanova had to alter the way they practiced in order to push Hart. Stopping in the middle of practice to break down technique regularly was just too much of a break for such a well-conditioned athlete.

“I said coach, ‘This guy isn’t getting the conditioning because you’re stopping everything and not letting him run,” Shackleton says. “It wasn’t really that he was a dog. He was really efficient and knew where his body was in space to expend less energy, but still make the plays when he needed to.”

Hart was the leading scorer and rebounder for Villanova in 2017, and it wasn’t even close. He was also second on the team in both assists and steals, and was on the court longer than any of his teammates.

Coaches without the added benefits of Polar’s physiological data tracking might have been stumped by such a challenging situation, but Shackleton was able to see the clear way forward for Hart. The end result was an even better version of an athlete that was already elite to begin with.

There is no replacing talent, but it’s what coaches do with the talent on their roster, and how they develop it that makes the difference between being good and being a champion. It’s true no technology is a substitute for hard work, but having the right technology will ensure the hard work leads to success.

Polar is the Pioneer of wearable sports and fitness technology and leader in heart rate monitoring, activity trackers and training computers. With nearly 40 years of experience and a proud heritage in innovative physiological and sports medical research, we cater to all levels of fitness by offering a comprehensive product range including cycling computers, wearable sports devices and activity trackers, training apps and online services. Our award-winning training computers are the number one choice among consumers worldwide, being sold through over 35,000 retailers globally. Headquartered near Oulu in Finland, Polar is a privately held company that operates in more than 80 countries including U.S. headquarters in Lake Success, NY.