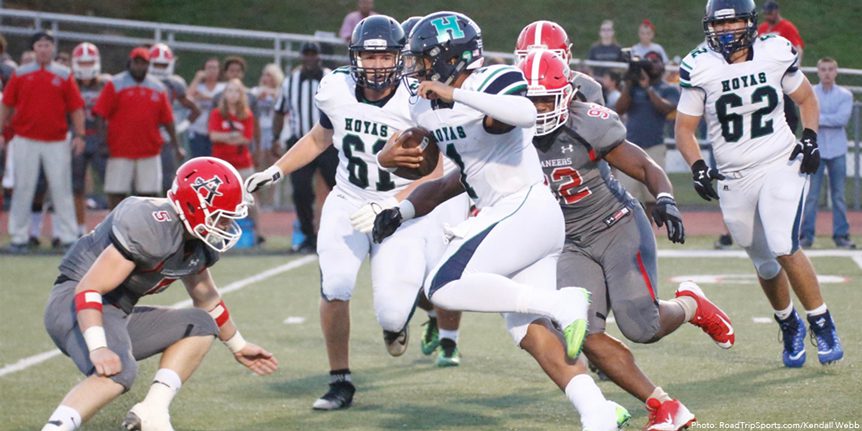 Offenses in the modern era are built to put an extreme amount of pressure on a defense by using space to their advantage. One athlete on the field that tends to excel with having more space is the quarterback.

Easier reads and more avenues to run are some of the many advantages quarterbacks can benefit from. Offenses exploit these advantages through different quarterback read run schemes and run pass option plays (RPOs). I am hoping to give insight into how to defend this type of offense using a 2-high shell and split-field coverages.

A defense with athletically skilled players at defensive back will more than likely turn to a cover 1 scheme to stop RPO teams, and use the six defenders in the box to handle the run (See Diagram 1). The ability to play man is a bonus at a lot of schools, especially if your defensive backs can play man-to-man in the slot. Offenses will see equal numbers on the perimeter and defer to the run part of the RPO scheme.

In this thought process of stopping the RPO scheme, you put a lot of pressure on the defensive end to be able to play the quarterback and the jump cut of a running back in a read-run scheme. If you don’t have the bonus of having a defensive end with length and quickness, you become very vulnerable to the quarterback having success in the run game as there is a lot of space for one player to cover. If you do not have those luxuries discussed above, it may be time to transition to using a 2-high shell to help solve this problem in your base defense. Playing a 2-high shell will now allow you to use 6.5 defenders to stop the run rather than the six provided by a single-high look. The extra half defender will be used to aid in stopping the quarterback run game.

When deciding where to pick and choose your six defenders to stop the run in 10 personnel, you should be under two assumptions:

In a 2×2 offensive set, this selection of run fit players dictates you to play two defenders over two offensive players away from the back and 2.5 defenders to the running back. (See Diagram 2)

From a straight numbers perspective, this math should allow you to feel comfortable with your defense to stop the run, stop the quarterback run and stop the RPO game. The Will linebacker in Diagram 2 stays your B gap defender from an apex alignment. If the split of the No. 2 receiver creates so much width from the B gap, the ability to gap exchange with the end is always a good option.

The fit outside the box needs to have an understanding that in most cases, the fit he will be making will be against a run flow coming to him. The fitter cannot be in a hurry to sprint to the fit. This patience will keep the quarterback from seeing the numbers to attack that side with wide receiver screens.

In turn, having this fit in your scheme allows the defensive end to feel more confident in playing his responsibility vs. a read-run scheme. It allows the defensive end to be more aggressive to make sure the jump cut of the running back is being handled. The same scenario can be played out vs. a 3×1 set as well. Only difference being it will be 3 over 3 and 1.5 over 1 (See Diagram 3), or 3.5 over 3 and 1 over 1, depending on running back set. The next aspect of making sure you fit the run properly is making sure your coverage responsibilities keep your guys out of run/pass conflicts, and the main guy to make sure is out of a conflict is the player who is fitting from outside the box.

Your split-field coverage for that side should be an easy coverage for the apex player to play. An option like a man coverage or palms (read #2 cover 2) could be good solutions to helping your apex player be in the run fit. (See Diagram 4)

To the running back side, you want to make sure you’re sound vs. the RPO scheme you will see that week, whether it be a true quarters look or a cover 2 look, your apex player should be able to be patient in his run/pass fit. In a 3×1, with the running back away from the three-receiver set (See Diagram 5), you want to make sure your apex player to the three-wide receiver set doesn’t have the conflict of playing a gap and carrying a vertical. Using coverages such as playing man on No. 1 and palms on No. 2 and No. 3, or having the weak safety carry the vertical of three, allow your apex player to be comfortable in his run/pass fit. If the running back is to the three-receiver set (See Diagram 6), you want to play a combo coverage on the single receiver side that allows one of the defensive backs to be in the run fit such as a trap coverage or an inverted cover 2 look. These split field coverages can provide a solution if you are struggling with a good running quarterback that has the space to work. Just like every solution, there will be some weak points in what you do.

Playing split field coverage can expose your defensive backs to a lot of man-to-man situations where they may or may not have help. Playing a 5.5-man box can make you vulnerable to giving up yards if your interior defensive lineman cannot demand and hold the point vs. a double team. Gap-scheme runs away from your fitter outside the box can put pressure on your sixth man to the fit. The offense may free release the back to make two-, three- or four-man route combos. The offense may get in the pistol to confuse the defense on a pre-snap read. These are just some of the situations that may arise for a defense to defend.

RELATED ARTICLE: Defending the Spread at All Three Levels

It is imperative that you have answers to what the offense is going to attack you with once they know schematically what you are doing.

Are they blocking a run scheme with to take care of a five-man box? Use line movements to put pressure on the offensive line in a man scheme.

Are they using a pulling lineman away from your extra fitter? Change your sixth fitter or run pressures to the running back. Are they free-releasing a running back into their route combos? Bring pressure and trade hits on the quarterback because there is a finite number of dudes that can make a team roll at that position.

Are they getting in pistol to not give a pre-snap read? Good. They’ve limited their drop-back game and made themselves a run or naked team. Change your pressures off something not related to the running back, for example, field/boundary or passing strength/non-passing strength.

These stimulus-response situations can give an advantage to a defensive staff and defensive side of the ball. Not all options you choose may be the correct one and you will take lumps along the way, but if you have a plan of anticipation instead of reaction, and your kids believe in you, then you have a great chance to succeed on defense.