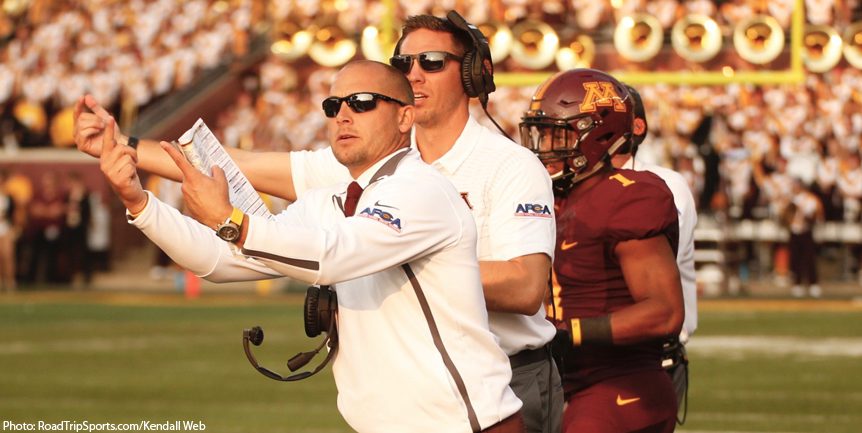 “My background is in elementary education,” says Fleck. “One thing I’ll say about teaching sixth grade is you learn 30 different ways to teach one lesson. I think that’s what has kind of helped me become a head football coach. Especially in 2018, you have to find these ways to continue to stimulate your football team and continue to keep them interested in everything that you’re teaching or talking about.”

Fleck isn’t just talking about football either. He says that he must keep his athletes engaged in the holistic sense of the word, meaning athletically, academically, socially and spiritually.

“Coaching is way different in 2018 than it was in 2008,” says Fleck. “All areas of the student-athletes’ lives are affected by everything they do in college. I have to teach these four areas more than I ever have before.”

As any good football coach knows, teaching and coaching is about so much more than X’s and O’s. Don’t get me wrong. You can never skimp on your understanding of the game. At the same time, understanding your student-athletes goes hand-in-hand with teaching them how to play the game in your system. The common thread that runs through it all is a team’s culture.

The job of a football coach is to teach lifetime lessons in a cultural way, Fleck says. Football itself is a lifetime lesson, but every year, cultural changes take place in a program, whether that’s with your players, coaches, system, processes, recruiting, whether that’s through offense, defense and special teams, or schematics, or whether that’s through relationship-building. All of that has a place in your program’s culture, and each year, coaches must find ways to evolve and improve in each aspect.

This is complicated by the fact that, at the Division I level, nearly all of your players come from somewhere else and don’t know each other. They have no shared history and different backgrounds, and outside of being one of the best players on their high school teams, each student-athlete’s journey to the Big Ten stage is unique.

“Think about it,” says Fleck. “I have kids from all walks of life, from every demographic, a lot of races, a lot of financial backgrounds, a lot of spiritual backgrounds, and all believe different things, and were raised differently and by different people. Now, you put 125 young people in a room and say, ‘Okay, well, we’re all going to be family. We’re going to do all the right things, and we’re going to represent the University of Minnesota in first-class fashion.’ That’s great to talk about, but if you’re not educating players on how you’re going to do that every single day, and you’re not going to invest holistically in their lives every single day, then it’s just coach talk.”

“When you take over a program, all 125 players have to adapt to your culture for at least two years, until you start getting freshman that come in with those who have already bought in.”P.J. Fleck, Head Coach, University Of Minnesota

Fleck points at the difference between sympathy and empathy as a method for showing players you’re not all talk, but rather, you have their best interests at heart.

“I think sympathy – having the exact same experience as someone else – you can put yourself in their shoes,” says Fleck. “That’s a great way to connect, but in college football, it’s more about empathy, where you have an understanding, but you haven’t walked one step in your players’ shoes. As long as you try to understand, and steer resources toward players’ needs, then I think players respect that. Not everyone can say they’ve walked a mile in someone else’s shoes, but if you try to imagine it and start building relationships based on that, that’s where people from all walks of life can still connect.”

Fleck says it takes two or three years to establish a foundational culture within a program because culture is primarily about consistency. When freshmen arrive on campus, they first need to learn what they can and can’t do, and that must be taught through a series of established processes. They have a saying at Minnesota: “Bad teams, nobody leads. Average teams, coaches lead. Elite teams, players lead.” It reflects Fleck’s desire to create a program in which his players assume leadership roles and consistently model the desired culture of the team.

For Fleck, with time, consistency and a focus on cultural values, his players mature in ways they don’t necessarily expect to.

“We define maturity as, ‘When doing what you have to do becomes doing what you want to do,'” he says. “If our guys don’t know what they have to do because it’s a new program, that takes a couple of years for this maturity to take place. Once the expectations are laid out for them, they know what they ‘have to do.’ Once they want to do it, they also know every reason why they want to do it. That shows a very mature football team. That’s when you start seeing players lead elite football teams. ”