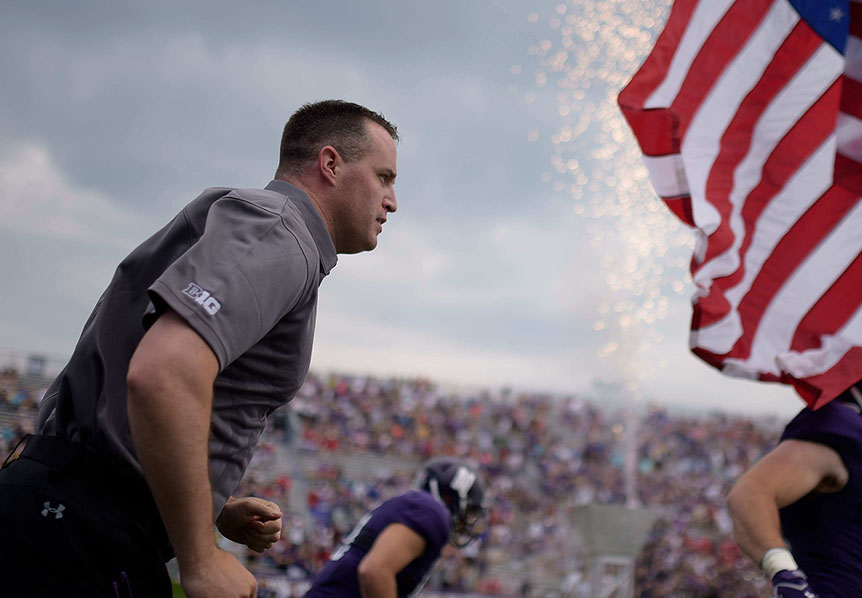 Pat Fitzgerald’s dream job was to be the linebackers coach at his alma mater, Northwestern University. As he progressed through the ranks as a graduate assistant at Maryland and Colorado, then earned his first assistant job at Idaho, Fitzgerald kept his eyes on that prize.

By 2001, Northwestern hired him to coach the defensive backs. By 2002, he was moved to the head of the linebackers … the dream job achieved at the ripe age of 27. But by now, Fitzgerald had been immersed in the college game. He had a passion for learning. He observed coaching styles of his peers, noting the things that worked well, and understanding why others didn’t. Fitzgerald was promoted to recruiting coordinator to go along with his linebackers coaching job in 2004, then set his goals higher.

“I had a meeting with Coach [Randy] Walker about my goals and where I saw myself going,” Fitzgerald recalls about a discussion with the late Northwestern head coach. “I told him that some day when you are ready to leave, I want to take over for you. He saw that as a bold statement. But, from there, he told me a big part of his job was getting me prepared. After hours, I used to sit in his office, ask him questions and learn from him.”

Sadly, and unexpectedly, Walker passed away on June 29, 2006, and it was then that the Northwestern leadership tapped the then-31-year-old Fitzgerald to take over the head- coaching duties. It was his first time leading a program. He was honored by their trust and faith. But, Fitzgerald admits, looking back now, he wasn’t sure he was ready.

“Sure, I told everyone I was prepared but when I laid my head down at night, I wasn’t as positive,” Fitzgerald says.

That internally unsure 31-year-old took his lumps his first year, as most rookie head coaches do. The Wildcats finished 4-8 overall and 2-6 in Big Ten play. Since then, however, Northwestern has ascended to a Big Ten power and a national contender. He’s led the program to two Big Ten West Division titles in the last three years. He’s Northwestern’s all-time leader with 106 victories. He’s the second-longest tenured coach in the Big Ten.

And, now he’s the 2021 AFCA president. In a long line of honors, Fitzgerald considers this as one of the most important.

“This is one of the highest honors I could hold,” Fitzgerald says of his year as AFCA president. “I’m going to think of the players first, coaches second and always work for the greater good of the game.

“It’s been ingrained in me since I was young, to be a servant, and this is another way for me to serve the game.”

He has been serving with the AFCA since 2012 when he was named as the Big Ten representative on the AFCA Board of Trustees. Fitzgerald also led the AFCA ethics committee for seven years at the bequest of former AFCA Executive Director Grant Teaff.

“Knowing that Jim Grobe had led this committee, a man of the highest moral and ethical character, I was honored to do it,” Fitzgerald says.

Fitzgerald also sees the role of AFCA president as one of a mentor, and he knows just how important head coaches are to assistants and players. If not for his high school coaches, Fitzgerald says, he may not be in this position.

“When I was young, I wanted to go into business, whatever that means to someone that age. But, I also thought I could be a high school coach and teacher. During my playing days at Northwestern, I fell in love with the college experience. Other than my parents, my coaches were the biggest influences on my life.”

His college experience was one for the ages. He won both the Nagurski and Bednarik awards twice — the first player to achieve that honor. He was a two-time, first-team All-American and his distinguished career led to a 2008 induction into the College Football Hall of Fame.

After having “a cup of coffee” with the Dallas Cowboys after graduation and being cut from the team, he moved into his coaching career.

He credits Ron Vanderlinden (Maryland), Gary Barnett (Colorado and Fitzgerald’s head coach at Northwestern during his playing days), Tom Cable (Idaho), and, of course, the aforementioned Walker as instrumental in shaping him as a young coach.

“Working under those coaches, you could figure out who you are. Those early jobs showed me how to build relationships, manage players and lead the players in my position group,” says Fitzgerald.

Despite all those important experiences, Fitzgerald says the learning curve was steep as a new head coach, especially beyond the on-field instruction for players. He admits at first he saw Northwestern through the eyes of a linebacker, as that’s what he played and coached. He had to learn to lead.

“I figured out I had to be comfortable being uncomfortable. I needed to be a better listener. And, I needed to trust my staff more. I had to become less of a micromanager,” Fitzgerald says.

When he defines being a leader now — with much more experience under his belt — he describes someone who is “genuine” and “authentic.” The leader must have a clear vision for the program and aspirational expectations — and express incredible passion … almost to a fault.

“You have to be comfortable in your own skin. I tell people all the time, ‘You have to excuse my passion,’ because it’s something that is a part of me, and part of this program,” he explains.

If there ever was a time to test the leadership and passion of a football coach, it was 2020. The COVID-19 pandemic affected every team but certainly not in the same way.

While several programs had to pause, sit out players and scramble to fill holes due to contact tracing, Northwestern didn’t have a single positive test straight through the Big Ten season. Their first positive test didn’t happen until December 24, 2020.

“They established the policies and procedures for our team, and they went out of their way to educate the players, their families and our coaches about how to stay safe,” Fitzgerald says.

Of course, none of it would have been possible without the players strictly adhering to those guidelines. It’s not easy to rally a bunch of 18- to 22-year-olds in an effort to limit social encounters.

“The players already are sacrificing the typical college experience, and then this past year, they had to do so even more. The commitment they made to each other was incredible,” Fitzgerald says. “I may look back someday and think that this 2020 team may have been the most dedicated, selfless group of men I’ve ever coached.”

And, at Northwestern, it wasn’t a situation in which the players must follow protocol while the coaches bend the rules. Fitzgerald notes he only filled his car with gas twice in the fall, as he simply went from his home, to the office, and then back home.

At home, the pandemic and importance of staying safe wasn’t lost on Fitzgerald’s family either. He recalls a parent- teacher conference in which his sixth-grade son, in response to a question from the teacher about his concerns, said, “I don’t want to give my dad COVID.”

With his son’s words echoing across his mind, Fitzgerald knows he’s a family man. He will be a husband to his wife and a father to his three sons long after he’s a coach. He knows how important the family dynamic is and he doesn’t take his responsibilities lightly.

“I want to support them the way they’ve always supported me. There is no ‘my time’ anymore. When I’m home, I’m with them. When I take time off, it’s to spend with my family on vacations or at baseball games.”

Fitzgerald adds that while past coaches may have spent 80 or 90 hours a week in their office — sometimes sleeping there — that’s not necessary today. Technology allows coaches to achieve the balance they’ve always wanted. When he needs to call a recruit at night, he can do it from the comfort of home, sometimes after his kids are in bed.

This sense of family extends to his coaching staff. As he mentioned, he’s not a micromanager anymore. He has full trust in his staff to get their jobs done while they also attend their children’s games, recitals and events.

Along with that sense of family, another intrinsic part of the Northwestern experience is academic success.

Six times during Fitzgerald’s tenure, the Wildcats have won the AFCA Academic Achievement Award. They’ve ranked first or second in Graduation Success Rate (GSR) for the last 10 years, including 2019 when Northwestern posted a perfect GSR score — a first for a Power 5 program. Last fall, 69 players earned a spot on the Academic All-Big Ten team, which helped the team achieve an Academic Progress Rating (APR) Public Recognition Award from the NCAA, which is given to programs ranking in the top 10 percent of their sport. Northwestern was the only Big Ten program to achieve this.

Fitzgerald gives all the credit to his student-athletes, as well as Senior Associate A.D. for Academic Services Kristin Kane Herbison.

“We recruit players who have an understanding of the value of a Northwestern education,” he says. “This academic experience can change your life forever. Our players know that.

“The culture of our locker room is that we are going to dominate everything we do, and that includes in the classroom. We are not holding their hands. We treat them like young men. We provide them with structure and encourage them to proactively ask for help rather than procrastinating.”

Back in the 1990s when he was playing, Fitzgerald notes, coaches recruited against Northwestern due to academic standards. These days, he recruits it as a positive and part of the Wildcats’ identity.

“You’re going to get pushed here to be your best in so many ways. There is nothing easy,” he says of his team that posted a collective 3.34 GPA last season. “It’s what makes us special.”

The Northwestern experience also is special due to the incredible amount of community service the players and coaches accomplish on campus, in Evanston, Ill., and in the surrounding communities.

Once again, Fitzgerald shifts the credit to the players.

“The players are the guiding force for the service we do. They are passionate,” Fitzgerald explains. “So many of them ask me during recruiting what kind of service projects are done here.”

The Wildcats participate in many projects to amplify student-run organizations. One of the largest is the Northwestern University Dance Marathon, which consists of more than a 1,000 student dancers. The event raises around $1 million for varying primary beneficiaries each year, recently including Children’s Home Aid, Communities in Schools of Chicago, and Cradles and Crayons.

Northwestern football players also offer their time to Camp Kesem, a free summer camp for children whose parents are fighting cancer. The Northwestern group coordinating and running the camp is led by college students.

Fitzgerald, who was named the honorary coach of the 2017 Allstate AFCA Good Works Team for his community service, adds that the team has been exploring more causes for social justice as well, which he says is an area where he wants to “grow and improve.”

It’s no surprise that Fitzgerald, who already has achieved so much, continues to want to get better for his team’s and family’s sakes.

He points to a conversation he had with the late Joe Paterno, a coach who was “very generous with his time” during Fitzgerald’s early coaching career.

“Coach Paterno told me you either are learning and improving, or you’re dying,” he recalls.

Despite the on-field, in-community and classroom success, Fitzgerald continues his journey of learning and improving. His year as AFCA president is another step in helping shape the game he loves so much.