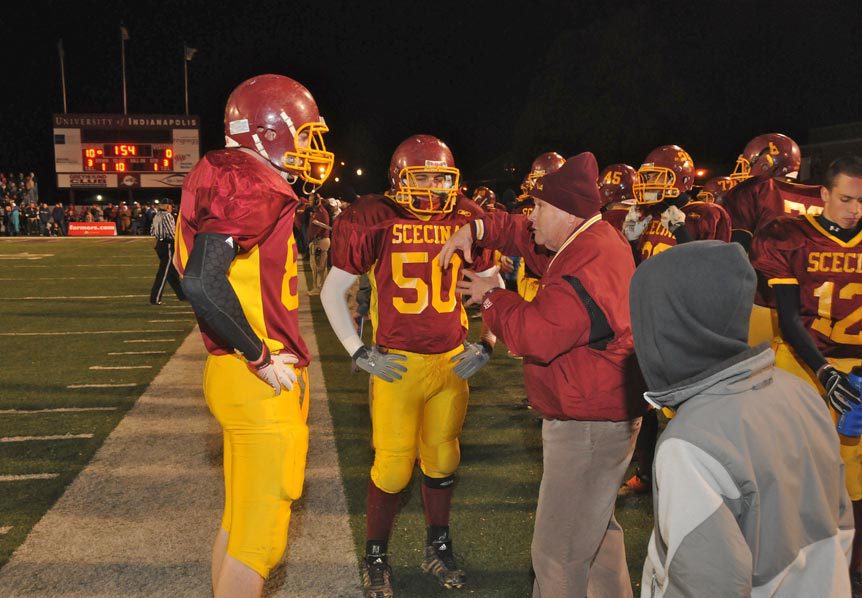 During Ott Hurrle’s senior year as a football player at Scecina Memorial (Ind.) High School, Ken Leffler took over as head coach of the Crusader program. As fate would have it, the new head coach ultimately had a profound effect on Hurrle, becoming a mentor in only one brief year as a player-coach relationship that eventually turned into a 14-year working relationship (where Hurrle worked as an assistant coach on Leffler’s staff) and life-long friendship.

Looking back, Hurrle is amazed at how quickly Leffler bonded with the seniors on his new team. It’s a testimony to the type of coach Leffler was and a coaching-personality style that Hurrle tries to employ to this day.

“When he took over as our new head coach, all of us on the team immediately saw that Ken Leffler genuinely cared about us,” says Hurrle, winner of the 2014 AFCF Power of Influence Award – an award that has grown in notoriety and is now officially presented by TeamSnap during the general session of the AFCA Convention. “Forget the fact that he was the new coach. Players can tell when a coach genuinely cares. And our bond was forged with him in pretty short order.

“We could see that he cared about us, wanted the best for us and wanted badly for us to succeed. And that came across in everything he did every day – from the way he prepared for each game and every practice – to creating an environment where he made sure that his players were having a good time playing football. He created an incredible bond in a very short amount of time. And it was primarily because we could tell he cared about us.

“To this day, all my old teammates and I still discuss the lifelong impact that Ken Leffler had on us from that very first year – until the day he passed away years later.”

When Hurrle got into coaching, it was as a member of Ken Leffler’s coaching staff. He remained on Leffler’s staff for 14 years.

“His influence on my development as a coach was enormous,” says Hurrle. “As a young, inexperienced coach, I think it’s only a natural to come in as part of a staff and be very much a rah-rah, excited, aggressive coach when you interact with players. Ultimately, you end up becoming a little too intense or overzealous.

“Well, in very short order, Ken pulled me aside and said, ‘Listen Ott, you are not going to get anywhere with these players by constantly harping on them. You need to back off, continue to teach them and then pick-and-choose the moments to get on them. If you’re always yelling, it loses its impact and they’ll tune you out.’

“He also showed me the importance of preparation as a coach. You can’t just show up at 3:00 pm, start coaching practice and then head out at 5:00 pm or 6:00 pm. He pointed out to me that players are a lot smarter than you think – and they’ll pick up on whether or not you know what you’re talking about, or if you’re just trying to fake your way through a practice.

“And if you’re not prepared, players won’t respond in a positive manner. That is a lesson I still carry with me to this day. I am prepared for each and every practice.”

After 40 years as a teacher and football coach, Ott Hurrle has impacted the lives of thousands with the power of his influence. When you see the influence that his own parents, siblings, neighborhood community, school, mentors and friends have had on his own life – you see a man who has learned to pay it forward to others.