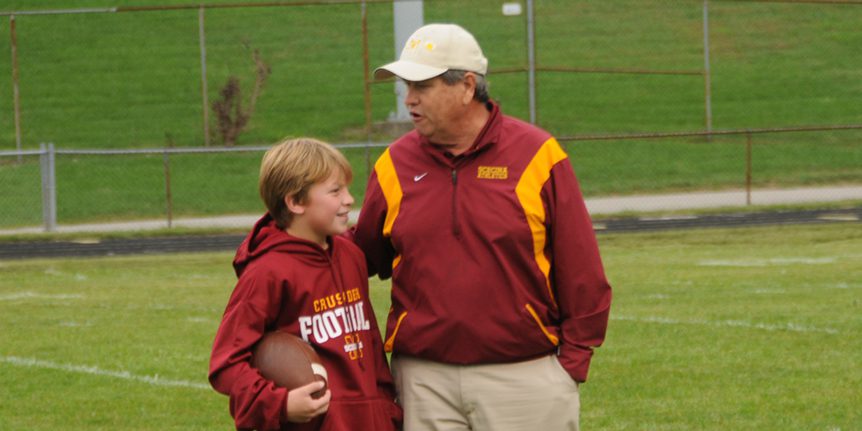 Individuals like Ott Hurrle, who evolve into people of great influence, are usually found to be an amalgamation of their family and community, as well as having absorbed the attributes of key figures who become mentors during formative periods of their lives. It is in this regard, that you can see how the blueprint for Hurrle’s philosophy was forged.

“I grew up in a large family. I had four brothers and four sisters,” says Hurrle, winner of the 2014 AFCF Power of Influence Award – an award that has grown in notoriety and is now officially presented by TeamSnap during the general session of the AFCA Convention.. “It’s amazing. My father, who also played football and who was a World War II veteran who was involved in the ‘Battle of the Bulge,’ was really a very gentle man – but he had a way of communicating that definitely let you know when you were getting out of line.”

Hurrle says that his dad taught all nine of his children about the value of hard work, and that he stressed the importance of always being in a position to help others.

“My dad ran a sporting goods store, and as a child, I watched him give a lot of equipment to poor families,” says Hurrle. “If he knew a family was in dire straits and their kids couldn’t afford equipment, he would very quietly, out of public view, help get them equipment and clothes.

“So as children, my brothers and sisters and I all observed what he was doing for less‑fortunate people.”

Hurrle said his mother was very much the same way. While physically a small woman, he says she enforced the rules and all nine of her children knew not to get out of line around her.

Another important aspect of his youth that still resonates with Hurrle is the fact his parents always welcomed their children’s friends into the house at all times, with open arms.

“As you can imagine, with nine kids and all of their friends in the house, my home became quite the little community beehive of neighborhood activity,” says Hurrle. “And I think all those little things subtly seep into you as you grow up and help form you into the person you are going to become as an adult.

“Even though you’re not aware of it as a child or adolescent, in looking back, there’s no doubt that’s what made you the person you are today. There’s a lesson to be learned in that for all of us as coaches. You are imprinting on young people every day. We need to remember that.”

With the fact that his childhood home and neighborhood were all tight knit and close, perhaps it should come as no surprise that Hurrle has subsequently remained head coach at his alma mater, Scecina Memorial, throughout the majority of his professional career, with its smaller-sized enrollment, family atmosphere and sense of community.

“There’s no doubt that’s the reason why I’m drawn to Scenina Memorial,” says Hurrle. “My childhood home was a neighborhood community. And sometimes there are fights in that community.

“But at the end of the day, my parents and my friend’s parents always knew that someone was always with someone else – and that collectively, the kids were safe, because they had others around them.”

During Hurrle’s playing career in high school and college, he was as an undersized center who always achieved beyond his physical limitations. His large family background paid dividends later on the football field as both player and coach.

“Growing up, the situation was competitive and it made me a better player. I mean, even 40 years ago, there just weren’t too many 160-pound centers around in high school football. So it all served me well and engrained a competitive spirit that not only did I possess as a football player, but that I also carry with me to this day as a coach.”