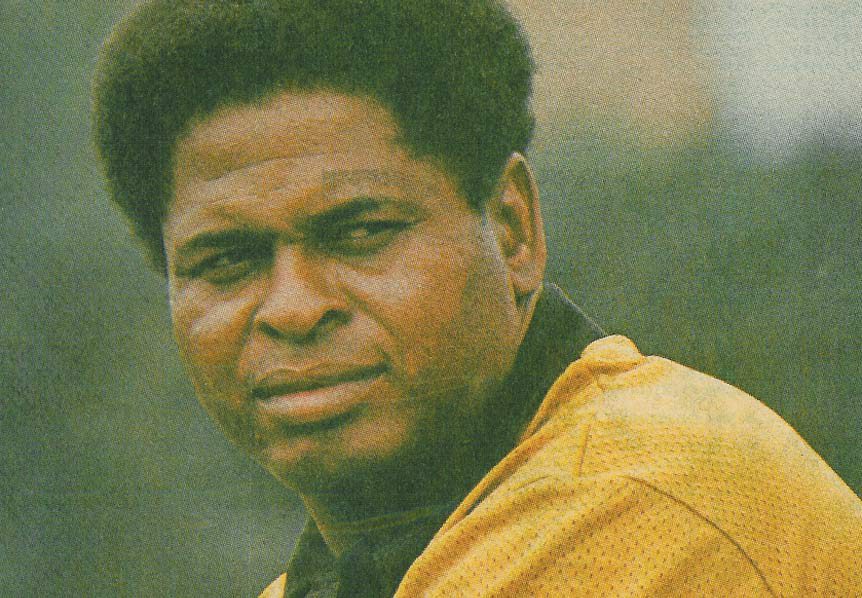 In 1965, one year after President Lyndon B. Johnson signed The Civils Rights Act of 1964 into law with Dr. Martin Luther King Jr. standing at his side, Oree Banks took over as head coach of South Carolina State University in Orangeburg, S.C.

Born in 1936, his lifelong journey to that particular coaching position, and his well-deserved Hall of Fame status among football coaches and educational institutions, was guided in part by what he learned beginning in his childhood hometown and on the high school football fields of Newton, Miss.

“We really experienced some hard times, but we experienced some good times, too,” says Banks of growing up in Newton with his parents, sister and brother. “We were well known in the little city of Newton. My daddy knew practically everybody. Our family was well-thought-of in Newton, among blacks and whites. We lived a good life.”

“I didn’t [enlist] during the time that people were going overseas and fighting,” he says. “I hooked up in terms of ‘special service’ – that’s what it’s referred to – and I was assigned to a medical unit. I was also in the medical corps. I was a venereal disease lab technician.

“I was very fortunate. I was participating in football and track when I wasn’t in the lab diagnosing various types of diseases such as gonorrhea, syphilis and diseases of that nature. I was very fortunate that I was able to stay in Fort Hood my entire career. I spent three years in the military. It was a wonderful experience and I had some great moments there at Fort Hood, Texas.”

After being discharged from the Army, Banks says he couldn’t make up his mind what to do. He launched his college education at Indiana University, where he played freshman football. A year later, he accepted a scholarship and transferred to Kansas State University. There, he lettered in football and earned his bachelor’s degree and master’s degree.

Banks took over as head coach of Coahoma Community College in Clarksdale, Miss., in 1960. From 1960 to 1964, his teams won the Southern Intercollegiate Athletic Conference title each year, either as champions or tied. During his four-year tenure, his program compiled a four-season record of 27-7-1 with only three losses in conference games.

“I was very successful at Coahoma,” says Banks. “Then one day, here comes a legend, who recruited some of junior college players, Eddie Robinson. I couldn’t have been more delighted in my life. He shows up and he talked to me. Before he left, he was saying, ‘Now, I’m going to be getting in touch with you after this season and ask you how you feel about joining my staff.’ That’s what kicked off my career in terms of coaching, being with him.”

Banks spent 1964 as an assistant coach under Robinson at Grambling State University after leaving Coahoma.

“I’ll never forget, 1965 was my first American Football Coaches Association (AFCA) meeting,” says Banks. “I got some money together and flew to Chicago, and I’ll never forget that. I haven’t missed too many of them since.”

Winning isn’t the only measure of Banks’ success in life and in coaching. Beyond the innumerable honors he has received over his career – too many to name in these few pages – his is a life defined by his character, his constant striving for excellence in the youth of our nation, and the foundation of love and learning that he passes along to virtually anyone who spends time with him.

These are values forged in the crucible of a fight for equality and civil rights for the citizens of our nation and the world. At South Carolina State during the late 1960s and early 1970s, Banks occupied a role as head coach under severe pressure. Football coaches at black colleges during that period faced an extreme tension, pulled in one direction by the white governors and lawmakers who administered their employment and the other direction by the righteously indignant student bodies brought up and educated amidst segregation, Jim Crow laws, Brown vs. Board of Education (1952-1954), the Montgomery Bus Boycott (1955-1956), the March on Washington (1963), assassinations of political and civil rights leaders, and so very much more.

Banks navigated these turbulent waters as though destined for it. Beginning in 1965, his program achieved a record of 22-4 in his first three seasons at South Carolina State, which secured his job from both performance and management perspectives. At the same time, Banks also offered tacit approval to student-athletes who were attracted to the campus protest movement. He walked this tightrope with precision, joining both the N.A.A.C.P. – membership of which had been outlawed in some states at the time – and the AFCA during that same year.

To this day, he is a man who is comfortable in uncomfortable positions, a trait football coaches continue to constantly seek in their student-athletes. And, his drive remains as consistent as ever.

“Unity, to me, is the greatest thing in the world,” says Banks. “For us not to be together like we should, that presents a problem. I’ve been one of those individuals who has been very involved in making sure that we share our ideas and our thoughts in terms of making the American Football Coaches Association a better organization among both black and white coaches.

“I’ve just been one of those guys that felt that we cannot stand back. We must be accountable when it comes to making this sport one of the greatest in the world. That’s been my position all these years. You have to join the AFCA and you have to volunteer and be on these AFCA committees. We have made a lot of progress over the years, but we are still not there yet.”

The reality is, according to an annual report from The Institute for Diversity and Ethics in Sport (TIDES) at the University of Central Florida, the statistics say the same thing. The data referenced below come directly from what’s become known as the “Racial and Gender Report Card: D1 FBS Leadership,” produced by TIDES. These reports are available at www.tidesport.org.

Following are some of the comparable data points from these two reports.

Finally, when we look at the racial categorization of FBS student-athletes during the same two periods, we see that African-Americans numbered 50.4% in 2009, increasing to 54.3% in 2018.

For Banks, who has strived toward visibility of these disparities for decades, the numbers are problematic to his goal of unity.

“It is disturbing to me,” he says. “We are not moving in the right direction. I’ll tell you one thing that’s going to have to happen, and that’s bring it to attention. It’s the most important factor that can ever be put on the books. We have to make people aware. The thing that causes a lot of problems, people don’t make other people aware of what’s going on. As I keep saying to people, look at the number of African-American players, then look at the coaches. It doesn’t add up.

“That’s my whole thing. Let’s put something together here. If we can perform, we can sure manage. It’s just of matter of black coaches getting an opportunity. Now, a lot of people tell me, all the black athletes who play ball, all they care about is the NFL. That’s not true. There’s a lot of black coaches out there that want to get involved in coaching and yet they’re not given that opportunity.

“So, I just feel it’s a two-way street here. Just like we encourage [African-American student-athletes] to play football, we need to encourage them to get involved in coaching. Nobody’s bringing it to their attention. But, I think this is where our leaders should make sure that they’re aware. Hey, you can be a head football coach. Or, you can be a coordinator. As I’ve said, the step that I think is so important is to be a coordinator. Because that leads to the head job.”

Above all else, Banks believes that open and honest communication – and visibility of African-American pioneers in the field of coaching – are key to creating a rising tide that will carry all ships.

Banks led the development and introduction of the AFCA Trailblazer Award, which was created to honor early leaders in the football coaching profession who coached at historically black colleges and universities. He spent the greater portion of 2001 and 2002 conversing with coaches, faculty members, administrators and sports enthusiasts throughout the United States, seeking their input as to whether the creation, development and implementation of an award to recognize the contributions of African-American coaches was needed. In November 2002, Banks contacted former AFCA executive director Grant Teaff with a proposal to recognize former coaches from historically black colleges who were overlooked years ago due to segregation and the slow progress in integrating. The proposal was submitted to the AFCA on behalf of black coaches and administrators who were in agreement.

The award was first presented in 2004. Each year, the AFCA selects a coach from numerous nominations provided by historical black colleges, choosing a coach from between 1920 and 1970.

In 2018, the AFCA selected former Morgan State University head coach Earl Banks – no relation to Oree – as its recipient. The award will be presented, posthumously, during the AFCA Honors Luncheon on Monday, January 7, at the 2019 AFCA Convention in San Antonio, Texas. In 1960, Earl Banks took over the head coaching position at Morgan State from 2011 AFCA Trailblazer Award winner Edward Hurt.

The AFCA Trailblazer Award remains one of the most important awards the association gives, and the AFCA named Oree Banks its recipient in 2016. In his opening remarks at the 2014 AFCA Convention General Session, Teaff described the opportunity to select a recipient and present the award as “one of the [opportunities] that I deem most important.”

“I just felt very strongly that we needed to look at – not only the present situation – but all those individuals who provided leadership years ago and have not been recognized in the coaching profession,” says Banks. “The AFCA bought into it without any hesitation. I felt that it was important that we highlight these individuals even though they’re no longer living or no longer in the coaching profession.”

Banks says that along with visibility, open dialogue is what can ultimately eliminate the racial disparity among the leaders of our great game.

“Communication is the greatest thing in the world,” says Banks. “As I tell the black coaches, when you go to the AFCA Convention, don’t go there for entertainment. Go there to network. Get involved in the committees. This coaching profession is a very small operation but we need to make better contact with other coaches.”

There’s an old bit of wisdom than can help clarify the dialogue that must take place among all coaches if the game of football, and its internal constituents, want to take an active role in knocking down the walls that keep us all apart.

The kinds of conversations necessary to give the gift of equality to our great game are often difficult and can force us out of our comfort zones. The words don’t come easy at times. To be honest with oneself about our present situation requires a degree of introspection than will leave many shaken, because it requires human beings to evaluate long-held personal beliefs and values around which they’ve shaped their lives. But, in the words of some of the best football coaches in the nation, it’s time to get comfortable being uncomfortable. It’s a demand coaches make of their student-athletes to help them perform beyond their own expectations. Perhaps if more people were to turn that demand inward upon themselves, we would all be surprised at what we could achieve, together.

Paul Markgraff is the managing editor of AFCA Magazine. If you have questions or comments, he can be reached at (608) 423-2703 or pmarkgraff@threecyclemedia.com.