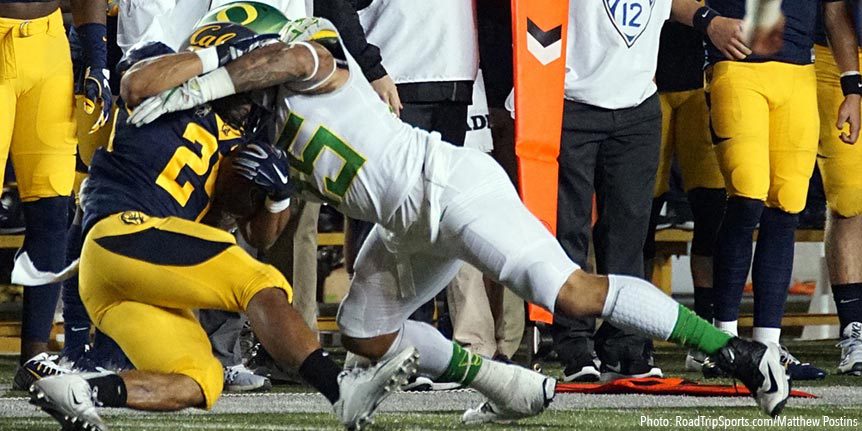 The 3-4 Defense has become a popular defense in football at all levels over the last couple of years – mostly thanks to teams like the New England Patriots, Pittsburgh Steelers and the Oregon Ducks.

The 3-4 Defense affords teams the luxury of disguising who will be their fourth rusher. Most 3-4 teams, however, have to have at least one two-gap linemen.

In the world of high school football, a lot of teams do not have the size on the defensive line to play a 3-4 Defense the way college and pro teams play their 3-4.

The alignment of our one-gap 3-4 Defense allows the defensive linemen to use their speed and quickness because they are lined up in a 4 technique, which discourages double-teams. The alignment for this 3-4 is shown below in Diagram 1. In this defense, there are two basic coverages that are teamed up with a reduction. In Cover 6, there is a weak-side post-snap reduction (where the defensive line slants strong side, while the Bandit blitzes the C-gap.)

In a Cover 3, there is a strong-side post-snap reduction (where the defensive line slants on the weak side, while the Sam LB blitzes the C-gap.)

The safeties make force calls to their side to determine who the force player is. The outside linebacker who is reducing spills the ball toward the appropriate force player.

Within our one-gap, 3-4 defense, we do not assign the Mike LB and Will LB a gap to fill, but rather, we instruct them to read the offensive guard to the near back and attack the play while using the appropriate technique.

The Mike LB and Will LB are taught to use the following techniques against specific reads.

Vs. Drive Block. If the inside LBs see a drive block, they “shock-and-lock” the linemen, locate the football and use a rip move to disengage.

Vs. Down Block. If the inside LBs get a down block, they scrape to the next available gap unless the B-gap opens up.

Vs. Reach Block. If the inside LBs see a reach block, they scrape to the next open gap.

Vs. Down Block w/Iso-Block By FB. If they see a down block and an isolation block by the fullback, they take it on with their inside shoulder and spill the football to the safeties and/or the outside linebackers who are folding.

In our one-gap 3-4 Defense, the strong and free safeties are responsible for making a force call on every play. The calls are backer (buzz/hold), cloud and sky. These calls designate who the force player will be.

The force player in this one-gap 3-4 defense is responsible to turn the ball back inside, while also responsible for the pitch player on an option.

In a Cover 6, “backer buzz” (outside linebacker buzzes the flats) is called by the strong safety if the No. 2 receiver is lined up tight (we refer to “tight” as being less than 3 yards from the tackle), and the strong safety has the freedom to make a lock call to the corner if the No. 1 receiver has a split of more than 10 yards.

This would put the corner in off-man on the No. 1 receiver, while the strong safety plays man on any vertical release by the No. 2 and looks to utilize a robber technique if the No. 2 receiver does not release vertically.

“Backer hold” (outside linebacker holds the seam to the curl to the No. 3 receiver in the flat) is called if the No. 2 receiver is removed farther than 3 yards.

“Cloud” is called by the free safety on the weak-side of Cover 6 and he has the freedom to make a “sky/lock” call versus a large split by the No. 1 or No. 2 receivers (more than 10 yards). In this call, the free safety now becomes the force player and plays off-man on the No. 2 receiver, while the weak-side corner plays off-man on the No. 1 receiver.

The first coverage in our one gap 3-4 defense that we’ll take a look at is our Cover 6. This coverage is in the “quarters coverage” family (quarter-quarter-half to be exact), that allows the strong safety to engage in the run game and play cloud force on the weak-side. This is referred to as a MOFO (middle of the field open) coverage that utilizes Cover 4 and Cover 2 concepts.

If the No. 2 receiver goes in or out at the snap, the safety stems his peddle toward the No. 1 receiver and the corner matches the route of No. 1 without getting out-leveraged by No. 2.

Below are diagrams that demonstrate Cover 6 against a pro formation and a spread offense formation.

Within our one-gap 3-4 defense, our Cover 3 coverage is a traditional Cover 3 with sky force call to the strength of the formation. This is referred to as a MOFC (middle of field closed) coverage that utilizes a post defender (middle third player).

This coverage is great against run-heavy teams because it makes the football spill toward the strong safety.

Below are diagrams of Cover 3 against a pro formation and a spread formation. We’ve had a lot of success over the years with the one-gap 3-4 defense. It is a simple defense to learn and teach, and also allows your players to play fast and be confident in their assignments.

You can always add in different wrinkles to make this defense more diverse, but Cover 6 and Cover 3 are great starting points.

A scheme does not make a great defense. Great defenses play fast, fight to the whistle and finish every play.