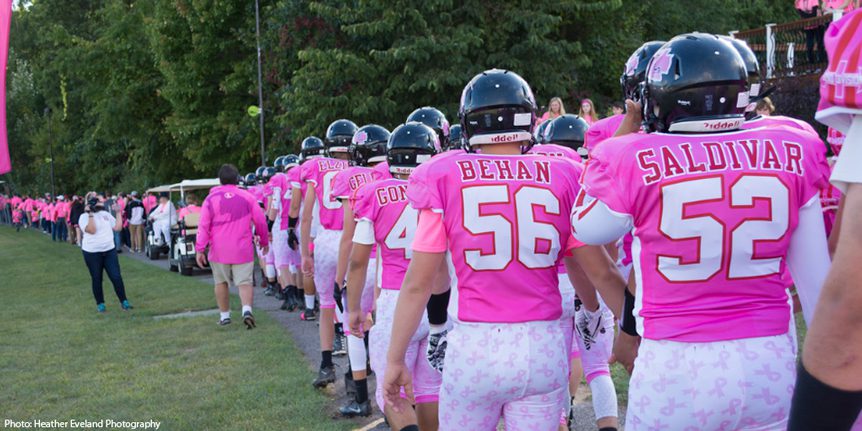 There are ancillary benefits to growing the participation level of youth football within the local community, according to Noel Dean, former head football coach at Lowell High School in Lowell, Mich. Dean won the 2011 AFCF Power of Influence Award, an award that has grown in notoriety and is now officially presented by TeamSnap during the general session of the AFCA Convention.

Part of the reason for his success is that he not only built a high school football powerhouse in a working-class area of Michigan that had no real tradition of winning football, but he somehow managed to parlay that on-the-field success into a charitable organization that struck a chord with the community and grew almost beyond comprehension.

“Lowell is a small, working-class community with great values and our team tries to embody this lifestyle with pride,” says Dean. “We never overly celebrate a victory on the field and we never throw our helmets in disgust or argue with the referees. We always shake hands with our opponents. We’re not a team that shows emotion on the field and we always try to act dignified on the field. In a town such as Lowell, they appreciate the way we handle ourselves.”

Dean is proud of his team’s success, especially in light of the fact that their town traditionally doesn’t produce the most highly touted or most-talented athletes. Without the talent of the larger high schools, Dean knew that one way Lowell High School could compete would be to develop strong, hard-nosed players.

With a roster full of physically tough and powerful players, he implemented a style of play that would cater to that type of athlete. His plan began in the weight room.

“If there’s one piece of advice I’d give to high school football coaches it would be to invest in your school’s weight room,” says Dean. “When I got to Lowell we had one squat rack. Today, we now have 14 squat racks, and our school has won multiple state titles in power lifting.”

With a continued emphasis on weight lifting and physical strength, the Lowell players got strong in a hurry and this approach fit perfectly into Dean’s preferred style of hard-nosed, power football. Dean also says that power-lifting provides a natural sense of competition that leads to players pushing one another and fosters a culture of personal improvement.

“We’re kind of a muscle-head team that plays a very physical style of football,” Dean says. “In fact, we’re proud of the physical nature of our approach to football.

“When you play Lowell High School in football, you’re going to feel it. We’re going to cause some pain. We don’t possess the most gifted athletes in the state, but we’ll work to get very strong. We’re fundamentally sound, we bring all-out effort on every snap and we’ll smack you on every single play.”

The idea for the Pink Arrow program came about simply enough.

“I was watching an NFL game one night featuring the Green Bay Packers and saw a shot of Brett Favre’s wife, Deanna, wearing a pink Packers’ jersey to increase attention to breast cancer awareness and her foundation. Seeing that pink jersey sparked an idea for me to initiate a community service project to benefit people affected by cancer. I mean, everyone knows someone who’s been touched by cancer.

“We felt that we could play one game per year where we would wear pink jerseys, and the players could have a name on the back of the jersey of someone they knew who was affected by cancer. With a team nickname of the Red Arrows, this game with the pink jerseys and the proceeds going to families, organizations and educational programs dealing with all types of cancer easily morphed into the “Pink Arrows Pride” game and charity program (for more information, visit PinkArrowPride.org).

The Pink Arrow Pride game quickly took on a life of its own and grew over the years. Since its inception in 2008, the annual September football game has evolved into a weekend-long, festival-like atmosphere with 5K and 10K charity runs, volleyball games, vendors and a plethora of other money-raising events coordinated around the football game itself. The organization has raised more than $1 million total.

“In a school district with around 4,200 students in all and for a small community of modest means like Lowell, to raise $1 million … for this charity is just an amazing feat,” says Dean. “And our players play their hearts out in this game.”

Dean never imagined that his Pink Arrow Pride charity program could grow into something so big and help so many people. Lowell High School, however, had become such a popular high school football program with such a strong sense of community and goodwill from the townspeople, that Dean felt the time was right to leverage that popularity into something positive.

“At the end of the day – what are we identified as and who are we thought of as people? If I am just known as a guy who coaches football, then I’m not doing something right. I’m pretty good at coaching football and I’ve taught a lot of young players good life lessons, but I didn’t want my own children
to grow up seeing me as ‘just a football guy.’ There has to be something larger than just football.

“I mean, if I’m being evaluated as a person based on wins and losses, then I have no value.”

Much like his father did when he built a church to help his community, Dean says he’s always dreamed of having a successful football program that he could leverage into something that could be classified as doing a greater good for mankind.

“We’ve worked hard to become a fabric of the Lowell community,” he says. “I’m proud that people can say we’ve won a lot of football games and won state championships and that we could have become this big, egotistical bully of a program. But instead, we’ve gone the other direction entirely and done something far more meaningful with this life.”

“I don’t know if enough of us in the coaching world think about the greater good. I know I’m a competitive guy and I get caught up in the competitive nature of football coaching. And I still have a burning desire to win,” says Dean. “But somewhere along the line, we need to take a moment to assess if we are utilizing that inner sense of competition and using who we are as coaches, and leveraging it into the greater good for the greater people.”

In Part 1 of our series, we learned how Coach Dean cultivated a love of football and spawned the growth of youth tackle football in Lowell, Mich. This article was written by Mike Podoll, associate publisher of AFCA Magazine. To connect with Podoll, follow him on Twitter @fcdaily_podoll.