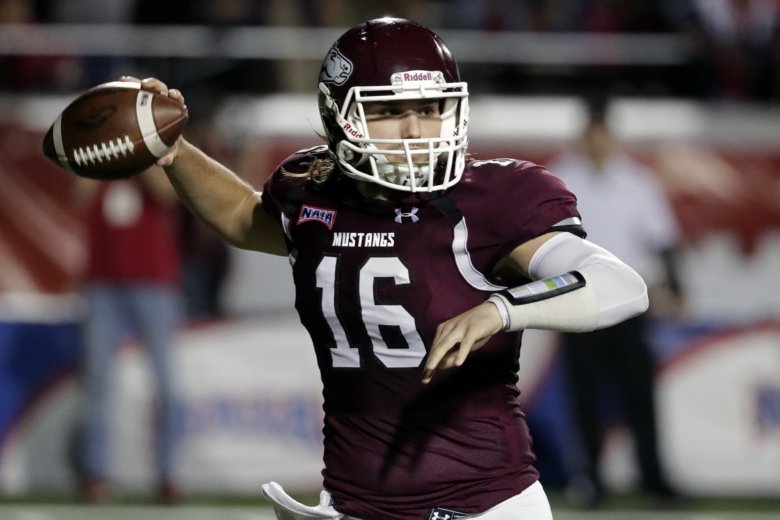 Here at Morningside College, we are a No-Huddle, Up-Tempo, multiple-formation, multiple-movement offense. Our No-Huddle philosophical points of emphasis include:

Less is more; keep it simple. You do not have to be “good” at everything but you must be “great” at something. This is one of our main points of focus as we enter into the fall or spring season. We believe we can control the tempo of the game, by varying our tempo on offense and keeping defenses off balance. Finding the balance between our up-tempo offense and multiple-movement tempo has created a significant advantage for us over the years. Developing a balance between the run game and pass game means keeping the defense honest in all situations.

Lastly, we prioritize efficiency as the most essential part of our offense, move the chains and create momentum. Efficiency at a high rate of speed. It is who we are and what we want to become; fast, playing with a lot of speed while being efficient in the way we go about it. The game becomes more about you and less about them. Can you execute?

There are many benefits of the No-Huddle system, but we want to highlight just three reasons why we believe it is highly effective.

Being No-Huddle forces us to simplify things offensively. By simplifying your offense, it makes you focus on what you are best at. Again, you do not have to be “good” at everything but you must be “great” at something. No-Huddle has allowed us to implement a High-Rep system, which helps us develop players throughout the program, not just the starters. Our second team offense gets just as many reps as our first team. Lastly, we believe the ability to control the speed of the game pressure the defense by wearing them out, forcing substitutions and creating momentum.

One way that we have simplified our offense is by narrowing down the number of run/pass schemes we teach. There is a cost for everything you practice; some things are more expensive than others are. Invest in what matters most to you and become great at it! We want to be a zone team, majority of our reps are running zone. Simplifying your offense also allows you to be flexible in your decision-making as a player and play caller. Having flexibility in decision-making is critical for making adjustments throughout the course of a game and in pressure situations. It is our job as coaches to eliminate uncertainty in our player’s minds and allow them to be flexible and confident with their decision-making process. Lastly, in simplifying our No-Huddle system we feel that we have minimized our verbal communication errors. The amount of verbiage associated with each individual play call has decreased, which allows our players to process the information quicker and execute more efficiently.

We spend just as much time preparing our first-team offense as our second team offense, due to our High-Rep system. The purpose of the High-Rep system is to perform high-quality repetitions at an extremely fast pace. This has allowed us to develop our players more effectively over the years. The system allows our first and second teams to maximize the number of repetitions that they get throughout the week and ultimately throughout the season. It closely simulates game-tempo and forces the players to push through adverse situations. It conditions the players physically and mentally and requires every player to lock-in and focus on every task. The High-Rep system has allowed us to get (9-10) reps every (5) minutes. Most teams probably get (1) rep every (40-45) seconds, that is a total of (7) reps in a (5) minute period. Over the course of a week, that could mean (27) more reps per first and second team over an opponent, and over (270) more repetitions over the course of a ten-week schedule. This system is largely the reason for our sustained success and developing our players for future opportunities.

Control the Speed of the Game

We are a No-Huddle up-tempo offense that utilizes a variety of tempos to take advantage of the defense. There are three basic tempos we use to control the speed of the game:

In Sonic Tempo, we want to try to go as fast as physically possible. We want to use the personnel on the field and put pressure on the defense. Being up-tempo forces the defense to play a game we practice every day. This fast-paced tempo can control the opponent’s substitution and cause the defense breakdown, either in conditioning or mentally. Defenses have a tendency to slow down over the course of the game as well. This helps us control the momentum inside of the game. Sonic Tempo has better prepared us for end of the game situations, such as a 2-min drive. We have noticed over the years that we have been more efficient with our 2-min drives ever since we implemented this tempo. The players essentially practice the situation every day. We also believe that because of the fast-paced tempo we can be more effective at running the ball. By breaking down our opponent physically or moving so fast, that it creates either miscommunication or mental errors for the defense.

Look Tempo or a check with me system gives you or your players an opportunity to see what the defense is doing and get you into the correct play call. In some cases, we will use the tempo situationally to get a cheap five-yard penalty, or a potential big play, or tip a blitz/coverage. Every team may use this tempo differently. We have used Look Tempo differently with different QB’s; it is really up to the coordinator’s preference. Some prefer the QB to make the call themselves at the line of scrimmage (LOS). Others prefer the QB and skill players look to the sideline and get the call from the coordinator. Ultimately, the tempo is a mix-up among our tempos, similar to a change-up or curveball from a pitcher.

The last tempo we mix in is our multiple-movement tempo. We believe each tempo gives us a different advantage over our opponent. As coaches, we discuss before, during and after a game, which we believe is most effective. Utilizing shift/motion can allow you to change from a fast-paced offense to a more methodical and efficient offense at any given time. The purpose of using multiple-movement is to create pressure on the defense and to gain numbers or leverage advantage. Movement on the offense side forces the defense to communicate and adjust as well. Ultimately, taking advantage of mistakes in the process with either the run or pass. The most common mistake to take advantage of is eye discipline. Like Sonic Tempo, this tempo has also better prepared us for end of the game situations, such as a 4-min drill, where shift/motion is most likely to create an advantage for when the game is on the line.

Now we mix all three tempos together. This forces the defense to prepare not only schematically for everything we do, but also prepare for all the different ways we do it. Creating pressure of a fast-paced offense, mixed with multiple-movement, can cause for a breakdown on the opponent side of the ball. Thus, why simplifying your offense is even more necessary. Make sure you can execute! It is more about you and less about them.

Once again, on behalf of our entire staff here at Morningside College, thank you to the AFCA Summer Manual Committee for allowing us to share our philosophical ideas and values with the rest of the coaching profession. We hope that you are able to take advantage of the benefits of a No-Huddle system and incorporate it into your offensive system, just as we have within ours.