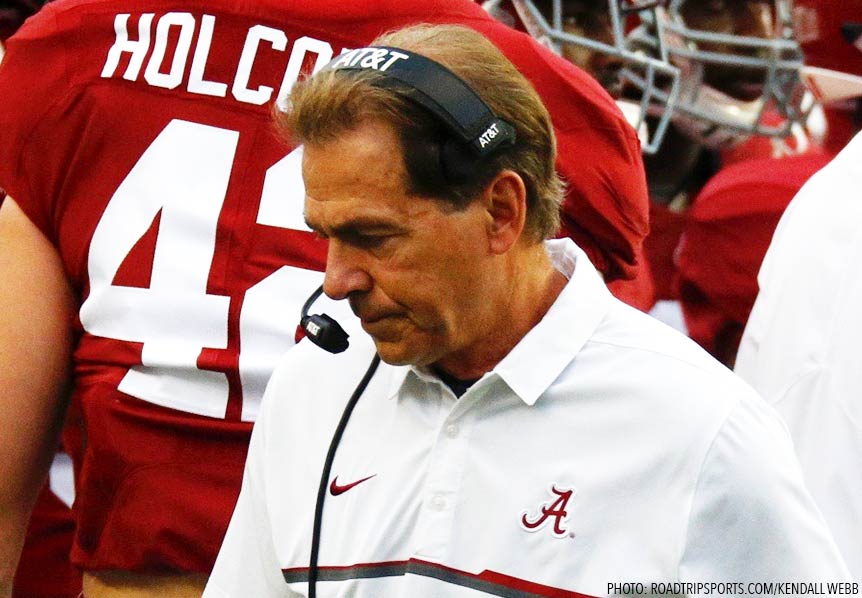 A winner of seven national championships, University of Alabama head coach Nick Saban isn’t one to rank or value one title team more than another. But, immediately following the Tide’s 52-24 demolition of Ohio State in the national title game to conclude the 2020 season, he came close to putting this team at the top considering all they overcame.

“With all the disruptions, no spring practice, no summer ball to develop players, no other games where you can play players and develop others on the team … based on the circumstances, this team has really accomplished a lot,” Saban said in his postgame press conference.

After a few other questions, the topic came up again and he didn’t mince words. “This team accomplished more almost than any team. No disrespect to any other championship teams we had. This team won 11 SEC games. They won the SEC and went undefeated in the SEC. They beat two great teams in the playoffs with no real break in between. … There is quite a bit to write about when it comes to the legacy of this team.”

During the tumultuous 2020 summer, every college conference seemed to be on its own when building toward fall schedules. The SEC, arguably the toughest conference year-in, year-out, decided to forge ahead when others, such as the Pac- 12 and Big Ten, waited to make their decisions, which caused vastly different schedules among the national powers.

Alabama kicked off on Sept. 26 at Missouri, played six straight Saturdays, had three weeks off until Nov. 21, then played five straight Saturdays concluding with a 52-46 victory over Florida in the SEC championship. Thirteen days later, the Tide bottled up Notre Dame, then finished up the 13-win undefeated season 10 days after that by ripping Ohio State, which only had played seven games to date.

Simply to play a full season during 2020’s difficult circumstances was challenging enough (Saban missed the Iron Bowl against Auburn when he tested positive for COVID-19 and had mild systems), but to dominate at every turn seems unimaginable. Saban succinctly summed up how his team did it in a press conference the day after the national title game.

“Adapt or die. Whoever manages these circumstances and situations and disruptions is going to have the best chance to be successful,” he said. “There was a resiliency we all developed because of the constant changes. Everyone had to adapt to survive as a team. They didn’t let these things bother them.”

The Games Must Go On … Safely

Adapting during the season provided Alabama a competitive advantage. But, there were questions about whether to have a season at all. Concerns about the health and safety of the players and coaches, as well as support staff and stadium workers remained at the forefront of the decision-making.

Conferences started either announcing they were shutting down for the season or staying strictly in conference to alleviate some of the travel and contact points around the country. By July 30, the SEC announced conference members would play 10 conference-only games, beginning Sept. 26. An official schedule was released mid-August. Normally, these schedules are set in stone a year ahead of time. Of course, 2020 wasn’t normal.

“This is about the players. I want to play for the players. We have a lot of guys on this team who create a lot of value for themselves by playing this season,” Saban said in an Aug. 24 press conference. “These guys have worked very hard to create and accomplish something as a team. All of those things are important to the players.”

Social Justice Comes To The Forefront

Playing on Saturdays certainly was important to the Alabama players, but before they did that, they took on a cause even more critical to their lives — social justice.

Tide players, along with Saban, led a march in Tuscaloosa on Aug. 31 to protest racial injustice. In June, the team released a video essay called, “All Lives Can’t Matter Until Black Lives Matter,” written by offensive lineman Alex Leatherwood where players and Saban took turns reciting the powerful words of their teammate.

“Through this process, I’ve learned a lot from our players. I don’t get to see the world through the same lens a lot of our players do,” Saban said at the conclusion of the march. “This is what helped me grow in my role as a leader. To listen to the players, to learn from the players and to give them the opportunity to do things that could impact social change today. … I’m very proud of the ‘All Lives Can’t Matter Until Black Lives Matter’ video we did early on that had a very positive impact. It was something we did together as a team. … I’m very proud and supportive of what they are trying to say in a peaceful and intelligent way.”

Once the season did get rolling, Saban continued the evolution of his coaching. “Adapting” has been part of his offensive philosophy since he first stepped foot on the
Alabama campus 15 years ago. During his first seasons in Tuscaloosa, those Alabama defenses stifled everyone while the offense controlled the ball and wore you down.

Now, flip to 2020, and you see how Saban has adapted to today’s game. The Tide, with Mac Jones (selected 15th overall by the New England Patriots) under center most of the time, aired it out much more by passing for 358 yards per game (third in the country) and rushing for 183. All of this led to an incredible 48.5 points per game … keeping in mind every regular season game came against SEC competition. There were no September tune-ups and no late- October, early-November out-of-conference dates with an overmatched opponent.

“We’ve gradually changed through the years to be more spread-oriented but keep pro-style, drop-back concepts with our offense with legitimate play-action passes,” Saban said after the Ohio State game. “This blend … creates balance to be able to run (and to) make explosive plays with play-action passes that complement the runs.

“Our offense was the key to the success of this team. We were an OK defense, not a great defensive team. We played well enough and got enough stops. The offense was dynamic and that’s what made the difference.”

Of course, in true Saban fashion, his “OK defense” allowed 17 or fewer points in seven of 13 games while giving up just 36 total points in the final five SEC regular-season games.

After earning his seventh national title, maybe Saban spent some time away from the game celebrating and relaxing? Definitely not. It’s his constant preparation that has secured Alabama’s spot as arguably one of the best programs in college football history and enabled his players to create the aforementioned value for themselves.

Ten Crimson Tide players were selected in the 2021 NFL Draft, including six in the first round. Saban made sure they were on the proper path the moment the clock hit zero in the national title game.

“The to-do list started after the game last night. Meeting with players … it’s an ongoing process building a team. You can’t fall asleep at the switch for a minute if you want to
do it the right way for your players and your program,” he said in the press conference the day following the national championship. “Next week, we will talk to every player about strengths and weaknesses, things they need to do in the offseason to get better — from a personal, academic, behavioral or football standpoint.”

Regardless of where he may rank the 2020 Crimson Tide, Saban already had turned his focus on 2021 … where expectations are that this group of Alabama players may be hoisting the trophy again.

This article was written by Michael Austin, contributing author for AFCA Magazine.