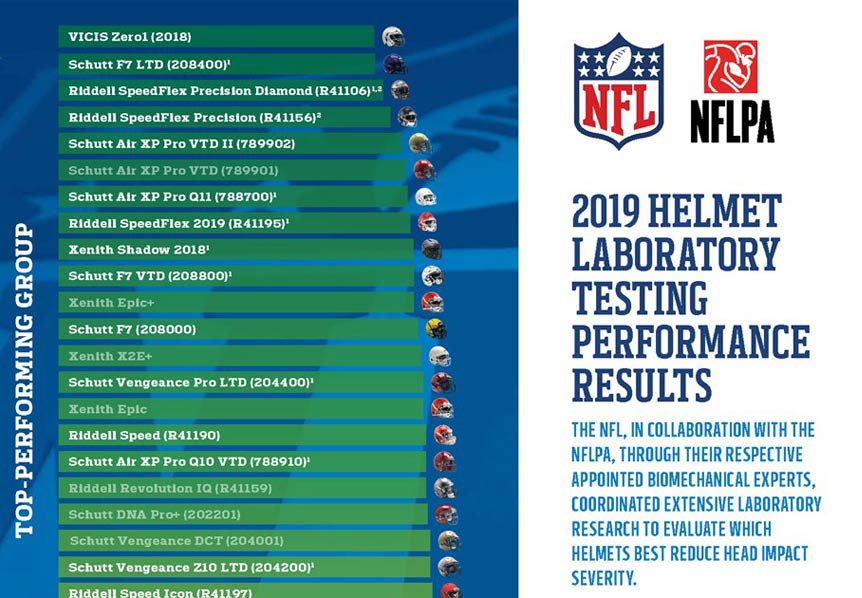 The NFL and NFL Players Association (NFLPA) released the results of their annual laboratory study to assess the performance of helmets worn by NFL players. The results of the tests are displayed on a poster and shared with NFL players, in addition to club medical, training, coaching and equipment staffs to help inform equipment choices. The tests, designed jointly by NFL and NFLPA-appointed biomechanical engineers, simulate a subset of concussion-causing impacts sustained by NFL players during games to determine which helmets best reduced head impact severity in those conditions. The study continues to measure rotational velocity and acceleration as part of a combined metric to evaluate helmets.

The 2019 helmet poster includes the laboratory testing results for 34 helmet models, including the 11 helmets tested this year. Ninety-nine percent of NFL players wear helmet models tested in this study. Helmets that are listed in grey text on the poster were worn by fewer than 1% of all players. Six of the 11 helmets tested this year are among the top-10 rated models, signaling that industry-driven improvements in design, engineering and technology are yielding better results for reducing head impact severity in the tested conditions. All helmets tested met the current National Operating Committee on Standards for Athletic Equipment (NOCSAE) certification standards to protect players against severe traumatic skull and brain injuries.

After issuing last year’s poster, approximately 50% of NFL players upgraded to a better-performing helmet. The percentage of players wearing helmets in the top-performing (green) category increased by one-third to 74% of all players by the end of the 2018 season. Analysis of on-field game concussions for the 2015-2018 seasons showed that players wearing green helmets had a lower rate of reported concussions than those wearing yellow or red helmets. As of the final week of the 2018 season, only 32 players (less than 2% of total players) remained in one of the prohibited helmets.

The tests were conducted by an independent helmet testing laboratory, Biokinetics Inc. of Ottawa, Canada. An independent biostatistician was retained to assist in the analysis of the data. Results were reviewed by NFL Chief Medical Officer Dr. Allen Sills and by NFLPA Medical Director Dr. Thom Mayer.

The experimental design and data analysis were performed by NFL-appointed consultants, including Dr. Jeff Crandall, Director of the Center for Applied Biomechanics at the University of Virginia and Chairman of the NFL Engineering Committee; Dr. Ann Good, Senior Mechanical Engineer for Biocore; and Dr. James Funk, Principal Engineering Consultant and Co-Founder of Biocore and Scientific Coordinator of the NFL Head, Neck, and Spine Engineering Subcommittee. The analysis was done in conjunction with two NFLPA-appointed consultants, Dr. Barry Myers, Professor of Biomedical Engineering at Duke University, and Dr. Kristy Arbogast, Co-Scientific Director of the Center for Injury Research and Prevention at Children’s Hospital of Philadelphia and Professor of Pediatrics at University of Pennsylvania. An independent biostatistician, Dr. Timothy McMurry, Assistant Professor of Biomechanics at the University of Virginia’s Department of Public Health Sciences, was retained to help with analysis of the data.

Note: The results of this study should not be extrapolated beyond the NFL, including to collegiate, high school or youth football.