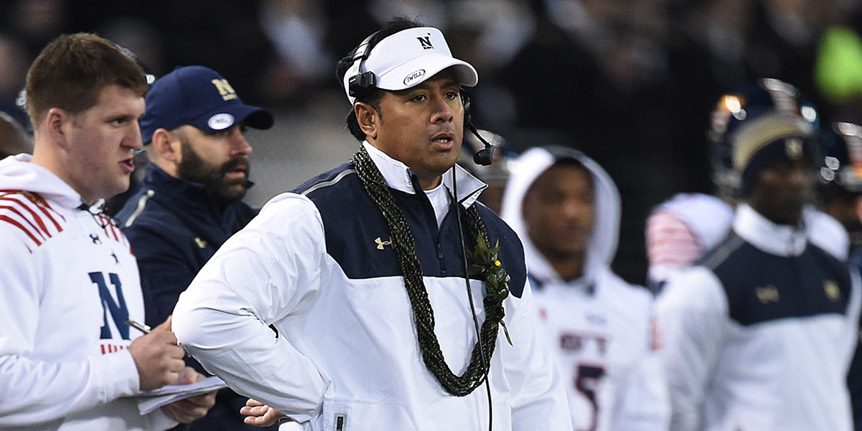 For a branch of the military that spends most of its time deployed at sea and successfully accomplishing water-based missions, it seems strange to describe the U.S. Naval Academy football program in Annapolis, Md., as being “on fire.” But these days, with head football coach Ken Niumatalolo leading the way – Navy Football is absolutely on fire.

Fresh off a 2014 season that saw the Midshipmen go 8-5 and score a thrilling 17-16 win over the University of San Diego in the San Diego County Credit Union Poinsettia Bowl, Niumatalolo has rode a wave of success since he took over the program as head coach in 2008.

In seven seasons manning the helm of Navy Football, and only 49 years old, Niumatalolo has a career record of 57-35. He is the all-time winningest coach in school history, passing George Welsh.

A native of Laie, Hawai’i, and member of the inaugural 2013 class of the Polynesian Football Hall of Fame, Niumatalolo has spent 17 years coaching at the Naval Academy, including 10 years in two stints as an assistant coach on Paul Johnson’s staff from 1995 to 1998, and again in 2002 to 2007, before being promoted to head coach.

For being one of the brightest, up-and-coming young stars in the football coaching world, Niumatalolo is cut from a different cloth. A humble man who wears his spirituality on his sleeve, he is a guy who preaches the tenets of Navy’s credo of discipline and honor, yet also embraces his nature as a fiercely competitive football coach who is, self-admittedly, a sore loser.

Niumatalolo is also a man who takes his dual-role title of “husband” and “father” far more seriously than any football coaching title.

Achieving success as a football coach means different things to different people, depending on your priorities. To Niumatalolo, football coaching is a job. He is quick to point out that his career is not a reflection of his life’s priorities.

“My personal philosophy has always been that I love my job, and I am honored to hold the position I have as head coach in the great profession I choose to work in,” says Niumatalolo. “But at the end of the day, this is just my job – it doesn’t define who I am as a person.

“I have always looked at my coaching career in that light. In many ways, that view has even molded my philosophical approach to the way I coach football.”

The Navy football coach is quick to point out that perspective is everything. He says that perspective steered his vision for balancing his job with his role as husband and father of three children.

“I once heard a lecture from a great coach who has won national championships, say, ‘I want the coaches on my staff to know where our players are at all times and keep tabs on what they’re doing, 24-7, every day they are on our campus and a part of our football program.’

“I sat there, thinking to myself, ‘I don’t want any part of that.’ If you’re monitoring your own football players 24-7, then who is watching your own kids?”

Niumatalolo says that as head coach, he strives to create a culture in his program that values life balance in all areas.

“I want to work really hard at my craft,” says Niumatalolo. “But I think you can also work really hard and get everything done that you need to get accomplished without being in the office, or on the clock, all day, every day. It’s important to spend time being a father and a husband.”

Life balance, according to the Navy coach, not only keeps your players mentally and physically fresh, but it also helps your assistant coaches in the same way.

“I’ve spent a lot of time with many pro and college coaches – and to be honest, some of those guys work such long hours, that they just look dead on the inside,” he says. “They have no energy left to give.

“If your first meeting is at 6 am and you’re leaving the office at 11 pm at night, it’s going to take its toll. We’re all human. How could you possibly have any juice left in the tank when you’re working those kinds of hours?”

The Midshipmen coach insists that being a proponent of a balanced life and preventing his coaching staff from working long hours every day has nothing to do with work ethic or effort level.

“What life balance really means is that we need to maximize our time from the start of the day, until the minute we leave,” says Niumatalolo. “We can’t show up for coaches meetings, grab a cup of coffee and chit-chat for a few minutes about the boxing match we saw the night before.

“We’re going to go hard from the moment we start work, until the end of the day. But then we’re all going home – on time, every day. Go spend time with your family. I think more coaches in our profession need to do this.”

Considering the challenges involved with recruiting football players at a military academy, and physical limitations of
the athletes on its roster – both size-wise and from a talent perspective – the on-field success that Niumatalolo has had is nothing short of amazing.

The head coach of the Midshipmen downplays the physical disadvantages his team faces every Saturday. Rather than offering up excuses, the 49-year-old coach points to an offensive philosophy that levels the playing field and best suits the athletes who play football for Navy.

“With the type of athletes we possess, our success boils down to a simple football philosophy,” says Niumatalolo. “We believe that our opponents will not have an opportunity to score points offensively if their offense is not on the field.

Niumatalolo disagrees with the notion that running the football is an outdated concept at the college level.

“I know everyone’s excited about the up-tempo concepts of today’s passing game,” says Niumatalolo. “And everyone loves the idea of keeping defenses off-balance, confused and spreading them out. But for our team, with the type of athletes we possess, the goal of winning the time-of-possession statistic and limiting the number of times that the other team’s offense steps onto the field has consistently yielded positive results.

“I’m a disciple of Paul Johnson, so utilizing an option offense to achieve our offensive team goals has been a core foundation for my program since Day 1.”

The Option: A Sea-Worthy Vessel

Niumatalolo says that one of the biggest advantages of an option offense is that it’s an offense that not a whole lot of teams face anymore at the college level.

“The option is an unusual offense for opposing teams to prepare for. In-season, they must do so in a short window of opportunity,” says Niumatalolo. “Less than a week between games is not a whole lot of time for opposing teams to coach- up their defensive players on the finer points of defending an option offense.”

Where college defenses see the option offense as an old-school concept and a one-week offensive aberration on their season’s schedule, the Navy football program is a team who’s hung their hat on option football for more than a decade. As a result, the Navy offense has become a cohesive group of experts at running the option.

“It’s not that college coaches don’t know how to defend the option,” says Niumatalolo. “Of course they do.

“Defensive coordinators at the college level are highly sophisticated and those guys know the best schemes and strategies to defend any offense. Opposing coaches must try to teach a defensive end – who has been using a narrow-base, with hips up and rushing the passer all-year long – that for this week’s game, he’ll have to slow down, identify the ball carrier, read the play and use all those types of techniques specific to defending the option,” says Niumatalolo. “ at level of change is a tall order for a one-week-only defensive game plan.”

Adding to the advantage, the head coach of the Midshipmen says, is the fact that many of the concepts needed for defending the option are actually counterintuitive to the way defenders have played during their college careers.

“It increases the odds that a defender will hesitate or make a mistake during any given snap,” says Niumatalolo. “Meanwhile, our option offense is executing at full speed, with minimal errors, while running the ball, moving the chains, extending possessions and chewing clock.”