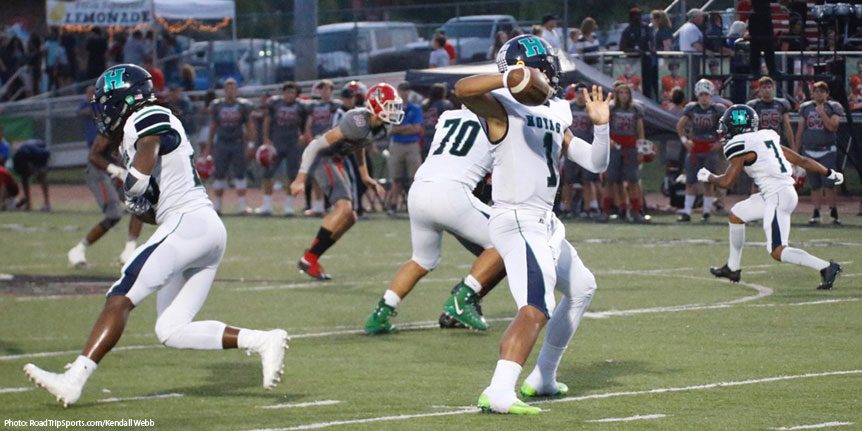 Many parents and student-athletes decide in the off-season that they will seek out the help of coaches and trainers to get a leg up on football skills and to put themselves in a better position to thrive on the field. Football camps where skills can be developed have existed for almost 50 years and have become a regular part of the spring and summer for parents, coaches and athletes.

The role of the outside coach has become something that the high school football coach is going to need to manage and deal with. This new aspect of contracted personal football trainers often makes high school coaches defensive, especially when it comes to the quarterback position. Many coaches fear that this relationship could undermine their work with the quarterback, create unrealistic expectations for athletes and parents, and, in some cases, lead to the transfer of the athlete to a school that the outside coach steers him toward.

However, this relationship between outside football coach and high school coach does not need to be adversarial. If coordinated and structured, great strides can be made in the development of a quarterback and improvement can be accelerated if the two coaches work together.

Understanding The Outside Coach

When it comes to aspiring quarterbacks, many parents will look to find an edge by spending individual time with a personal quarterback trainer. These quarterback trainers can now be found in great numbers in most areas. It is important that you are familiar with those coaches in the area and that you have vetted them and made sure that what they teach corresponds to what you would teach in the high school program. This can be done by going to watch them work, talking with other quarterbacks that have trained with them and by researching their pedigree to make sure they are qualified. These sessions can be frequent or over an extended period of time. The sessions are usually bought in a package, similar to an athletic trainer at a gym.

Some of the personal trainers for quarterbacks are part of national services that come to your area once a year.  They may have a clinic or camp and then offer follow-up services such as game-tape review, Skype calls and other detail-oriented functions. These coaches usually have a large group of clients and cannot spend too much time with any one client.

The choice of outside coach is one that is either going to be made independently of the high school coach or in consultation. If consulted, you want to be able to recommend those that you think would work best. If the parents choose to go and make that decision on their own, it is important that you quickly reach out to this coach and talk to him about his program. The quarterback trainer should be comfortable with your questions and know that one of the best endorsements that he can get would be from the local high school coach. It will help the coach to get clients in the area and go a long way toward the high school coach pointing his players and parents towards that particular quarterback trainer’s program.

Once choices are made and off-site programs are implemented, the high school coach must pay attention to detail with the quarterback trainer’s instruction. For instance, arm fatigue can be a factor in the off-season. This is especially crucial in the spring, when many programs have spring practice and 7-on-7 leagues. It may be helpful to keep the quarterback on a “pitch count” to avoid fatigue. A supplemental approach by the trainer can also help the athlete with injury prevention and treatment after a day of throwing. In addition, getting a quarterback to throw with less of his arm and incorporating the lower body can help significantly in the long run.

There are some cases where a quarterback will need to be away from the team for an extended period of time. Working with a quarterbacl trainer can help prepare the athlete to not miss a beat when they return.

A case in point would be our quarterback Elijah from a few years ago.  Elijah came into our program with the desire to play quarterback, but no on-field experience playing either the position or the sport.  Furthermore, his parents are divorced, with he and his mother living in New York and his father living in California.

Elijah had a desire to be a great quarterback and a positive attitude. During his freshman year, he took to coaching but had some issues with body language and dealing with adversity. In addition, he had some mechanical problems throwing the football, including accuracy, side-armed delivery and a slow release. As a starting quarterback on junior varsity, he had 43 percent completion rate and threw for 7 touchdowns and 6 interceptions.

During the off-season, Elijah would spend all of his school vacation time with his father in Los Angeles. Prior to the first vacation, his dad let me know that he would be working with a coach named Steve Calhoun from a company called Armed & Dangerous. Elijah would not only be working with Steve, but would also be throwing to his wide receiver clients as well. He would do so throughout the vacation in both February and April.  I asked for Coach Calhoun’s information so that I could find out more about him and possibly speak with him on the phone.

I was able to quickly find out about Armed & Dangerous training from the internet. Most reputable trainers will have some type of professional material online for potential clients. These sites usually have testimonials from other people that have used them in the past. I was satisfied that Coach Calhoun could help Elijah, so I reached out to him to speak about his read of Elijah as a quarterback and an athlete, and to also speak about how we can work together to improve his play.

Fortunately, I was able to take advantage of the fact that both Coach Calhoun and I had traveled to attend the AFCA convention in Nashville, Tenn. The convention is an annual event that brings coaches from all over the country together to talk about scheme, strategy and the management of football programs. We set a time where we could sit down and map out a course of action that would lead to improvement for Elijah. I was able to integrate terminology, drills and language so that there would not be confusion. In addition, we worked out a plan to possibly have Coach Calhoun come to the east coast to run a camp for our other quarterbacks and wide receivers.

We saw immediate improvement on arm strength and accuracy after the first vacation. In order to make the trips out west more enjoyable for his son, Elijah’s dad started flying out his friends that played wide receiver to also work with Coach Calhoun. Now, not only were Elijah’s skills improving, but his timing and his chemistry with his receivers was improving as well. The vacations turned into mini-training camps for him and his receivers.

Elijah spent his sophomore season as a backup on the varsity. We were able to get him at least one series per game. The game experience paid off a great deal and he was building the skills he needed to be a starting quarterback in his junior year.

He spent the next off-season continuing to work with Coach Calhoun on his trips to California and was able to bring additional players with him. That summer, we were able to host Coach Calhoun in New Jersey where the players were able to do two full days working with him on skills and fundamentals.

Elijah had some growing pains in his first year as a varsity starter. He threw 65 completions on 139 attempts for a 47 percent completion rate in nine games played that year. In qualifying the statistics, the offense was more run-oriented and featured a tailback that rushed for nearly 900 yards. However, turnovers were an issue and Elijah was responsible for 11 interceptions while throwing only 6 touchdowns. However, he gained valuable experience as a starter and we knew exactly what to work on with our coaching staff, and the west coast quarterback coach, during the off-season.

His off-season was very productive, both during our organized team activities and his sessions during the vacations. I was able to watch a great deal of video that was sent to me by Coach Calhoun and Elijah made great strides with his release, delivery and accuracy. His confidence also grew along with his football IQ.  We came up with a plan to distribute his pass attempts between play-action, quick game and RPOs. We were confident that he would be much improved through the combined hard work of the full-time football coaches and the outside QB trainer.

The results could quickly be seen on the field as his senior season began.  Elijah threw 103 completions on 158 attempts and raised his completion percentage to 65 percent, even though he only played 8 games due to a season-ending injury.  He flipped his TD/INT ratio to 13 touchdowns and 8 interceptions (3 of those interceptions came in his last game).  He went on to lead the league in total completions, while having two receivers that ranked No. 1 and No. 5 in total receptions.

With proper lines of communication, respect for coaching boundaries, and a coachable athlete, great strides can be made when a player chooses to use an outside trainer to improve football skills. Without a good rapport between the school coach and the outside trainer, mixed signals can be sent and a contentious relationship can emerge. I think it is best to always have trusted people that you can suggest when a parent inquires about hiring an outside coach.  You can build that trust and a large network of outside contractors by keeping an open mind and investigating what outside coaches have to offer to your program and to your athletes.