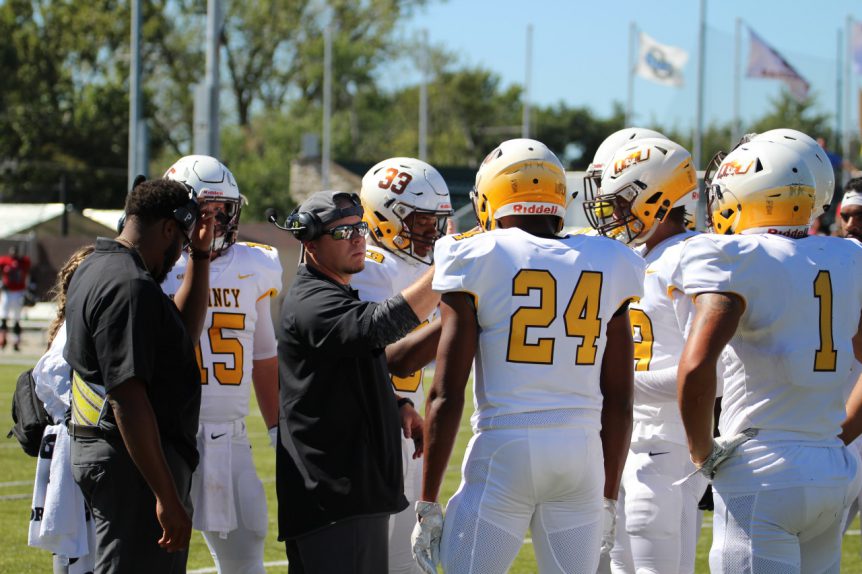 Being a football coach is more than just a job for me, it is a great opportunity to be able to teach young people the game of football.  My name is Sean Kelly and I have been with the Quincy University Football program for 6 years. In my 7 years at Quincy University, I have learned that we are a very multiple style defense, moving in and out of odd and even fronts. With that being said one of our main coverages is Cover 3. Inside our Cover 3 package, we have twelve different variations that we can use to make us look more multiple than just your typical Cover 3 team.  What I would like to go over is the simplicity in which our scheme is so it looks like we are doing a lot but our players do not have very much to learn about the system. Our defensive motto is “Multiplicity with Simplicity”, this allows for our players to do a lot of different things while keeping the system simple enough so they can play fast and make plays.

At Quincy, we like to run Cover 3 for a number of different reasons. We like the number of people Cover 3 affords us in the box versus the run. We also feel as though we are doing a great job taking away intermediate throws and making the offense take low percentage shots deep. By being able to mix how we roll Cover 3 it allows us to possibly plus one the box and have some of our players come free due to confusion by the offensive line and who they should be combo blocking to.

We teach our Cover 3 concept as just your simple Country Cover 3 when explaining it to our players the first time. It’s a base three deep four under coverage, with different people having different responsibilities in our different calls. The rules for our Single players are as follows. Alignment for Single players should be aligned outside tip of #2 with five yards’ depth. They should be keying through the two inside hips in their gap to their backfield key, we call this their triangle read. Single players will always be responsible for “Lane 2” for their run fit. “Lane 2” can be a relative term, since we have a lot of different fronts and stunts that we can combine with our coverage calls the players need to do a good job recognizing which gap will be open to their side that is not taken by a stationary player such as a defensive lineman. Coverage wise Single players are Curl / Flat players and should be keying 2-1. If #2 goes vertical the Single player will collision him and take him vertical unless he has #3 hot to the flats. If he gets #3 hot to the flats that automatically becomes his new #2 and he will continue to keep leverage on that route while getting underneath #1. If #2 goes in the Single player’s eyes should flip to #1 and work with width and depth to get underneath #1. If #2 goes out the Single player will keep leverage on the out while working with width and depth underneath #1.

The rules for our Double players are as follows. Alignment for Double players should be stacked on top of their gap which should be apex #2 and #3 in the formation. Safeties will be at eight yards while linebackers will be at five yards. Most offenses formations will end up in two different scenarios once the ball is snapped, 2×2 or 3×1. Looking at it this way can work in any typical formation from one back, two back to even three back formations.

The deep coverage consists of three Deep 1/3 players, generally taken by the corners and a high safety. The two outside Deep 1/3 players will have very similar rules. Our corners will always communicate what type of receiver sets that they have to their side. They will start by saying how many eligible receivers are on the LOS to their side. They will then denote “Open” or “Closed”, this is determined if the most inside receiver is a TE or a slot receiver. For example, if there is a Flanker and a TE to one side the corner will communicate “2 Closed”. If there are two wide receivers to the side and neither are attached to the line they will communicate “2 Open”. This communication is key not only for them but it also is very crucial for the Middle high safety, just by hearing the communication from the Corners he can determine where his deep threats are and based on the game plan, down and distance where his eyes need to be on the snap.  In Cover 3 our Corners will mainly play out a press-bail technique which gives them the alignment of aligning Press by one yard outside the #1 receiver. If we get a nub set, we will put our corner and a C or D 7 depending on the front called. We can also put the corner pressed up on the TE in this situation by giving a “Nine” call which puts him pressed on the LOS and he is “My man my fit” on the TE.  Deep 1/3 players will be “Lane 1” fits in the run game, nothing is to get outside of them. Coverage wise Corners are 2-1 reads, knowing that they have deep 1/3 with nothing getting behind them. If they get both #2 and #1 Vertical they will only need to midpoint the two verticals if they get #3 hot to the flats.  If the Corner gets some type of “Smash” concept to his side, he is to communicate to the Single player “Buzz” to let him know that he can release the vertical of #2 so the corner can take it over.

We call our Middle 1/3 player our “Money Safety”, he is responsible for playing the middle 1/3 and playing off of the QB’s eyes. Our Money Safety is a free player when it comes to run game and he will be alley fit.

Our main Cover 3 calls are categorized by Outside / Inside rolls based on Passing strength or Run Strength / Tight End. We try to put a lot of word association with our coverages so there is relevance as to what the players are supposed to do.  Our Cover 3 rolls are as follows:

Speed / Walk = Outside Roll based on Passing Strength

Solid / Wow = Outside Roll based on Run Strength

Sink / Wind = Inside Roll based on Passing Strength

Stone / Water = Inside Roll based on Run Strength

In all of our rolls, the safeties will call the roll out using a “Roger” for right or “Louie” for a left call. This way the linebackers and safeties can be on the same page as to where the roll is coming. The linebackers will dictate when the roll is going to happen by moving the string and opening a place for the safety to roll into. We base all of our initial alignments off of a two high shell in order to disguise our rolls for as long as possible. Ideally, we would like to be in our final alignments about one second before the ball is snapped.

With all of these rolls, some of the rolls can end up looking the same depending on what offensive formation we get. Game planning wise when we make the calls we will know the personnel and what possible formations we are going to get, by having all of these rolls we have really broken down four possible rolls to happen based on what we want as a defense and trying to not allow the offense to dictate what we want to do.

By categorizing our rolls based on Inside / Outside rolls it gives our players rules to fall back on. On all outside rolls the safeties know that they are rolling down as a Single player, the OLB to the Roll side knows that he will automatically be a double and the OLB away from the roll knows he will be a Single player. Very easy for our Mike LB for he knows he is always a double player and should always open up away from the roll unless he gets a 3×1 away from him.

On all of our inside rolls, the safeties know that they are rolling in as a Double player. Making both OLB Double players and the Mike goes by his initial rule of being a Double player and opening up away from the roll.  To be able to get the roll we want we will simply give a front and stunt that we want followed by the type of Cover 3 roll we want. For example: Over Sink or Baltimore Hawk Pinch Solid

We also have four other Cover 3 rolls that are not covered in this article. We have two hard corner Cover 3 rolls, Cover 3 replace roll for our Odd packages and a roll based on where the adjuster will end up. I believe having multiple Cover 3 rolls for what you want truly puts you in a position as a coordinator to put your players in the position that you want them in and not necessarily what the offense wants.

Overall teaching Cover 3 has been a big part of our defense as it is what we always start out each season installing. For our system, it is very easy to mold the rest of the defense around our Cover 3 rules. As a coordinator, I believe it gives you a great opportunity the scheme the game you want and allows for your players to play fast and make plays.

Sean Kelly recently completed his eighth season as a member of the QU coaching staff. Kelly spent his first two seasons as a graduate assistant coach and was hired to continue role coaching the Hawks’ linebackers. Prior to the 2017 season, Kelly was promoted to defensive coordinator and was named the recruiting coordinator. While at Quincy, Kelly has been a part of defenses that have ranked 24th in the nation in rushing (2014), 13th in the nation in defensive touchdowns (2016), 29th in total defense (2016), 29th in tackles for loss (2016) and 25th in passing yards allowed (2016). Kelly joined Quincy after completing his collegiate playing career in 2010. He was a four-year member of the McKendree University football team where he played linebacker.